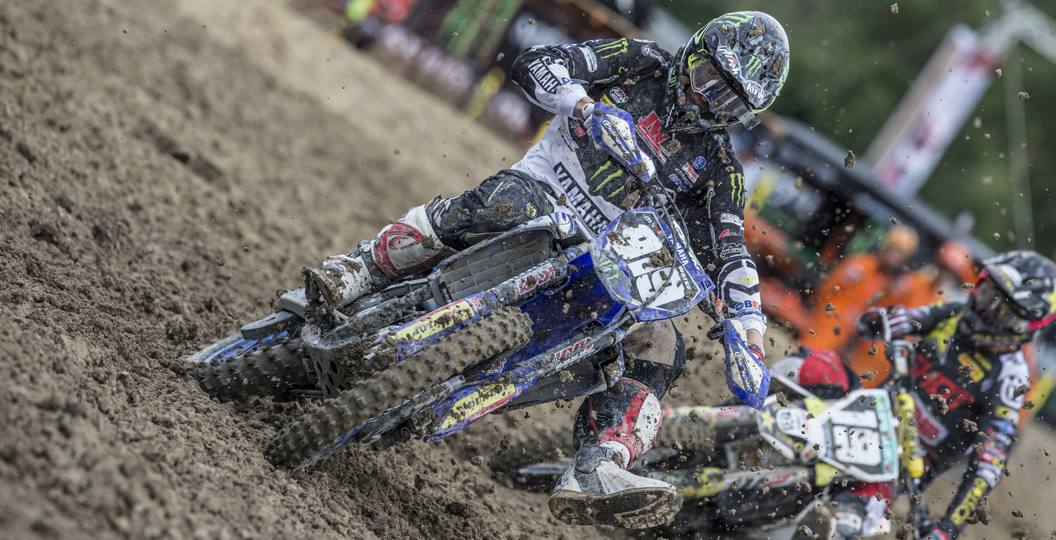 Although Ben Watson ended in fourth overall at the Grand Prix of Indonesia, which is a position that he has become very familiar with thus far, the event was arguably the best of his career. Watson showed intensity, aggression and speed as he battled past some of the established stars in the class and multi-time winners.

MX Vice: Intensity was a problem. It definitely is not anymore, because you were probably the fastest you have ever been today. You missed the podium again, sure, but there is no way you can pissed at that, because this was probably the best weekend of your career.

Ben Watson: Yeah, it was actually my best-ever finish in that second moto. I am over the moon about it, but again I can be gutted because I missed the podium by one point. I made too many mistakes in race one. But, with my riding, I’m really happy. Race one I rode really good; I just did not have much intensity at the start of the race. I dropped back to about seventh and then I crashed on the second lap… [It was] quite a big crash through the barriers. I got back really at the back of the field. It was quite a lot of work to get back to sixth place. I was really feeling the heat and the intensity of my riding.

I put absolutely everything in. I was coming closer to fifth and I made a small crash again with three laps to go. So, with two crashes, I was happy with my riding and the position, sixth, was not too bad. I just kind of took the pressure on myself for race two. I was around fifth at the start. I just rode my own race. I was really aggressive at the start and really aggressive with the other riders. I passed some real top names and I was really happy with how the whole race went. Obviously I came up short to win my first race, but second… I am absolutely over the moon with that.

Obviously, the qualifying race must have given you some confidence. You have been four seconds behind before, but one… You cannot really get closer than that. Did that kind of change your mindset coming into today? Did you have a little more belief?

Yeah. I was feeling like I was in the exact same situation today in race two. I was sat behind [Jorge] Prado and just kind of following him. Yesterday if it was a main race, it would have been a little bit of a different story for me because I would have been a lot more intense. In the qualifying race, I do not think I made one mistake. I really sat on a nice, comfortable pace and I settled for second. I was obviously really happy with that.

So today, to do it in a main race, I was really happy with because I do not know if the other guys knock it down a ton or not for the qualifying, but I did it again and proved that is where I can be and where I should be. We have been working on a lot of things. I have to be really happy with my physical condition and my riding this weekend.

Did anything happen to you out of the gate in the first moto? It looked like you were really far down immediately?

Yeah, I had a really good jump and then I did not have a good run behind the gate. I was in some real soft dirt. The KTM guys… Prado kind of pulled a bike length straight away pretty much. I cut in behind him and then I came out around fifth I think. They cut the first ten gates off, because there are not many riders here this weekend. Prado usually opens his turn up and it was quite safe to go to the right of him this time, because he already had such an open corner.

It was lucky that I worked yesterday for my gate position today and I was lucky enough to be able to just kind of sit on that second gate. Even if I did not have a good jump or a good run down the straight, then I was safe around the corner. I was going to come out top five no matter what my start really. That is what we worked for on Saturday. I am happy.

In that second moto when you were fourth or fifth I guess. It looked like [Pauls] Jonass was kind of holding up that entire pack. You could see Prado was faster and you were faster, then the guys even behind you started to close in. Did you feel like once you got around him, the race started at that point?

I felt that a little bit with more than Jonass, Prado as well. It is new for me to be faster than these guys. It is new for me to be passing them. It has never happened before. This is the first weekend, other than my pass on Jonass in Portugal, that I have been in that situation and it is a complete new feeling for me and something I have still got to learn and something that I have got to kind of get used to and believe that that is where I should be and that I am one of the fastest guys there.

Coming from last year, my best result was here and that was a sixth. So, to be fighting for wins now, it is still really new for me and a completely strange feeling. I just need to believe in myself and realize that that is my position now.

This definitely seems like the official turning point for you. There is no way that [Thomas Kjer] Olsen can discount you for the battle for third in the series. Every weekend now you should be in the discussion for race wins, really. You must feel like now it is time to win one of these things, even if it is just a qualifying race.

Yeah. That will be another massive step for me, when I take the checkered flag, no matter what it is. It is going to be absolutely huge for me. Even if it does not come any time soon, I am not worried. I have taken second I think three times now this year with qualifying included. It is going to come soon, but I am not putting any pressure on myself or rushing myself for that because I have made such a huge step this year with the whole Kemea Yamaha team and Jacky. I just need to keep building, keep patient and be really happy with where I am currently.

Finally, is there anything that you can change or improve now? I kind of feel like you are where you need to be. Do you feel like there is anything you can get better at, even with the bike set-up?

My physical condition is really good. I am really happy and I am confident in every part of that. I feel like I am just getting stronger throughout the year. Obviously, we are past the halfway point now. I do not feel like I am getting a little bit of a lag or anything. I am just feeling stronger and stronger each time. When I get this second, it is just giving me even more motivation for the next week. There is obviously always something to improve. You can be the fastest rider in the world.

I know Jeffrey [Herlings] will be working three days a week on the bike to improve. No matter how fast you are, there is always something. We are just fine-tuning and just trying to get myself and obviously the bike the best it can be. Everybody in the whole team works incredibly hard. It is really paying off. I just need to keep focused on the starts and kind of remember that right now I am in a good position.