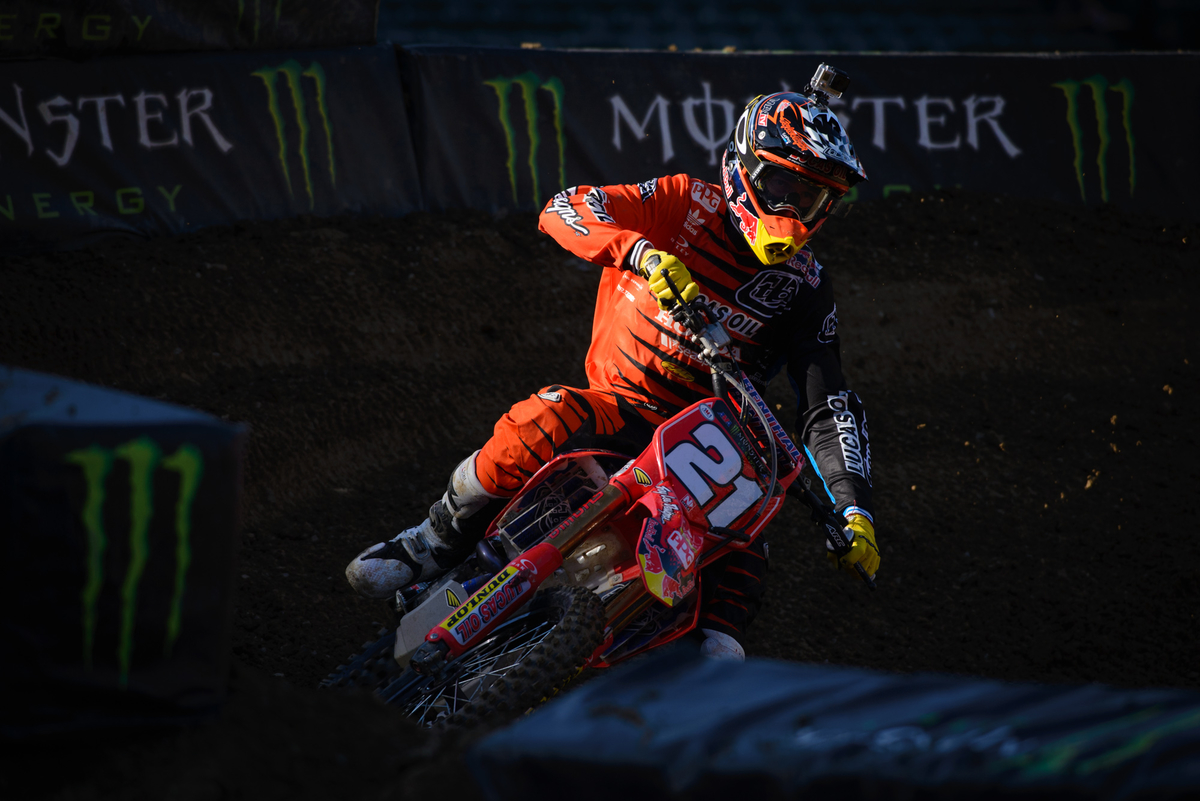 Catching up with: Cole Seely

It looked like Cole Seely would take control of the points lead at Anaheim. But a crash while leading in the final laps meant Seely had to settle for second and a point’s lead tie with Jason Anderson.

Despite the crash the TLD Honda rider was taking the positives from the event after making up a point’s deficit on Anderson.

We caught up with a reflective Seeley to get his thoughts on the night and the prospect of going 450 next season.

MX Vice: It looked like you were on your way to your second win of the year, but just lost the front wheel there…

Cole Seely: Yeah it was going good all night. It was a lot better than last weekend, we had a good week of testing and I was on my way to the win, made a little bobble and lost my front end but luckily I had a big enough gap on third to get second  and go into the next round tied for the points leading the championship.

MX Vice: You had a tough night going with the crash in the heat race but in the main you holeshot and really attacked hard in the first few laps

Cole Seely: The heat race crash, I was dead last I actually was tangled up with my teammate McElrath, it spiked my heart rate and got me going for the night, it’s cool to ride with that much aggression and know that I can. It almost benefited me in a way. Luckily I made it to third and got a good gate pick.

MX Vice: Looking ahead it’s almost like a brand new season being level on points with Anderson for the lead, is it good to be back in there again.

Cole Seely: Yeah well I was never out of the points hunt really, I want to stay right there and take it race by race. I try not to think about the big picture and just attack each weekend like it’s a fresh weekend. We are in this thing to win and I am not going to sell myself short of that.

MX Vice: Are you looking forward to racing Anderson on the last lap again to show you can beat him without him getting you from the blindside?

Cole Seely: Yeah, I don’t know he races really aggressive and I think my teammate Malcolm wasn’t going to stand for much more of it, I haven’t seen it yet but I heard he was being aggressive again and Malcolm went into his line (laughs). I don’t know what happened. It‘s racing it’s going to happen and now we are tied for points.

MX Vice: The 450s, you have proved you are good on that bike with some good results, are you looking forward to racing in the big class or are you just focused on the winning the 250 title.

Cole Seely: Right now I am just focusing on the task at hand and I will worry about the 450s next year when I move up. But I am excited to ride a 450 full time because I love the power of the bike and how well it fits me.