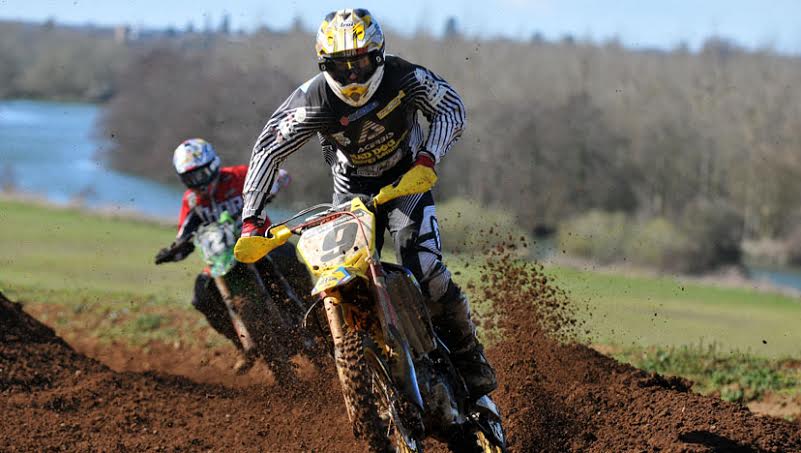 Catching up with: Stuart Edmonds

Stuart Edmonds has had a tough last few months.

From the moment he crashed while running third in the first British Championship moto at Foxhill last year, Edmonds career has been on pause.

His wrist was so badly injured he was ruled out of the rest of the year and had to miss his favourite race of the year, the Motocross Des Nations.  Throughout that time Edmonds was desperately trying to get movement back in his wrist and despite a depressing prognosis from the doctors, Edmonds has managed to regain full movement and was able to finally get back on the bike this winter.

But it wasn’t on a TM, Edmonds made the switch to Suzuki but stayed on the same Mad Dog/CCR team that he was happy in the year before. It has been a bit of a battle for Edmonds to get back to his previous level during the winter but he is making progress and most importantly is back having fun on the bike.

Edmonds clearly loves the sport and that child-like enthusiasm of  just loving riding a motocross bike really shines through in every time you speak to him. Edmonds is still a big fan of the sport like the rest of us, he just happens to be really good at it too!

We caught up with the always friendly Dubliner at the John Donnelly memorial at Downpatrick where he finished second but still maintained it was the most fun he had on a bike all year!

MX Vice: Last year at Foxhill on the TM you were having one of the best rides of you career but take us through that crash…

Stuart Edmonds: Foxhill was a mega weekend, I was just enjoying myself we had made few adjustments to the bike and I was calm and collected. Qualifying went well and I was happy with that and got a mega start in the first race and then just failure I suppose! I went over the handlebars, front wheel down and with Foxhill being so hard something had to give and it was my wrist.

I had no control over it unfortunately but it was great to see my pace  and be able to keep up with Matiss and Kristian. At one stage I was catching them a little bit I felt but towards the end of the race I made a mistake I think it was maybe three laps to go and then on the last lap I had that crash.

It was unfortunate for me but these things happen I suppose. I have gotten away with it for enough years I think it was ten or twelve years I’ve never had a big injury like that. I’ve injured my scaphoid and things like that that would only have me out for a few weeks. So that was my first major operation.

MX Vice: Was it a bigger injury than you initially expected?

Stuart Edmonds: Straight away I thought it was dislocated and I was telling the girl on the side of the track to pull it out. When I got to the hospital and they did the X-rays they said it was an unbelievable dislocation and break. They had never seen it before, there was some part of my hand that was round the front of my palm, they were calling specialists down and stuff like that. It was a bit of shock because I thought they could just put it back into place and let me go home but they were like, ‘no you need operations and it’s going to be eight or nine months.’ So it was a big shock to my system all at once.

MX Vice: That meant you couldn’t ride the Nations, an event you love and always do really well at.

Stuart Edmonds: That was gut wrenching one. That was one of the hardest decisions I have ever made to do with racing. I really wanted to ride and I was getting my movement back and in the physio every day and Brian Curtis was really nice to supply a physio for me. He was working really hard with me and getting everything sorted. It’s got to a stage where I have  full movement in my wrist but they had told me I would only get 25% each way. By the nationsl we had well more than that but the problem was the strength and no bike time.

I decided it would be better for Gary to go than me and I rang Laurence (Spence) and that was probably the toughest phone call I ever had to make. But I am delighted I made that decision because it gave me proper recuperation and a proper rest. I got to do things I hadn’t done in a few years, sit back and relax a little bit away from racing.

MX Vice: Moving unto year and you are on the same team but a change of machine to Suzuki. I guess it’s just been a case of trying to get back into race pace and race fitness.

Stuart Edmonds: Yeah I am delighted with the team, Mad Dog CCR Suzuki, the energy drink Mad Dog have been brilliant to us and Suzuki GB have helped us out as well. I have my mechanic back Phil.  It’s good to have these people around me, all my sponsors are really good.

It’s nice to be back on the yellow bike as well, I am really enjoying that  with college I am there during the week so I am only getting out on the bike at weekends, but the progression we made from the first weekend we went out to the say the end of January was unbelievable. I was so pleased at how I was going.

We just hit a little speed bump I suppose a couple of weeks before the British but maybe I am being hard on myself. Race time is completely different to practising, I think I jumped the gun a little bit and I just need to sit back and let it flow and get more races under my belt.

MX Vice: The first British at Landrake, were you happy with that?

Stuart Edmonds: I was happy enough with qualifying, I got 13th and just got pipped by Elliott to 12th on the last lap which was unfortunate for Superpole.  I had a microwave pasta thing to get some fuel into me quick and let’s just say I destroyed a toilet before the first race!

Halfway through the first race I was around ninth or something but I just went backwards because the cramps in my stomach and that was it, I struggled to get food and water into me the rest of the day and was dehydrated all day long. I’m not using it as an excuse I still rode the best I could all day but it was definitely challenging.

MX Vice: How did you find the MX Nationals at Culham?

Stuart Edmonds: The MX National was brilliant, the format was great. Obviously it was their first round so they have to learn bits and pieces. It was unfortunate that there were so many crashes and I hope everyone is ok that did crash. But I thought  it ran brilliant, the format is quite good, it isn’t too pushed together, you are waiting around a little bit but not a major load.

My racing as such didn’t go too well but I think everyone had an up and down weekend because the track was so rough! With MX1 and MX2 being mixed together and all scoring the same points, with the Red Bull Pro national you were thinking, ‘ right that’s an mx2 rider if I stay behind him it’s not too bad.’ But now you have to really push and the MX2 guys can go places the 450s cant’s and vice versa it’s the same for them so sometimes it’s hard to get past people.

But I think it is good viewing for spectators I would say the racing was brilliant to watch s ii just have to look forward to next weekend at Lyng and progress forward.

MX Vice: And just quickly about today at the John Donnelly you were close but not quite close enough I guess! But your riding was really good today.

Stuart Edmonds: I came here to get extra testing and riding time. I really haven’t been enjoying myself on the bike and I don’t know what it is, I think I am just being too hard on myself. But today I had a mega time, it would have been a bonus if I had of won but I had a great time, enjoyed myself and tried new things with the bike. We were going forward it was unfortunate the second race was red flagged I hope Dicky is ok.

Then the last race I was just pushing too hard and made stupid mistakes. It took me three laps to relax and then I closed up on Gary but sure it was too late then. I have to give it too him he was riding really smooth and really well but today was great fun and it was nice to back out and doing a home race.

MX Vice: Is that in the back of your head that you and Gary might be fighting for Des Nations spot at the end of the year, you are very close in speed.

He is riding really well and he is going to be competition. But I am not worried about Gary it is nice to see someone from home to do well and it would be great if we could both do well this season as well as anyone else from home.

Michael Mahon is also riding well at the minute, I know what his speed is like he comes riding and training with me and it would be nice to see the local boys do well in England.

But no, Gary isn’t in my head at the minute but I have to give it to him, he is riding well!