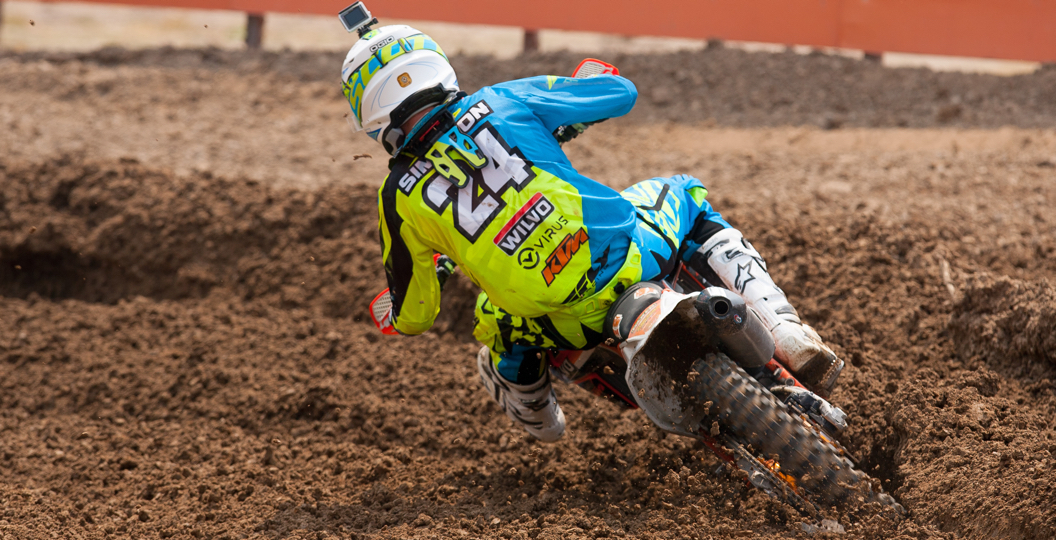 This is the sixth year that Shaun Simpson has competed in the FIM Motocross World Championship on a 450F, but he continues to make progress each season. Following a consistent set of results at the opening two rounds, we caught up with the knowledgeable Scotsman to get his taken on a handful of different topics.

MX Vice: Were you riding angry in that second moto? It looked like you were fired up after the first one!

Shaun Simpson: Nah, that isn’t something that I do. I’m a little bit too sensible for that, I would say. I was just riding more fluid on the first couple of laps and feeling it a lot more. I was just like ‘right, I need to see if I can get around Romain’. I really felt like I could have done something! I just had to calm myself down, make sure the guy with the big hammer didn’t come and not totally hit the wall. I went at my own little pace, I’m quite good at gauging how I will be able to finish a moto.

A prime example of that is Lommel last year, when Gautier rode away and it looked like he was going to piss it. I just kept going and caught him up. That was my pace today, I just felt like a different rider in the second moto and was throwing it around a lot more. I took a few different lines, some of them worked and some of them didn’t.

I was a little concerned when Townley, Nagl, van Horebeek and Gajser came past, because I thought it could be a disaster and I would just keep going back. Whenever someone got around me I was able to tag on, so the pace was there. We’re going home, have a couple of weeks off, there’s room for improvement and we’ll be there.

MX Vice: When I spoke to you at the end of last year you said that one of your main goals was to start strong this year, as you felt like you had started a little slow in the past. You’ve done that, so I’m guessing you’re happy?

Shaun Simpson: I would say so. If you’re not winning, you’re always looking for more, and that is what makes us riders as good as we are. We are going home with a solid amount of points and feeling like we have started strong, but we also have a checklist of what we need to work on. Adam is out now, unfortunately, but we’re able to really focus on myself before Valkenswaard, where we’ll try to come out swinging and grab our first slice of podium pie.

MX Vice: What did you think of the track this weekend? It obviously received mixed reviews.

Shaun Simpson: In conditions like this, you need to look forward to what the track is going to be like on Sunday and take it on the chin on the Saturday. It was really deep yesterday, but at least you knew that the moisture was there for today. That was one of the main positives from yesterday, they got the track dialled in reasonably well. Us riders had a bit of a team meeting last night and said a few things that they could improve on the track, which they did. The track wasn’t bad, considering the heat, humidity and everything we have here. It could have been better, but in these conditions I think it was pretty good.

MX Vice: You obviously heard about what Ben Townley said yesterday. Do you think you’re a little more positive about the track here, because you can compare it to what we had in Thailand last year? Obviously it is considerably better than that.

Shaun Simpson: Yeah, I would say so. Don’t get me wrong; I think that, as a facility, there has to be better places than this to go to. My personal opinion is that Si Racha, the track that we went to two years ago, was a great facility. There was elevation and places for the crowd to actually watch, which created a bit of an atmosphere. There was a festival going on here, which seemed to be the main attraction for the locals rather than the racing. The whole vibe about the place was a bit better, because that was here, but if it wasn’t who knows what it would have been like.

It is still a dustbowl and the mechanics are still working out of an easy-up. I would like to say that I’m with Ben on some of the comments that he said. It is just unfortunate these days that it doesn’t matter who speaks up or how they do it, it is sort of frowned upon. That is a shame really, because they are listening to us on one side with the track prep, but on the other side they don’t take negative comments well.

The comment that Giuseppe said back to Ben was that he doesn’t say bad comments about the riders and he didn’t choose his timing right. Well, when is the right time to say it? Someone has to have the balls to step up. It is just a shame that a lot of people are just happy to go along with it. It has opened a big can of worms this weekend and we’ll see how things go.

When we get back to Europe, I expect to see really good track prep at places like Valkenswaard and Arco. They all want to be on point, because they don’t have this kind of heat and temperature to deal with, so I would say we are looking for them to be mega rather than just average.

MX Vice: Do you feel like Rui Goncalves’ new role, as a rider liaison for Youthstream, is actually making a difference?

Shaun Simpson: Yeah, I think we made some progress this weekend. For years they haven’t ripped waves at all, they have just left them polished. Today we saw them actually fluff them up a bit between motos and do the same with some of the corners on the racing line, in an effort to open up the race track and make the riders be a little more creative. I think that worked well today.

I think that Rui has stepped up to the role quite well. It was nice that we had a bit of a team talk there, where he said he wanted to do the same every week. I think it will be hard to get all the riders together once we’re back in Europe, but if he can get half a dozen riders together per GP I honestly think there will be some improvement with the tracks. I think that is what needed to happen; there needs to be more rider input when it comes to the track. They definitely need to be looked after more and, overall, the preparation coming into the weekend needs to be better.

They need to be watering the tracks on Wednesday, Thursday and Friday. We arrived at Arco last year and they started watering on Saturday morning, there hadn’t been a drop of water on it before that point. That is just too late, as the moisture doesn’t get into the ground. There is room for improvement there.