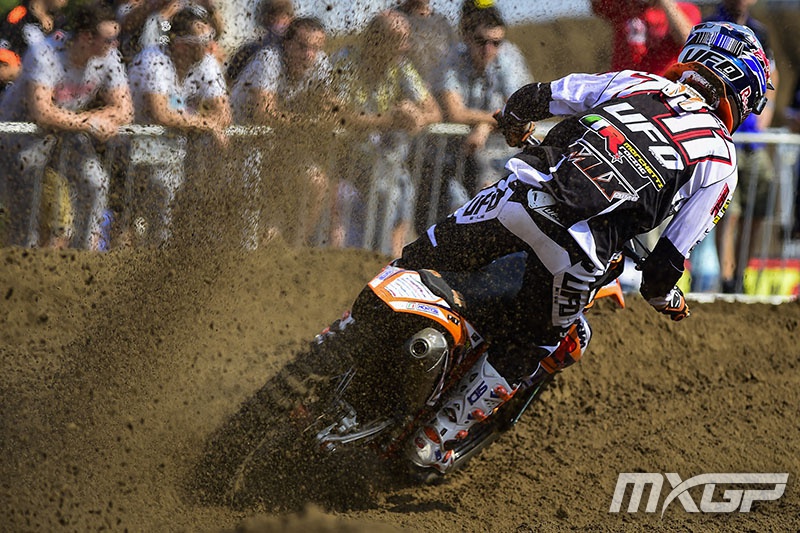 Catching up with: Pauls Jonass

17 year old Pauls Jonass is one of the next potential hotshots in GP motocross. The EMX125 champion from last year was expected to come in and challenge for the EMX2 title this year but illness meant Jonass never had a chance. Now fully recovered Jonass is concentrating on the MX2 class at GP level and at Lommel had two cracking rides to score ninth overall.

Jonass has also been signed to the Red Bull KTM factory team as Jeffrey Herlings’ teammate next year. With a winters’ training under Everts and factory bike at his disposal Jonass should be one to watch in 2014. But before then he still has the MXDN in his home country of Latvia to look forward too where he could turn some heads again on a home track!

Andrew McKinstry spoke to Jonass about his season and his hopes for the future.

PJ: Yea for sure, it was maybe not the biggest one but it was a very good year for me. I won the European and world championship and it was huge. Three years ago I won the 85cc World Championship and the German championship (ADAC). But for sure I think last year was one of the best years in my career.

MX Vice: Going into the last year did you believe you could win the title or what was the plan for you?

MX Vice: At the start of this year the plan was to race the emx250 championship, how did them first few races go for you?

PJ: Yeah it was not so good, I suffered a crash in Italy in the first GP when I did MX2 and after that I had problems with the neck and also after three laps I got arm pump. My riding was also very bad but that is why I decided to ride MX2 for the rest of the year to get experience for next year and I will keep building the fitness and the speed, step by step it is getting better.

MX Vice: Earlier in the season you had health problems, can you explain that situation.

PJ: Yeah actually still I don’t know what was wrong but I think it could have been from over training. My body was so weak I had much pain so it was tough.

MX Vice: What is your opinion of the speed of the MX2 class?

MX Vice: What do you have to say about Jeffrey Herlings then, somehow he can win some motos by over a minute.

PJ: Yeah, he really is a wonderkid (laughs), he’s so fast and so smooth with the bike.

MX Vice: Next year you have signed a deal to be Jeffrey’s team mate and ride Factory KTM, you must be buzzing about that!

PJ: Yeah, KTM asked me if I want to be his team mate and sure it’s the best deal I could wish for and I was very surprised when they asked me but yeah it’s very very nice to get this ride.

MX Vice: Next year you will be working with ten times world championship Stefan Everts.

PJ: Yeah now I am also working with him, for one month I think now. I will work together with him all winter and also with his physical trainers and everyone.  They will try to build for me to be champion in the future.

MX Vice: Going into next year what are your expectations or will it be another learning year as you have only rode a few gp’s this year?

PJ: Not the biggest of expectations, I just want to learn and try to get the speed to try and be the top of the class in the future.

MX Vice: The nations coming up, has the Latvian des nations team been picked yet?

PJ: That’s a good question because I think maybe I ride or maybe not because the team manager said to me that I need to ride but they don’t want to give the money to take the team and bikes to Latvia but for sure we will see, I think I will ride.

MX Vice: If you get to ride there you must be pretty excited to race the nations in your home country and against the Americans as well?

PJ: Yea not really against the Americans but for sure a home nations will be pretty special for me.

MX Vice: Long term will the plan be to move up to mxgp or would you like to go to America?

PJ: Right now I really don’t know; we will see how it goes but for sure the dream is to go to America but we will see what happens in the future.