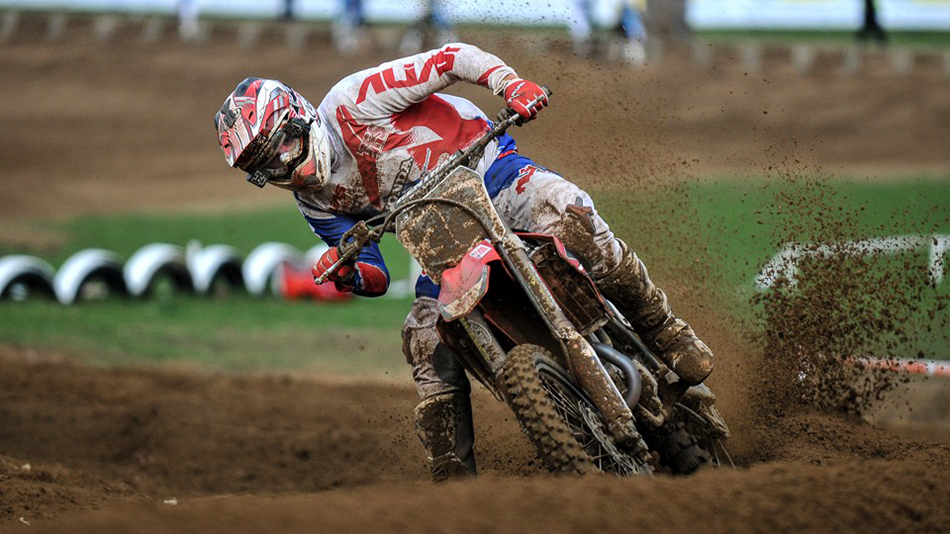 Catching up with: Matt Moffat

JAR Honda’s Matt Moffat has taken his racing to another level in 2014. The move to World Superbike rider, Jonathan Rea’s Honda racing team, has already paid big dividends this season.

Moffat has been flying from the very first round of the Maxxis British Championship at Landrake where he showed he could run comfortably inside the top ten. He did the same again at Lyng to show everyone he is for real this season. Moffat’s speed isn’t just every so often or in the odd moto – it is every week!

And last Easter weekend he proved his fitness is on point too. After two days at Fatcat with the MX Nationals, Moffat then raced the Ulster championship at Desertmartin and was one of the fastest riders at the end of the races – even catching Irwin in the final moto!

For Moffat this still seems to be a slight shock to the system, he has the ambition but you sense that with each passing result his self-belief is getting stronger. Moffat is slowly but surely realising he isn’t a rider on the periphery of the top guys anymore – he is becoming one of the top guys!

We caught up with the JAR Honda man at Desertmartin at the end of three days of hard sand riding on two of the roughest tracks in UK!

MX Vice:  After switching to Honda you seem to have really gelled with the bike, are you pleased with how everything has gone?

Matt Moffat: I am really happy with the way season has started out with the new team and the bike. It is a big step forward from last year. I really like everything with the 450, it just took a while to get set up over the last couple of months and it’s just really now that I have started going. I like it and it’s really good.

MX Vice: You are known as the two stroke guy was it hard to adjust back to the 4 stroke?

Matt Moffat: I do rev it a bit too much in places! Last year I had at KTM and the 250 two stroke so it is quite good I am just sticking to one bike, it’s definitely an improvement and my results are getting better.

MX Vice: You definitely one of the surprises this year, your results have really improved. Was it a surprise for you or did you know you had that speed coming into the season?

Matt Moffat: I have had some good qualifying and I had been top ten before but this year I have been there every weekend, so I have surprised myself a little bit with my speed. I think I lacked a bit of fitness at the start of the year but I have been working really hard on it in the last month and I want to be top ten in the championship, that is my aim.

MX Vice: The starts seem crucial in the British!

Matt Moffat: Yeah and I haven’t been getting good starts in the British. But we have a couple of things we are going to try on the bike for Foxhills and I’m looking forward to seeing if we can get stuff going for the rest of the year.

MX Vice: How did you get on at the MX Nationals at Fatcat?

Matt Moffat: Yeah Fatcat was good, it is a local one of me and I go pretty quick round there I had a good qualifying time, in the first one I had a badish start outside the top ten and came seventh. In the second one I was in a comfortable eighth, it was stupid – my own fault. In the last one I got out of the traps in fourth, it was my best start all year but stalled it around the first corner and was dead last. I got back to eighth and passed all the 250f guys. Whatley and Irwin were just in front of me.

MX Vice: You must me really confident at the minute. Your pace is so consistent it doesn’t seem to matter what type of track you are on, you are up there.

Yea, the help of the team has helped me out loads. I am not stressing about getting stuff down before the races. I have more time to relax, it is gelling really well and I am enjoying my racing which is the important thing.

MX Vice: And just on today, your third day of racing in a row and three more hard races!

Matt Moffat: Yeah it was three hard races. I let myself down in the first one with a stupid little crash but in the second one I won quite comfortable, obviously Irwin was chasing me down. In the last one I had a bad start but after ten minutes them guys were knackered and I felt I had the pace to go on another ten and I did, I was catching Irwin, which shocked me a bit.  But I was pulling him in and pulling him in, I wanted to passs him -that was my aim. But yeah I can’t complain I had three good days.

Matt Moffat: Yeah I have been working really hard but I shocked myself a little bit today ( at Desetmartin) and yesterday (at Fatcat). I feel good for Foxhill, I have been doing a lot more running and cardio instead of bits of weights so I have trimmed up a bit! (laughs).

I just want to thank the JAR Honda team for helping me especially Jonathan and my dad and everyone else – thank you.