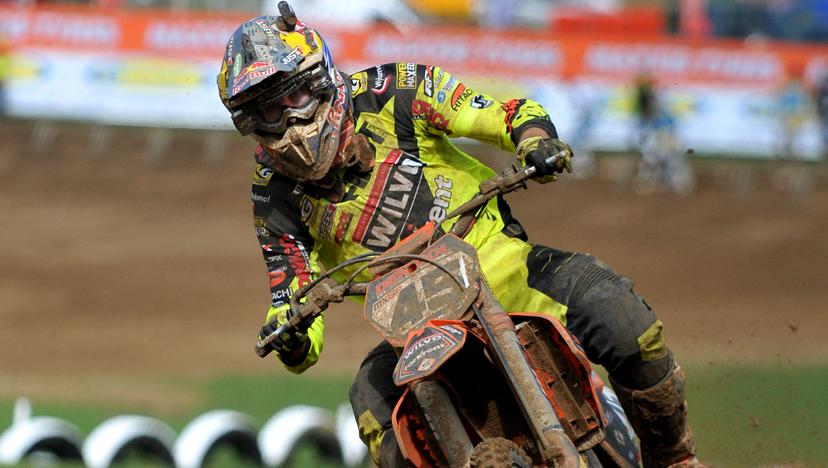 Despite the fact that he came into the season injured, Jake Nicholls has been a threat for wins since the first gate drop at Landrake. Although he has not won an overall (yet), it is only a matter of time – he is just as fast as the series leader. Following round two at Lyng, we caught up with Jake to find out how his recovery is coming along, among other things.

MX Vice: You have to be happy with second overall today – it was a good day for you.

Nicholls: Yeah, it was good. I wanted to win, but it was great to come away with second overall. I only lost two points in the championship, and I got another race win. So, yeah, it was pretty good really.

MX Vice: What happened to you in that first race?

Nicholls: The chain stretched, and then it started jumping off of the sprocket. It started to do it in the second race, too, but luckily there was only two laps to go, so it didn’t really affect me too much. But, that cost me the overall today. I’m not putting any blame on anyone, it was just a faulty part really. It’s a shame, but we’re coming away safe, and learnt some more on the bike. We need to change the suspension a little bit, but I’m happy.

MX Vice: Are you one-hundred percent now, or are you still recovering from the back injury?

Nicholls: My back is a little bit weak, but it is not painful or anything like that. So, there are no excuses there. I’m bang on there, really.

MX Vice: So, it’s all about building yourself back up into race shape now?

Nicholls: Yeah, the intensity is getting there now, with my racing. The back is getting stronger now. I started to feel it a bit at the end there, because where I broke it is right at the bottom, But, it’s getting better all of the time.

MX Vice: After two rounds, are you feeling confident about this championship? You’re obviously in a really good position.

Nicholls: Definitely, it’s nice and close. I’ve beaten Shaun (and everyone else) straight up twice. So, I think it’s going to be this close all year – it should be good.

MX Vice: Does it give you more confidence running with Shaun here, because you know that you can be comfortably in the top ten in the MXGP series when you are one-hundred percent?

Nicholls: Yeah, that’s it. It helps, definitely. I’m so pleased I’m doing this championship for that reason more than anything, really. It’s helping me push myself each week, whereas I could be racing riders that aren’t in the GP’s – no disrespect, because they are good too, but it’s good having Shaun here.