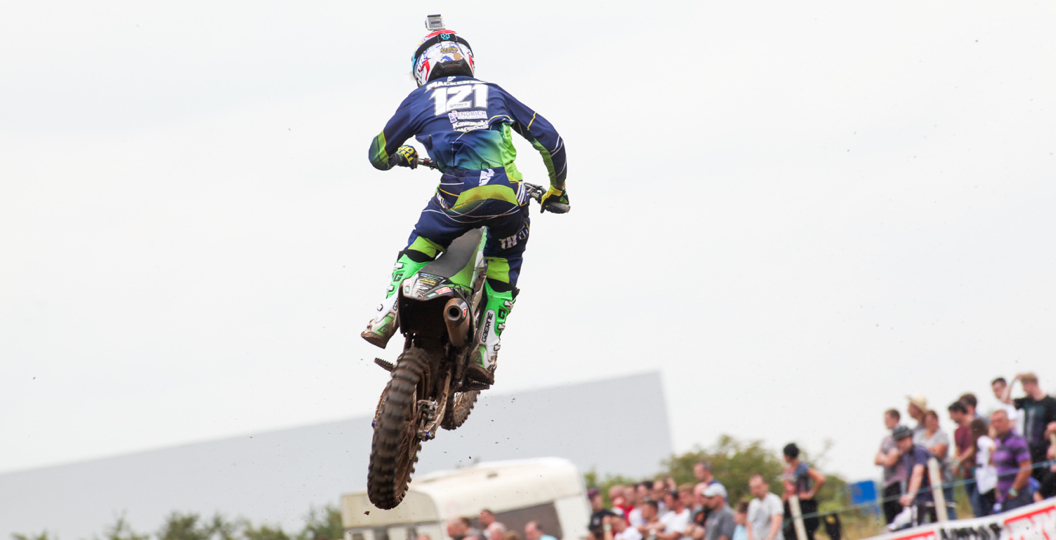 Catching Up with: Bryan Mackenize

Although Bryan Mackenzie’s results from FatCat may not seem like much on paper, when you delve deeper and look at what he overcame to get to that point, it is clear that he dug deep, as he always does. We caught up with Bryan when the final chequered flag had been waved, to discuss a variety of topics.

MX Vice: It was a pretty average day for you, what did you think of it?

Bryan Mackenzie: It was alright,  I don’t normally like this track, but I have been getting used to it as the years go by really. This year I’ve done alright at the MX Nationals and stuff, so I was looking forward to it – I don’t know if I’d call it bad or not. In the first race I came together with Mel on the first lap, and was right at the back, so I used a lot of energy to come back to eighth, which was tough. I was solid in fourth in the second race, but my bike started to have a bit of problems towards the end. We tried to fix it for the last race, but as soon as I went off the start it did the same, and then it got progressively worse.

On the last five laps the mechanics just had ‘save the bike’ on the pit board, which is what I tried to do.  So I couldn’t really move forward in the last one, so rather than go backwards I just wanted to stay where I was. I think I got an eighth or something, so it was disappointing, but at least we finished all of the motos and didn’t DNF. There are a few people that either crashed out or had DNF’s today.

MX Vice: Would you say your more of a hard-pack rider then?

Bryan Mackenzie: Normally, yeah. I’ve been getting back into sand riding recently, but I definitely fare better on hard pack.

MX Vice: So, with that in mind, you’ve got to be looking forward to the last two rounds?

Bryan Mackenzie: Definitely! I think it will suit me a bit more. You know, today wasn’t a bad day, it wasn’t a write off, but it wasn’t great. So I’ll look forward to the hard pack tracks and grip, which is what I like.

MX Vice: What do you think of the new layout here? A lot of riders seem to like it .

Bryan Mackenzie: [It was] much better, compared to what we raced on at the MX Nationals, which was good, but so short. Today it was faster, so you could get more speed up. It was longer too, so it didn’t feel like you were doing a million laps – the changes were really good actually.

MX Vice: It seemed to be a bit deeper today, too?

Bryan Mackenzie: Yeah, it was. It has been getting harder each year, but maybe the rain helped it? The jump faces still got pretty gnarly with holes at the bottom, and some of the turns were a bit hard underneath. But generally, it was in pretty good shape today.

MX Vice: Overall, you have had a few ups and downs this year. Obviously you won a moto at the beginning of the year, but would you have liked a little more?

Bryan Mackenzie: Definitely, the way that I finished last year I would have liked this season to go a little better. You know, I won a lot towards the end of last year. But this year I have been fighting it a little bit, with arm pump and stuff like that. It’s been one of those years, you haven’t seen me get great starts – usually I’m pretty good. This year I’m away in the top ten most times, but that’s pretty average when you’re racing with the calibre of guys that are up there. So, I need better starts. We’re trying, but I guess it doesn’t happen overnight.

MX Vice: Finally, will you be back with the Pendrich Kawasaki guys next year?

Bryan Mackenzie: Yeah, I’m assuming so. I haven’t spoken to anyone else – I presume the boss is still in it. If that’s the case, I hope to keep riding my Kawasaki for these guys. Everyone gets on really well in the team, and being from Scotland as well makes it easier.