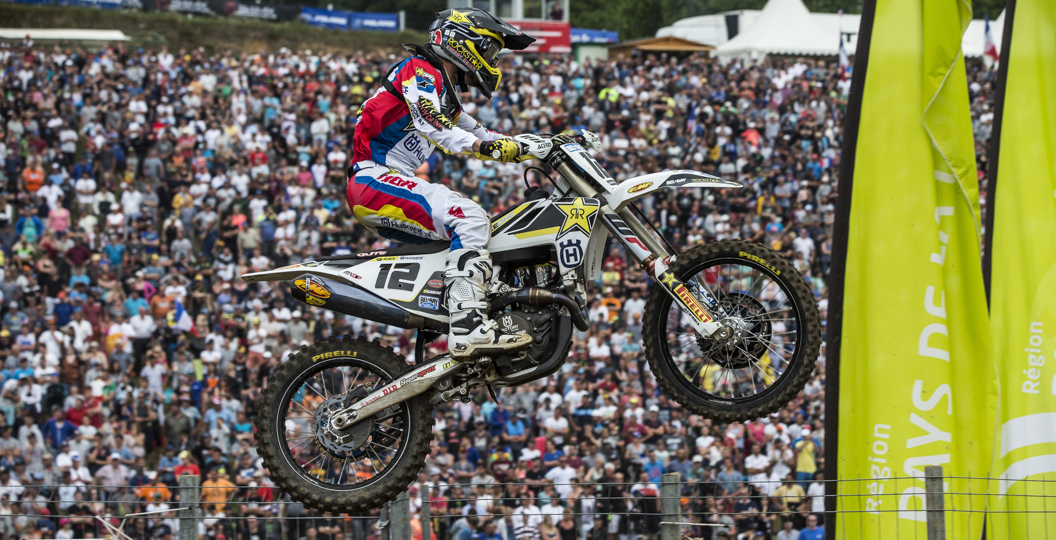 Max Nagl has been an anomaly thus far this year. Nagl – a nine-time winner in the premier MXGP class – has struggled to crack the top five each week, but he finally returned to his winning ways in the first moto on Sunday. What held him back up until that point? We caught up with the Rockstar Energy Husqvarna Factory Racing rider for an exclusive post-race chat in France.

MX Vice: Pushing the results to one side, I think it was just great to see you back riding at your old level. You kind of showed that you have still got it. I’m guessing that you are pretty happy that you kind of rediscovered that again?

Max Nagl: Yeah. Saturday was already pretty okay. The bike was working well! The riding was good. We had a good gate pick for Sunday and then I managed to have the holeshot in the first race, then just led the race in the end almost by twenty seconds. It was a great feeling to be up front again. I was feeling really comfortable again and really happy. I was thinking that I could go for the podium – finally for the first time in 2017 – after that first win. Then in the second race I had a good start again.

Actually, I was around fourth place and I made a couple of mistakes in the first few laps and dropped – I think – to seventh or eighth. I tried to really push hard, but made another big mistake. I had quite a big crash and then lost again positions. Finishing ninth was really disappointing because I couldn’t finish on the podium then.

Is there any particular reason why you kind of turned it up this weekend? Have you made any changes with the bike or yourself recently?

Yeah, both. The last two or three weeks we were training really hard – really tried to step it up. Also on the bike we have done some changes that could help. For sure with the bike set-up we are really good now and we keep it now like it is.

It sounds like maybe starts have been the biggest problem, so is that kind of what you worked on? Is it the bike or is it the metal mesh that has kind of been throwing you off?

No, I think it was that new metal mesh. Somehow it didn’t fit so well to the bike set-up we had and we had to change a lot, but it took time. Now it looks like we found something what really helps on the start.

It is a contract year for you, as you are obviously on a one-year deal. I’m guessing that has only added to the pressure, because obviously it is time to start talking and that’s kind of moving along now.

Of course it gives pressure because – like you say – I’m out of contract. Now I had a good win and already in Kegums on the Saturday I did a good race, but you need better results to get a good contract. Of course that gives some pressure.

I’m guessing that – given the struggles that you’ve had with starts – you are not exactly a fan of the metal mesh and you would kind of like to see it go back to the old way?

Yeah, but there is no question about it because that’s the rules. We need to follow the rules so everybody is the same. We need to make the best out of it.