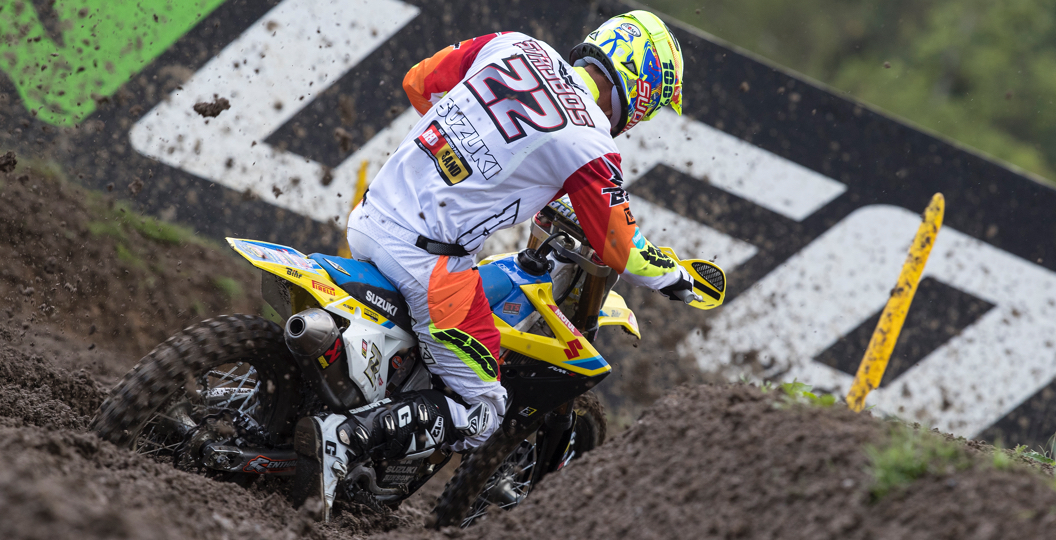 Kevin Strijbos is nearing the end of what has been an illustrious career, which has featured the highest of highs and lowest of lows. Although Strijbos, a seven-time Grand Prix winner in the premier division, has claimed that next year will be his last in the FIM Motocross World Championship, his focus is still on achieving some noteworthy results.

Strijbos has his sights set on some other goals currently though, like acquiring a ride for his swansong. ‘22’ has already been informed by the Suzuki World MXGP outfit that there will not be room for him beneath the awning in the future, as Jeremy Seewer will take his RM-Z450. Arminas Jasikonis will continue with the squad for a second full-time term also. “I am speaking to a few guys and teams,” Strijbos commented exclusively after a recent Grand Prix. “They are not factory teams, which is normal in my position, but if I find a good team where I feel good then I want to go for one more year.

“I want to put everything into it for one more year, try to get a good winter and feel good again,” the likeable Belgian continued. “Hopefully I can find something that suits me, then I’ll do one more year and be done. I am getting old; I am thirty-two now. I think I can still do that though [finish around seventh or eighth]. There have been so many setbacks, but people forget quick. That is normal. It is what it is.”

Strjibos has obviously enjoyed countless successful terms across multiple stints in yellow, as he first burst onto the scene with the squad back in 2003. Suzuki informed him that he had to move on at the end of 2007, before picking back up where he left off with a full-time role in 2013. Ten terms have been spent developing machines with the Japanese manufacturer and that makes him one of the most loyal characters within the paddock. Whilst teams opt to move towards younger riders, who have the potential to blossom into something great, they forgo the valuable knowledge and experience that riders like Strijbos have picked up throughout their careers.

It is quite clear that Strijbos knows his worth though. “I think I am too good for that [riding for one of the privateer outfits within the paddock],” he proclaimed. “I still like to ride, come here to MXGP and train my ass off during the week. I just love the pain of running and cycling – that is what I have done my whole life. Hopefully we can get something good going, with some good bikes and a decent team, then I will be happy that I can train again in the winter. It will be my last year.” Rumours of an early retirement have swept through the paddock like wildfire, but the Belgian went on to boldly state that they are “not true.”

It remains to be seen where Kevin Strijbos will end up next year, as many riders are in a similar situation and jostling for the same seats. Tommy Searle, Jordi Tixier, Evgeny Bobryshev, Benoit Paturel, Valentin Guillod and many others are yet to confirm their home for next year.