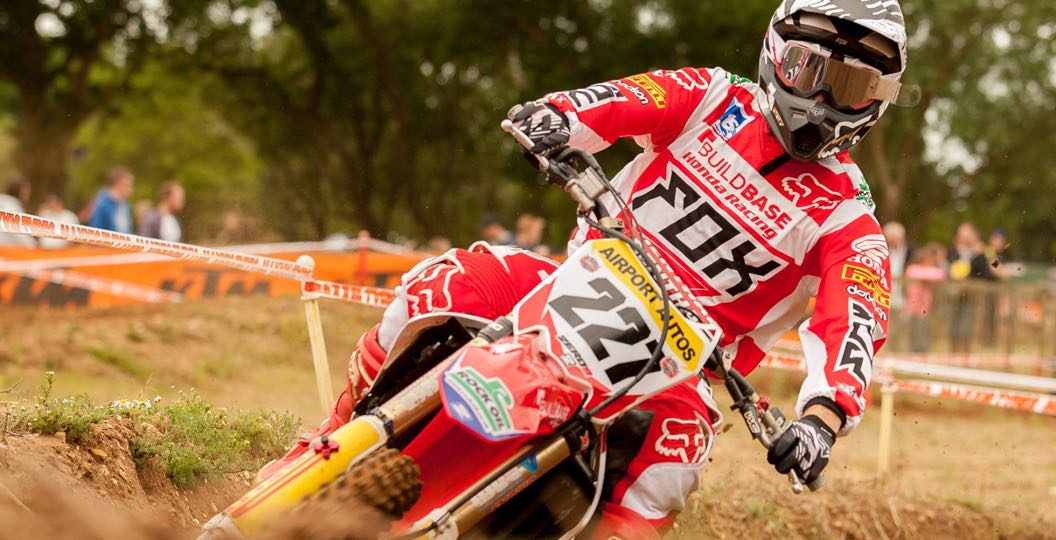 Dave Thorpe is a man who needs no introduction, as he has been successful at many different levels. He was, of course, a world class racer and is now behind the Buildbase Honda team at domestic level. The Honda UK outfit is undergoing some big changes this off-season, as they have signed three new riders, will be returning to the Monster Energy Arenacross Tour and be aided by the knowledge of a new trainer. With so much going on, it is the perfect time to get the lowdown from the man himself.

MX Vice: Shall we start with your thoughts on the 2015 season? What did you make of it all in the end?

Dave Thorpe: If you look at it in black and white, Kristian [Whatley] entered three championships and won two of them. Most teams would take that, but the one we all strive to win is the Maxxis. Kristian worked pretty well in the winter, but then hurt himself through no fault of his own. It was just a testing crash. Unfortunately when he had that collarbone plated, which should have been a quick fix, he got an infection. It complicated it, so he had to have another operation – that kept him out of the Maxxis for two rounds. It’s highly competitive, as we know, so you can’t really afford to drop any rounds at all.

The lucky part of his accident was that he only missed one MX Nationals round and didn’t miss any of the Pirelli [British Masters], so he was still on course for those two. We were reasonably happy as a team.

What attracted you to Irwin and Trickett over Krestinov, who had a pretty solid season, when you started making 2016 plans?

Well, initially, I was going to have one rider in MX1 and another in MX2. That was always the plan, based on what Honda wanted. We had, and have, a very good relationship with Gert. We were very open and honest with him from the moment I had that first meeting with Honda about 2016, and told him we would only be having one MX1 rider. I managed to talk to Phoenix Tools, Barry Moore, and get them back in the Honda family. In that conversation we spoke about Gert and then the deal was done. The most important thing for me is that Krestinov is still on a Honda.

Shortly after that things changed on my side. We managed to find a little more finance, hence why we were able to take on Graeme. There was a small test with him, and he really liked the bike, then over the course of the next few weeks we managed to sort something out that suited us both.

You have two MX1 riders, with Kristian and Graeme, who have a lot of speed and potential. I guess you’re hoping to achieve great things with them both?

Yeah, I think you have hit the nail on the head; they both have a tremendous turn of pace. With the greatest respect to Gert, he is a methodical top five rider consistently. I don’t think he has the raw speed of Kristian or Graeme though. We know that, between the two of them, we have the pace to run with Shaun and Tommy. So, yeah, you’re exactly right we have got a lot of pace.

What about returning to MX2? How did that decision come about and did you want to do it initially?

Honda approached us in the summer with the view of doing one MX2 rider. Our brief initially was to put a podium rider there, someone who could podium occasionally. We looked at Lewis, his form, what he has done and where he has come from. If you look at his season this year, he had his fair share of mechanical problems. We saw him as a young, aspiring rider and we had a limited budget, so he fit the part.

Trickett is obviously great friends with Whatley too, so did that factor in at all? Were you trying to create a happy environment?

No, not at all, that was never a part of it. They are great friends, but it didn’t factor in at all really.

It looks like you’ll have Martin Barr alongside Lewis in MX2 too, which is a bit of a surprise, so what happened there?

We made Martin an offer in August, but he decided to stay with his current team. We drew a line through that. About four weeks ago he contacted Honda and said his deal with his current team had fallen through, so could we do anything? Honda came back to us, so between us we decided to piece a last minute deal together for Martin. He came and tested the bike, which he loved, then the rest of it was quite an easy sort really. Ultimately in August I did make him an offer, which in hindsight would have been easier for him to accept.

Was the original offer for MX2 as well then? What are your thoughts on him dropping back to the 250F?

Yeah, it was. When you’re a British championship team and don’t do the MXGP series, it isn’t easy to attract a rider of the highest level. The reality is we’re not really on the radar of GP riders who have GP aspirations. Martin is one of the people who can ride both classes very well and between the youngster, Lewis, and the more experienced Martin we’re hoping for great results.

You touched on GPs briefly there. A lot of people have said that Whatley really needs to get in that series. Do you agree?

I think Kristian should have gone Grand Prix racing two or three years ago. I think he has the speed and the pace to be very competitive in the right environment. The bottom line is Kristian is a professional racer and, for someone to give him a chance to do MXGP, it would be a free ride or one that he has to pay for. Kristian doesn’t have that financial input around him, so he does what he does best. He earns a very good living and strong money when he does well in England.

Kristian has got his feet firmly on the ground; he hasn’t been gifted rides and money in the past. He doesn’t live the dream – he lives the reality. He is a fantastic rider who can earn good money in Britain. I wouldn’t disagree with anyone who says Kristian Whatley could do well in Grand Prix though.

Have you ever thought about doing some of the GPs as a team, like the closer ones in France or Belgium?

Yeah, we have talked about it. It is difficult for us, because we are heavily involved with Honda UK as a company. We are only a small company, with a brilliant group of mechanics and technicians. We multitask in our company – we are not just a race team. We run our company as a business and you can’t do everything. There’s no point in laying yourself too thin, because you’ll never achieve what you want. There is a chance we might do the odd GP, but that isn’t why we go racing.

A big change for the team is that Alan Milway has come on as a trainer. Was it you who pushed for that? How important is it for you to have the whole team together through the week?

Oh, one hundred percent. We know by looking at Kristian from this year that his pace has been really good, but his distance has been left wanting. At the end of the season when we talked about what was good and indifferent this season, one of the highlights was that actually he is lazy. He relies so much on his natural given talent. We decided to put something in place where he could work with someone who is there for him twenty-four seven, could make a programme and have it regularly checked.

Like so many athletes, they need reassurance in many areas. Kristian very rarely needs assurance in his riding, because he is very articulate on a bike, but he can be left with doubts in his mind about what sort of condition he is in.

I got to know Alan through Jack Bintcliffe, and we talked about bringing the whole team together. I don’t have quite the same worries with Graeme, because he is actually a workaholic on the fitness side. His commitment to that part of his racing is really strong. We’ve worked with Alan for a month now and everything is starting to take place, so I’m really pleased.

Will Martin jump into this programme now then, or will he do his own thing?

Martin will probably do his own thing, just because he has come on board late. I know that he has his own personal trainer in Ireland. Like Graeme, I don’t have the same worries with Martin. He has been around a long time, knows what he is doing and his focus is in the right place.

What are your thoughts on the state of the Maxxis British Championship nowadays? Are you pleased with how things are run?

Looking ahead we have the two-race format and slightly longer races, which will be better. It will put an emphasis on the fitness side and probably assist the GP riders a little bit more. Overall I think it’s a pretty good package. I know the ACU are working very hard to make the new season better than ever, so I guess we won’t really know the new changes and promotions their planning until we get closer to the season. I see a small group at the ACU that do try really hard to put on a good show. Whether in the future we need to consider an outside promoter to really get behind it, only time will tell. For now it’s a pretty good series.

Finally, the team will be gunning for the Monster Energy Arenacross Tour title as well this year. Why have you decided to return to indoor racing?

In September we did a new two-year deal with Buildbase. Buildbase is a building company that has many different types of customers, and arenacross allows us to reach people who wouldn’t normally go to a motocross race. We managed to do a deal with Adam Chatfield and Angelo Pellegrini too, which allows us to have two quality riders. It just gives another aspect to what we do for Honda, Buildbase and our other sponsors. It’s quite challenging for us though, because the main team is off to Sardinia in January. We pulled in some people who we know well though – they’ll be helping out.