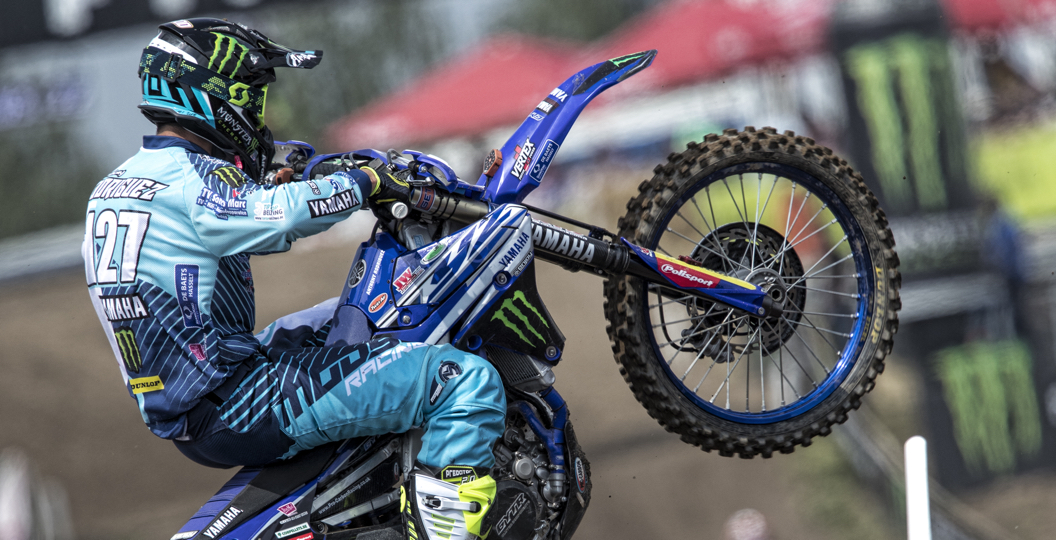 Anthony Rodriguez was eager to find a deal in the FIM Motocross World Championship, following his fill-in stint with HRC twelve months ago, but returned to the USA empty handed. However, now he has a better chance to prove his worth to those in Europe as he will be beneath the Kemea Yamaha awning for most, if not all, of the remaining rounds. Rodriguez did not exactly set the world on fire in his debut with the team, but there are many positives to take away from Teutschenthal.

Anthony Rodriguez: Yeah, one hundred percent. I went back to the USA after Agueda last year; I tried racing one outdoor and I broke my arm. So it was, I think, two months off and ever since I have been riding supercross. I have not touched an outdoor track in so long. It is over a year for sure, so changing bikes and new everything. From head to toe, new everything; new colours, new bike and new sport almost. I am not happy with the results, but I am happy with my performance.

I gave it one hundred percent every time I was out there. Each time I went out there I got better. It shows in the papers. Like I said, it is not the results I want, but I cannot ask for much more. I have ridden three times on outdoor tracks since Agueda basically. I am still riding Seva’s suspension and stuff. Everything was such a last-second thing, so a lot of things can get better. I am super happy with the bike. I love the power. The team is amazing. I am really thankful for this opportunity. I just cannot wait to improve and try to be better each time I get out to the track.

You flew in on Sunday, right? What has happened since then? What has the week been like for you?

Yeah. It is hard to remember honestly, because I have had no time to think. I received the call after Vegas. After Vegas, I did not know what I was going to do. I had no contract, no bike to practice, no nothing. Then on Tuesday they gave me this call and this opportunity. I basically bought a plane and got everything without seeing a contract first. It was like blind. Whatever comes I am taking it. Obviously I flew here not knowing what to expect, then the team welcomed me and it was amazing the way they welcomed me.

We were lucky enough to get three days of riding in. Different tracks for sure. One of them was like a turn track with a few jumps, but it was good to just get on the bike. Like I said, I had not ridden motocross since Agueda basically. I stayed in a hotel and [did not have] much time for thinking. I still have no European cell phone, so I talk to my parents and family and friends just when I get to the hotel. It is pretty difficult.

What about adaption to the Yamaha over the Honda? Obviously you were on a KTM in supercross, so you are going from an Austrian to a Japanese bike. I am guessing that has made it more difficult than last year?

It is quite similar than switching to Honda, because you ride a bike and you get so used to it that anything else is a different world. But with the Yamaha I have to say it was fifteen percent easier than the Honda, just because I rode it basically my whole life. I believe I was Factory Yamaha in Venezuela when I was really young, maybe 2007, and when I moved to America it was all Yamaha all the way up to 2015. One year off to Kawi, then one year back in Yamaha and then that is when I switched to Honda. Now KTM back to Yamaha. Going back to the Yamaha was the easiest for sure. Even though it is a different frame than the last one I rode, it is quite similar.

From what you said before, it sounded like the team contacted you. If you did not push this, I guess that is really positive because that means teams over here are now considering you for opportunities like this. That means you did something right the last time…

Basically I had somebody behind me. He was like an angel basically. He was working for this without me knowing. He did not want to tell me or anything like this until it was official. He did the work for me. I am really thankful for that. I do not know what I would be doing right now if it was not for this. I would probably be mowing grass in the US or something like this honestly, so I have got to thank him. He was the one that started all of this.

Basically in the paper it says just what you said, so I have no idea. I feel bad for the guy, obviously, so hopefully he can be back as soon as possible. I have done both of my ACL’s before. I know how devastating it is, so I truly do feel bad for him. I do not know what kind of surgery he is doing. There are three different ways of fixing it with the patella tendon, hamstring or holograph. So, depending on the options he takes, I do not know how long it is going to take. I do not know how long my stay here is going to be. If he does not come back for the rest of the season, then it is for the rest of the season.

Is an opportunity like this a gamble for you? Can you make money from being a fill-in rider in Europe like this or is this literally a roll of the dice and hope that maybe next year you will pick up a paid ride?

It is like you said, a roll of the dice. It is hard to explain. It is almost like an investment. You come here and you try to show your potential. I like this opportunity for sure better than the Honda [one], because it is longer. When I was with Honda I had literally like six days of riding between the two weeks that I raced. It was like two days before Ottobiano and three before Portugal and I really could not show my full potential.

So with this one I got a better chance and I am going to take advantage of it and hopefully fight and show the 450 teams that I can do something with the right preparation. Unfortunately, I do not have another 250 year because of my age, unless I go back to America, so basically the plan right now is just impress, stay healthy and give it my one hundred percent.

Are you on the full Kemea program, like Ben Watson? Are you working with Jacky Vimond and all of that?

Yeah, this is the other plus of it. This is something that I believe can take my riding to the next level at the moment. To be quite honest, the last three years I have not had a full preparation for the beginning of the season. They have been very late contracts. Maybe one month of preparation before the supercross. With this I feel like the whole programme, training with Jacky and Ben, it is going to help me to get to my one hundred percent and see where my full potential can actually be.