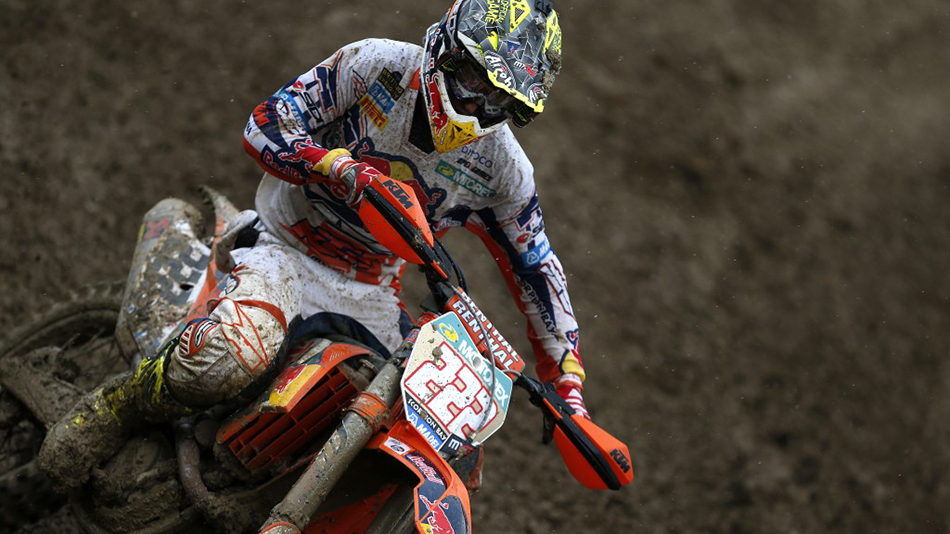 Cairoli and Herlings top the podium at Sevlievo

Red Bull KTM’s Antonio Cairoli and Jeffery Herlings made it an orange day at the mud soaked track at Sevlievo, Bulgaria on Sunday sealing both the MXGP and MX2 GP for the factory team.

Tony Cairoli of Italy now has a substantial 28-point lead in the 2014 championship. Jeffrey Herlings, who missed the Brazil GP through injury picked up two impressive race wins for his top step narrows the gap to MX2 championship leader Arnaud Tonus to just four points.

MXGP
Tony Cairoli was in sparkling form on the KTM 350 SX-F, picking up the holeshot in the opening MXGP moto. He relinquished the lead to Gautier Paulin 21 minutes into the race and was content to sit behind him in second place. While the rain stayed away at least for this race, ruts in the technically and physically demanding track got deeper and more difficult as it progressed.

The weather turned on riders as they lined up for the second MXGP moto but Cairoli, shot out of the gates to grab the holeshot and hung onto the lead throughout. This was a perfect tactic to stay out of the worst of the mud chaos behind as track conditions got worse. He was in front by eleven seconds going into the final laps, enough to preserve his lead when he did make a couple of errors in the deep and muddy ruts in the closing stages.

Cairoli: “I was happy to win in Bulgaria, the last time here was 2007, and I’m happy to gain some good points after we lost a few in Trentino. That’s good for the championship. The track was very slippery in the second moto and we had to find different lines. The two motos were in completely different conditions and we don’t often see that in a GP.”

MX2
Jeffrey Herlings was second on the grid for the opening MX2 moto but it was teammate Jordi Tixier who rocketed out of the gates, took the holeshot and quickly distanced himself from the rest of the field. And while Tixier was in charge in the first half of the race, Herlings sat around 4-5 among a group of riders who have been his biggest challengers this season.

Swiss rider Tonus caught Tixier with eleven minutes left of race time race. On his KTM 250 SX-F Herlings moved up to third, made the pass on Tixier and set out to close down on Tonus.  Then Tonus crashed after a mistake a right-hander in the closing stages and handed the win to Herlings.

There was no double about Herlings’ intentions as he quickly moved into the lead in lap three of his second moto. The Dutch teenager was challenged by Tonus throughout the race but he was unmoved and went on to seal his double race win.

Herlings: “I am trying to fight back after my injury problems and now we have won four of four GPs this year and we’re only four points away from the leader so I try to keep on charging. I struggled with arm pump in the first moto but it was okay after that. The track today was difficult for me. I’m not used to these conditions and especially with the rain but we showed that even on a bad day we can still win.”

Sevlievo was a confidence-boosting outing for Tixier, who finished with a 3-3 result for overall third, even though he was hampered by a slight hand injury. Tixier said he had had a long talk with team manager Stefan Everts and technical director Dirk Gruebel on Saturday night and they decided to change something on the bike.

“It was working pretty good today”, Tixier said. “I had two good starts and I had a good rhythm all the time. The second moto was difficult for me because I had to throw away my goggles after 3-4 laps because there was water inside them. It wasn’t easy to come back on Ferrandis but I found a good line to pass him for third.”

Herlings and Cairoli, who both enjoy riding in the sand are looking for another good result in Valkenswaad, Netherlands on May 4. Herlings will be racing in front of his partisan home crowd on a track that he knows intimately and on which he has never been beaten.

EMX 125/250/300
In EMX125, KTM rider Davy Pootjes of the Netherlands finished with a 1-3 result for his second GP victory to retain the red plate as championship leader. He came back strong after a crash in race one on Saturday but said he was stiff and sore ahead of Sunday’s second race. “But I took the holeshot and after about three laps I felt good again and even though I had a crash I came back from seventh to third which was good enough for the overall win.”

The opening round of the EMX250 class saw British KTM riders Ben Watson and Steven Clarke pick up 2-3. Watson finished with equal points to GP winner Jorge Zaragoza but came away with the red plate for having picked up a race win.

It was also the opening round of the EMX300 class, won by Italian rider Samuele Bernardini but KTM riders picked up the places 2-5 through Italian Marc Maddii, Toms Macuks of Latvia and Hungarian duo Bence Szvoboda and Mark Szoke.