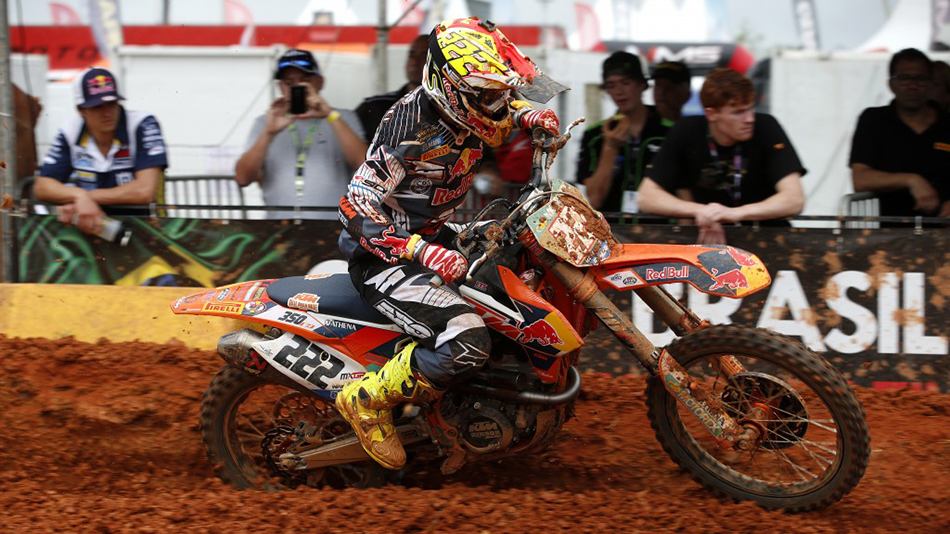 Red Bull KTM Factory Racing’s Antonio Cairoli of Italy was at his golden best on Sunday at the MXGP of Brazil taking a decisive 1-1 victory to surge ahead 30 points in the championship after just three rounds. It was the Italian’s sixty- fifth career GP victory.

MXGP Race 1
Tony Cairoli, a seven times world champion opened his account in the first moto with a stunning display of riding on hisKTM 350 SX-F that thrilled the 20,000 Brazilian fans.

After getting hemmed in at the start he moved from sixteenth up to sixth in the opening lap and then settled down to pick off his challengers one by one while at the same time setting a string of personal best lap times. Twelve minutes into the 30-minute plus two laps race he was half a second behind the leader Jeremy van Horebeek. Two minutes later he took the lead and began to distance himself from the rest of the field.

Even the rain that started to fall on the Beto Carrero red clay track failed to undermine the pace of the race leader. Cairoli was in front by almost 16 seconds when he charged across the finish line, setting the stage for a thrilling second moto.

MXGP Race 2
Heavier rain in between the two sessions threw in another difficulty factor, ensuring that the surface became slicker and stickier than in the opening moto. Cairoli was fourth at the start as MXGP riders shot out of the grid for the second time but he quickly moved up a position to sit behind his traditional rivals Gautier Paulin and Clement Desalle. Cairoli settled down in the next laps to put pressure on Desalle while assessing his overtaking options.

Sixteen minutes into the race he made his move into second. One minute later he was in the lead and immediately put down his fastest lap. The Italian went on to wrap up the race in style to pick up maximum points for this outing in South America.

Tony Cairoli: “I like this track a lot and I like being here in Brazil with a lot of cool people cheering. It’s a very technical track and this level of difficulty was increased after the rain we had between the two motos. Also the track this year was ripped way too much but it was the same for everyone. In some ways that was good because it was even more technical. It’s nice to be winning again like we did last year. Now I have 65 GP wins so it was another great result.”

MX2
With Jeffrey Herlings absent while resting an injured shoulder this weekend, the competition was fierce in the MX2 class, however it proved to be an unlucky weekend for Cairoli’s factory teammate Jordi Tixier of France. A series of crashes on the slick red clay track left him with a 12-12 result for an uncharacteristic overall eleventh.

Tixier admitted after the races that he had struggled with the Brazilian circuit right from the opening practice: “I never had a good feeling for the track right through this weekend and I also didn’t have the speed. I crashed three times in each race and twice I finished twelfth so I am really disappointed. In practice I am good but I am not so good in the race so it is something in my head I have to try to sort out.”

MX2 GP winner Arnaud Tonus of Switzerland took the victory and Jeffrey Herlings, who has consistently been the MX2 championship leader over the past two seasons dropped to fourth in the points. But as Brazil is only the third of a long 18-round season, there is plenty of opportunity for KTM’s Dutch rider to make up lost ground in his quest for a third world title.

In other news from the Red Bull KTM factory team, Cairoli’s MXGP partner Ken de Dycker, who has been recovering from an off season injury, suffered another slight setback this week when he sustained a small injury to his left ankle as the result of an accident at home. De Dycker has been told by his doctors that it should be healed in about ten days.