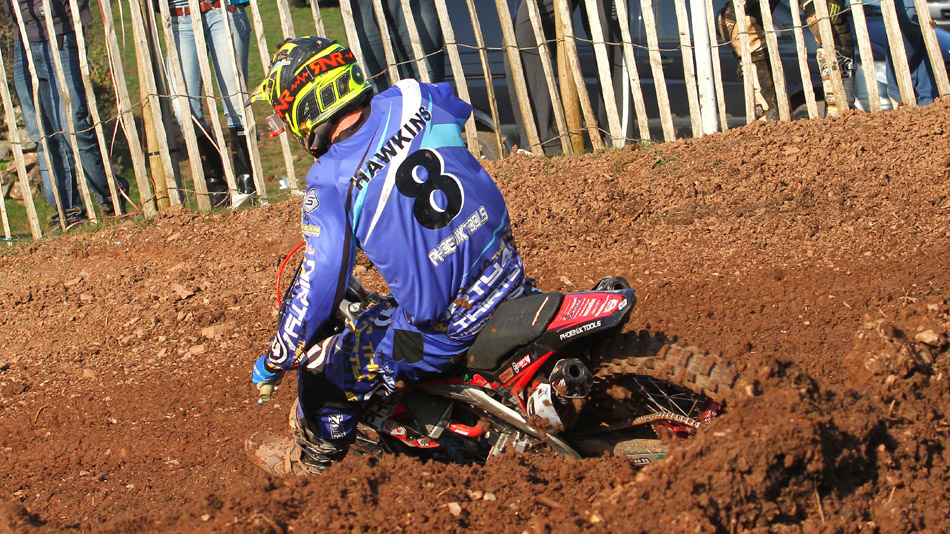 Bumper Crowd for Phoenix Tools Round One

Last Sunday the opening round of the 2014 Phoenix Tools Premier Motocross Championships took place at Phoenix Moto Parc, Kingsteignton on what could only be described as a glorious day with the sun out in all its glory and with a well prepared track after the wet weather of late spectators were there in numbers to witness a brilliant opening round.

In the Phoenix Tools Expert Open class there was one of the best line ups seen and expectations were high. Defending Champion Luke Hawkins onboard the Phoenix Tools Rocket Honda had set the fastest time in qualifying, but it was one of his team mates Kelvin Townsend who was to get the best start in the opening race, but this was short lived as within half a lap Alex Snow had powered his Phoenix Tools Rocket Honda to the front to take the lead. Hawkins was to move up in to 2nd on lap 2 and was giving chase while there was a real battle going on behind him for 3rd between Townsend and John May on the St Blazey Suzuki who was breathing all over the back wheel of Townsends Honda. This tussle went on for several laps and soon to join in the scrap was the Crescent Racing KTM of Jake Shipton and wildcard Lewis Gregory on the GL12 Racing Yamaha. Shipton tried a bit too hard on lap 7 and went down and through went Gregory passing both May and Townsend on the same lap. Snow was to go on to take the win with Hawkins a comfortable 2nd with Gregory taking 3rd. In the second moto again it was Townsend with a blistering start, but right behind him was team mates Hawkins and Snow who were looking to get pass early on, but Townsend was to hold the racing line until lap 4 when a slight mistake saw Hawkins and Snow sneak through and these two just as they did in the opening race started to ease away. Townsend was soon under pressure from young 16 year old Josh Gilbert on the Amped / St Blazey Honda, but a mistake from Gilbert saw him drop back and it was now the H M Plant KTM of James Dunn who had stormed his way up through the field who was to get the better of Townsend and was giving his all, but in the end it was a win for Hawkins from Snow with Dunn a commendable 3rd. The last moto it was Snow who looked to of had the best start, but he ran a bit wide at the first corner and through into the lead was to come Dunn who was soon into his rhythm and was powering away at the front. Snow was giving his all to stay with Dunn, but a mistake and then a problem with the bike on lap 4 saw Dunn ease away at the front. Shipton was now in 2nd trying his upmost to close on Dunn, but there was only going to be one winner in this one and that was Dunn, Shipton 2nd with the Oakleaf Kawasaki of Shane Carless taking 3rd.

In the Over 35 Championship class there were several new names on the line including Nick Life who this year had registered to compete in all the series. In the opening race it was Jamie Deadman who set the early pace and led for the first 3 laps, but was soon under pressure from Life who after not the best of starts had forced his way up through the field and on lap 5 got pass Deadman and from there life stormed away to take the win. In race 2 it was Martyn Tucker with the best start in this one with race 1 winner Life again with a terrible start well down the field. Tucker held the lead for the first 4 laps before he was caught and passed by last years runner up Gavin Flagg and then was demoted to 3rd after Life was to get pass. Flagg was giving his all at the front trying to hold off Life, but it wasn’t long before he found himself back in 2nd as Life took over and from there went on to notch up race win number two. In the last race it was Tucker again with the early lead, but with a better start in this one it wasn’t long before Life took over at the front and was to go on to lay down the gauntlet with a convincing hat trick of wins.

The Over 50’s Championship class saw a welcome return to riding for Mark Gleadhill who demonstrated that he has still got what it takes to compete and was to notch up a brilliant hat trick of wins to start his 2014 Championship campaign off with maximum points.

In the Tyremarks Junior Championship class there were many new names in attendance including many schoolboys moving up into the adult ranks so it was a guess to know who was be a threat. In the opening race it was Leon Burt who set the early pace after a blistering start, but as the race commenced he was gradually reeled in by Luke Sturgeon who was soon pressing for the lead. These two were to swop places several times mid race before Sturgeon took control and was to take the win. Sturgeon was to waste no time in the second race once he hit the front and he was to do exactly the same in the last race, hitting the front early on to race a was to complete a hat trick of wins and lead the Championship after the opening round.