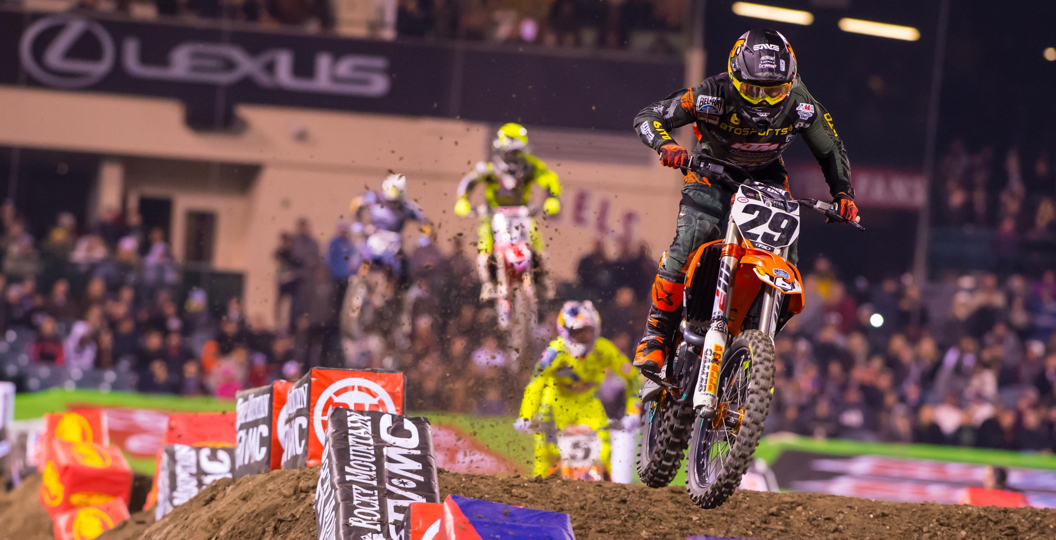 Camarillo, CA (Jan.4, 2015) – Team BTO Sports riders Andrew Short and Justin Brayton started off the season at the front, as the opening round of the 2015 Monster Energy Supercross Series visited Angels Stadium in Anaheim, CA in front of a sold out house of 45,000 fans.

Andrew Short looked confident during afternoon practice, as he posted the 14th fastest time of the day. He took that confidence to the gate and used the traction from his Pirelli Scorpion MX tires to earn the holeshot in his heat race. Short would take a commanding lead, holding off Ken Roczen to take the first heat race win of the season. In the main event, Short once again would use the power of his KTM Factory Services motor to run up front. He would battle strong at the front of the pack, running as high as third place. Short finished a solid 5th place by the checkered flag.

“Tonight was amazing” exclaimed Short of his night. “The new bike with the all new suspension suits my style really well and I am looking forward to a great 2015 season.”

Justin Brayton rode strong through afternoon practice as he found the fast line around the track to post the 11th fastest time of the day. Brayton would make his way in to the main event through the semi, where he would use the power of his FMF Racing 4.1RCT Exhaust to run up front and finish 2nd. In the Main event, Brayton would once again get a great jump off the gate and raced strong to finish 13th at the checkered flag.

“It’s a tough way to start the season” said Brayton. “We will put in the work during the week and be ready next weekend in Phoenix.”