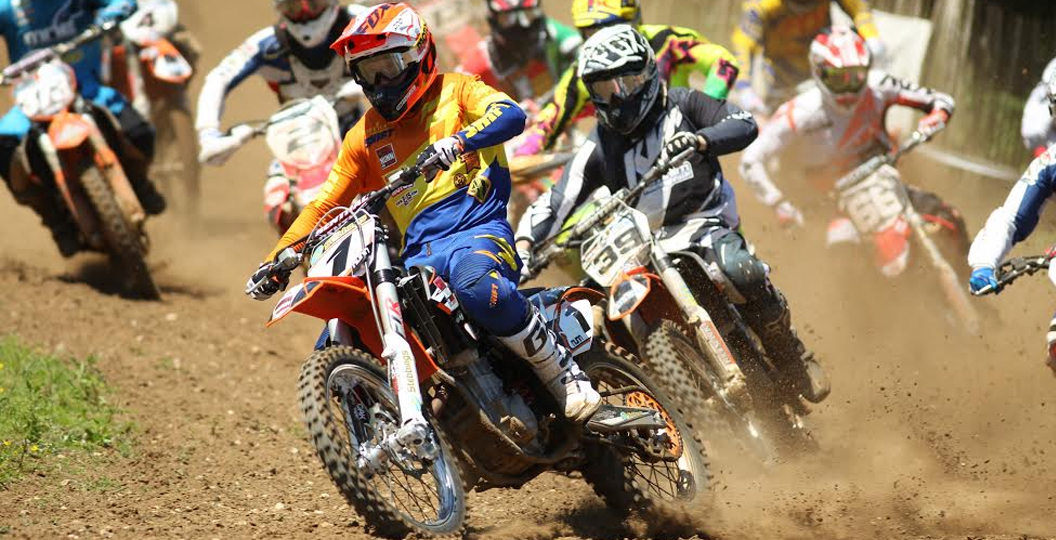 Blaxhall near Woodbridge played host to the fifth round of the ACU Eastern Centre Motocross Championship on Sunday 8th June. The sandy circuit had managed to avoid the heavy rain shower over the weekend and was blessed with sunshine and temperatures in the mid 20’s.

After avoiding the rain on the Saturday the club’s track staff worked tirelessly into the night to ensure that the track was watered and prepared to excellent conditions ready for the following mornings racing. With a bumper line up of nearly 200 riders across the five classes it was sure to be an action packed days racing, with an Expert line up including a number of British Championship riders from around the country.

Sunday morning saw clear blue skies during the morning practice and qualifying session to determine starting positions and groups for the Junior and Expert classes. As the temperature increased the action on track got closer and more intense.

In the Expert Championship class, British Championship regulars Neville Bradshaw, Lewis Tombs, Luke Norris, Mitchell Lewis and Scotland’s Tony Craig all arrived at the Suffolk venue to gain some extra track experience ahead of next year’s national event. With a strong line-up of local Experts the class was to be stacked with action all day long.

The first Expert race of the day saw reigning champion and championship leader Carl Nunn get the holeshot ahead of fast starting Shaun Southgate and Syd Bales. As the opening laps went by Lewis Tombs, Neville Bradshaw and Luke Benstead were on the move forward with Tombs taking over the lead. Tombs was looking set to take the race win until a small crash saw him drop to third, allowing Benstead to take the win ahead of a hard charging Bradshaw and Tombs in third, while Carl Nunn and Luke Norris rounded out the top 5.

After the excitement of the first race and the second Expert race saw Carl Nunn make another great start and take the early race lead ahead of Tong Craig and Neville Bradshaw in third, Craig soon found a way passed Nunn, with Bradshaw soon following. The battle at the front saw Bradshaw storm by Craig and take the victory, Benstead moved into third with Aaron Pipon and Carl Nunn rounding out the top 5.

The final Expert race of the day saw Nunn and Southgate once again make the start and battle for the early race lead before Craig took over at the front. As the race progressed Bradshaw and Tombs charged into second and third and hunted down Craig at the front. With just a few laps remaining Bradshaw found a way around Craig and into the lead. Craig hung on for second place ahead of Tombs in third, Carl Nunn in fourth and Luke Benstead in fifth after recovering from an early race crash.

Sunday’s event also saw the Junior Championship class challenging for championship points and with current points leader moving out of the class, the championship lead was wide open and up for the takings. The first Junior race of the day saw James Mills take an early race lead before Sonny Oliver took over the lead and the race win ahead of Mitchell Meadows, John Hinz, Adam Day and Harry Mills.

The second Junior race of the day saw Mitchell Meadows take a stunning start to finish race win ahead of Connor Hughes, Sonny Oliver in second and third. Fourth and fifth places went to John Hinz and Dean Smith.

The final Junior Championship race once again saw Mitchell Meadows take another start to finish race win this time ahead of Adam Day and Dean Smith, with fourth and fifth place going to Sonny Oliver and Shane Lock.

The Junior B group saw three exciting races, with Jacob Chambers taking the first two race wins before a bad result in the last result cost him the overall victory, that honour went to Paul Hubbard after winning the final race. Second overall went to the consistent Neil Jago after getting the better of Jacob Chambers in a tie break. Fourth and fifth overall went to Will Nice and Ryan Harrington Groves.

In the Junior C group Vince Pryke dominate the class taking three race wins out of three and the overall ahead of Andrew Cattermole in second and Dave Whitehead in third. The fourth and fifth overall places went to Glen Porter and Rik Gorrell.

The final class of the day was the Junior D class which was won by John Smith after taking two of the three race wins with second and third overall went to Ben Stanley and Chris Cockett. Fourth and fifth overall went to Michael Bowell and Simon Ball.