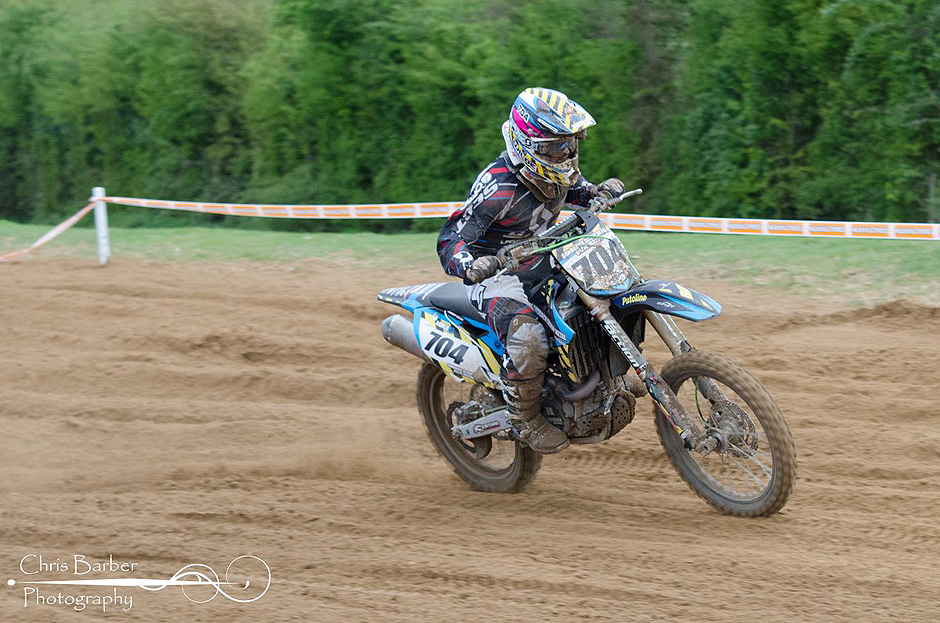 Qualifying: The track was in perfect condition and prepared perfectly. I got straight into the rhythm things and was having fun riding. The track was getting slightly rougher every lap though and it was key to get a lap in early. I managed to get a pretty good lap in on my second quick lap. It could have been better as a few people got in the way but I couldn’t get a better lap in after that and had to settle for 19th which wasn’t too bad a gate pick.

Race 1: I span up really bad on the concrete and didn’t get out of the gate to well and was behind a coming together on the first turn causing me to stall and set off at the back of the pack dead last. Angry with myself I rode well the first few laps and within 4 laps I was inside the top 25 and had the points in my sight. Half way through the race the rain began to come down hard and all the roost I suffered at the start took its toll on my goggles and I had to take them off. Battling on the last half of the race with no goggles I managed to finish a disappointing 21st.

Race 2: Again I span up on the start but I wasn’t in to bad of position into the first turn but I tip toed round the outside and unfortunately a rider fell off right in front of me and my foot managed to get tangled in his spinning back wheel and ripped the boot buckle off my boot. Again I had to put my head down and make some passes early as the track wasn’t the best for passing opportunities. With 2 laps to go I was sitting in 21st again with 3 riders in front of me. I Knew I had the speed to pass them so I went for it on the 2 lap board and managed to pass all 3 in one lap moving up to finish in 18th.

Race 3: This time on the start I packed a little bit of sand under the back wheel instead of going off the concrete. It seemed to work better and I got a mid pack start. The track was again hard to pass but I managed to creep my way into the points again and finish the race in 15th. A better end to the day but still I should of had better results today as my speed was good all day.

Overall : I ended the day 19th overall and also moved unto 19th in the championship after suffering two DNF at the opening round.