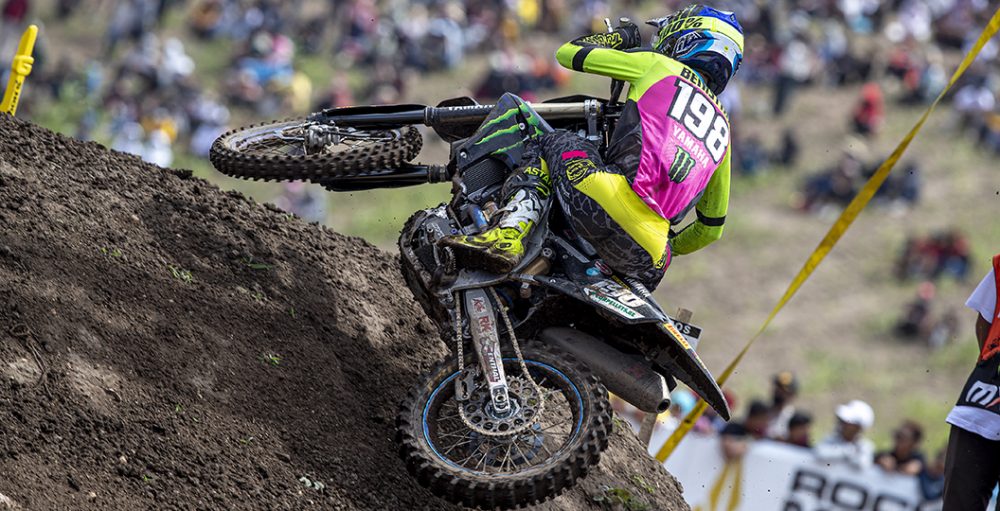 Unquestionably one of the most gifted and aesthetically pleasing riders in the MX2 paddock, it’ll be captivating to see how Thibault Benistant fares in 2023.

On the verge of entering his third season in MX2, the silky smooth Frenchman looms as a legitimate title contender, as he’ll be looking to reign triumphant in his class just like he’s done in EMX125 and EMX250 previously.

Having enjoyed a promising debut MX2 campaign in 2021, a season he came into off the back of breaking his collarbone, there were many occasions where he underlined his skills even though his season was cut short by a nasty ACL knee injury.

Although he admitted his introduction to the premier 250 class was difficult due to him struggling to adapt to the relentless early pace and the time it took to find his rhythm, it wasn’t long before he was flexing his muscles.

Producing a real statement ride in moto one at round three in Maggiora, Benistant bagged the holeshot and never looked back, as the then 18-year-old went on to lead every lap to claim a memorable first victory.

With misfortune seeming to follow him in the next few races, as he was taken out a couple of times, thus hindering his capacity to battle it out at the front as often as he would’ve liked, he didn’t have to wait long for more success, however.

Taking further steps in the right direction at Loket, Benistant not only picked up his first overall podium but also won another moto, as he continued to catch the eye with his exciting style and undeniable speed.

More top five finishes would flow for Benistant, who notably cemented himself as a major threat to the likes of Maxime Renaux, Tom Vialle, Jago Geerts and Mattia Guadagnini at the head of the field on a variety of surfaces.

Suffering a small setback when a rock hit him in the collarbone that he broke in the winter at Latvia, he admirably fought through the pain to keep making tangible progress.

Although a combination of mistakes, crashes, poor starts, bike setup conundrums and incidents beyond his control meant he couldn’t get back on the podium again that season, so many positives could be extracted from his rookie MX2 term that was unfortunately ended two rounds prematurely due to the aforementioned knee ailment.

By the numbers, his two moto wins, one overall podium and five top five overalls was a fine return in a season where he ultimately finished a credible eighth in the standings. 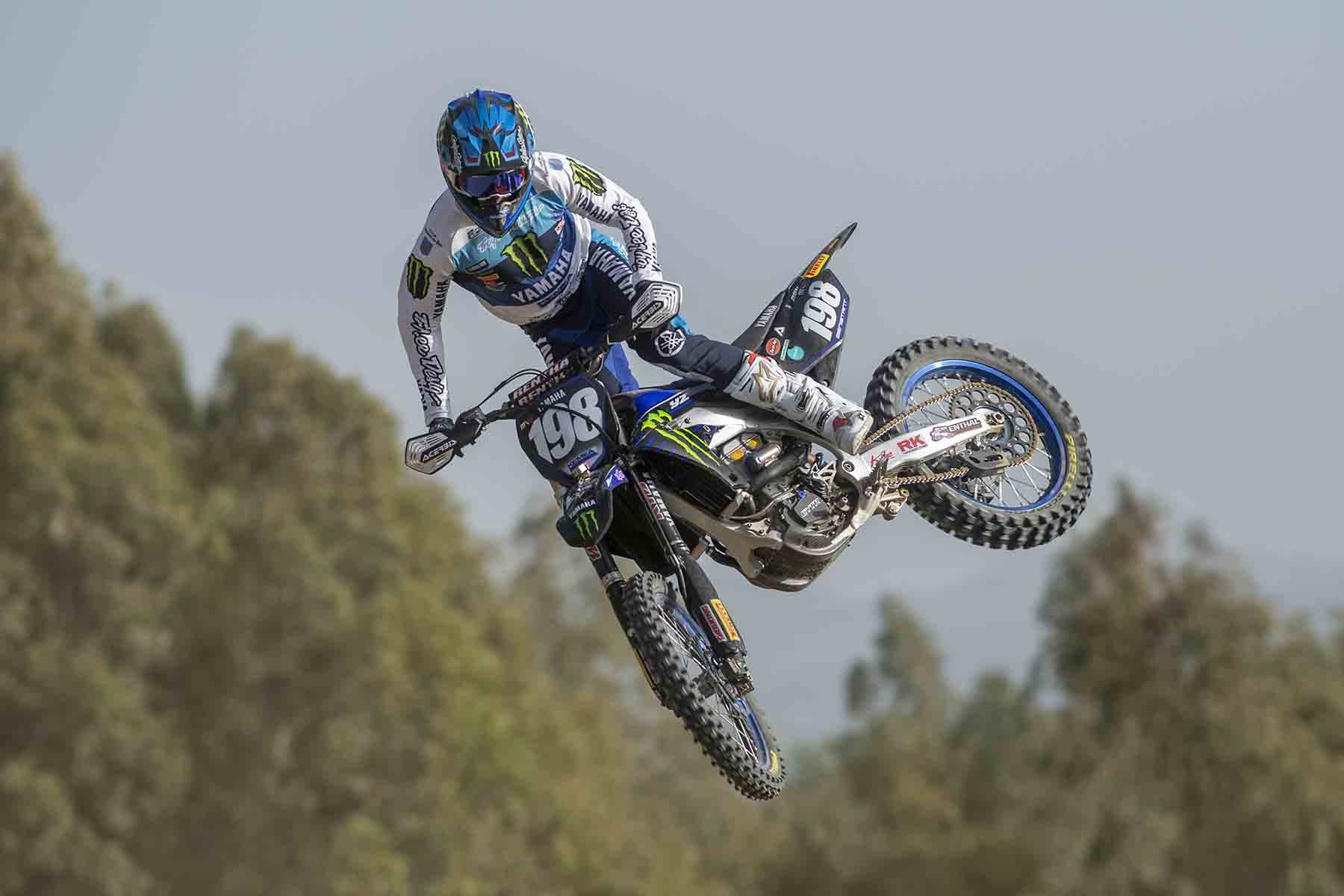 Providing him with a valuable learning experience on what it takes to win, plus giving him a keen insight into how best to set up his bike and handle the gruelling schedule, this certainly held him in good stead for the successful 2022 that followed.

Despite being forced to miss the opening three rounds of the season with his troublesome ACL, once back in the saddle, he immediately went about making up for lost time.

Enjoying a successful return to action at Portugal by going 7-8 for seventh overall and getting through the weekend unscathed, aside from suffering some arm-pump, Benistant left feeling satisfied. “The weekend was difficult in the beginning. I felt quite tired and had to deal with arm-pump. But, over the weekend, it got better and better. I still had some arm-pump, so I had to focus on staying relaxed,” he told Yamaha’s website.

“I got two good starts today, although I was on the outside gate, so it was hard to stay at the front around the first turn, I just focused on finding my rhythm without pushing too hard. In both races my riding was not bad, and I think for a comeback ride, this was not too bad, so I will try to continue on this way and make a come-back step by step.”

Backing this solid day at the office up in Trentino by winning the qualifying race (his first in MX2) in emphatic fashion before claiming 5-3 finishes on raceday for fourth overall, this was another great weekend in his quest to get back to his best.

Oozing confidence and knowing he’s capable of mixing it with the elite operators, another podium followed in Latvia, where he rode with assuredness and composure to keep up his positive momentum.

After enduring a round to forget at Maggiora, where a coming together with friend and compatriot Vialle in the opening race set the tone for a challenging day ahead, Benistant set his sights on getting back on the upward curve that he’d been enjoying. And that’s exactly what he did in the sweltering conditions in Sardegna by registering a pair of thirds, with him recalibrating his focus admirably in the brutal deep sand of Riola Sardo.

On top of obtaining his first overall podium of the season, further upside could be found from his two holeshots and second in the qualifying race. Giving him the boost he needed to really inject some impetus into his 2022 efforts, this served as the catalyst for a terrific run of results.

Getting back on the box at his home GP at Ernee by virtue of his 8-1, his second moto was a joy to behold after engaging in a battle royale with teammate Geerts to eventually prevail at the death.

Things would get even better for the technically superb pilot at Teutschenthal, where he handled the tricky hard-pack conditions masterfully aboard his Monster Energy Yamaha to notch his maiden MX2 victory. Especially sensational was his second moto, where he put on a real clinic. Creative with his line selection, scrubbing flamboyantly and looking in complete control while combining power and finesse phenomenally, there would be no denying the hotshot.

“My first GP win! I am really happy about this. I was riding really good all weekend, even though the first moto I was a little bit tight. I tried to stay with the guys, but they were going really fast, and I was not feeling really comfortable, so I finished P3. I started second again in the second moto and tried to push directly. I managed this and took the victory. I really want to thank all the people in the background who we don’t see, but a lot of people are working with me and believe in me, so thanks to all of them,” recalled a jubilant Benistant.

Serving as the spark to really ignite his year, his milestone display in Germany saw him proceed to pick up podiums in Indonesia, despite not being at his best, and at Loket, where he recorded another outstanding moto triumph, to extend his consecutive podium streak to four.

Although the remaining five rounds mixed the highs with the lows, as he bravely fought through the pain of a shoulder injury he suffered in Sweden and endured some bad luck, his accomplished ride in front of his home fans at St Jean d’Angely was unquestionably a highlight. Motivated and feeling the love of the supporters, who came out in their droves to support the many world class Frenchmen on display, Benistant marked the occasion fittingly.

Ripping the holeshot in the opening race to scorch out to an unassailable lead, the way he managed the race, maintained his concentration and withstood the discomfort showed his immense character and riding aptitude.

While he couldn’t replicate his efforts in the second moto, an impressive second was still a wonderful result, as he was clearly right at home in the conditions and had the pace to match Vialle and Geerts, which was illustrated by the fact he logged the second fastest lap time in both motos.

Recently extending his deal to stay for at least two more years under the exceptional Monster Energy Yamaha awning, there’s every reason to suggest he’ll be a legitimate title challenger in 2023. With the pivotal caveat being, whether or not he can remain fit.

“I have been with Yamaha for a long time, since I was racing on a YZ125, so I am happy to continue with them for at least another two years. I feel good on the factory YZ250FM, and I have a lot of confidence in the team around me, so I’m certain we can be contenders for the World Championship title. Thanks to my team for their support and thanks to Yamaha for believing in me,” gleamed the 20-year-old.

One of the future superstars of the sport and primed for a world title tilt, Benistant, who makes it look so easy and effortless when in full flight, knows what needs to be done to turn his aspirations of becoming champion into a reality.

Set to be fully recovered from off-season shoulder surgery and under no illusions how difficult it will be to come out trumps in this stacked, hugely competitive class, the hard working, ever-maturing and fiercely determined #198 will relish the challenge ahead.

34 races into his career on the world stage and possessing just about all requisite ingredients needed for success, watching to see if he can rise up and fulfil his enormous potential in the fight for supremacy will be compelling.