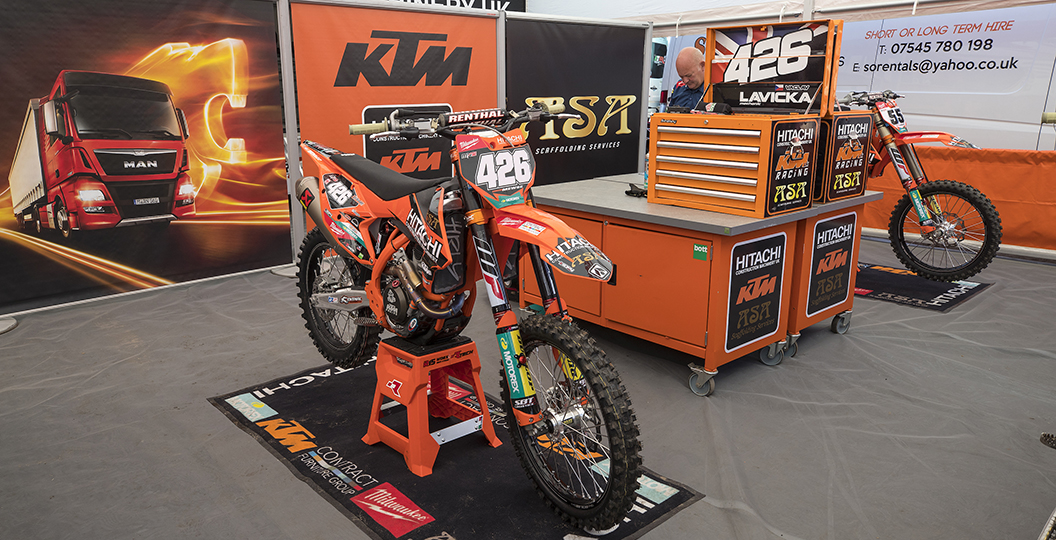 All Injuries: MXGP at Assen

Jago Geerts: Jago Geerts had a vicious crash at the Grand Prix of Switzerland a month ago and sustained a broken collarbone. The Kemea Yamaha pilot is already poised to return to action, however, as he got onto a bike again a week ago and had no pain or discomfort at all. This is obviously great news for Team Belgium.

Graeme Irwin: Graeme Irwin bowed out following the Grand Prix of Switzerland, when a rock damaged his face. The time off also allowed him to recover from a back problem that had hindered him for a few weeks. Irwin currently runs twenty-sixth in the premier-class standings and had a season-best finish of fourteenth at Lommel.

Adam Sterry: Adam Sterry has had an extremely turbulent campaign. An ankle injury forced him to miss a couple of events in May, then he reaggravated that injury prior to the Grand Prix of Switzerland. Sterry has been missing since then, as he has been letting that heal, but will return to the track at Assen this weekend. It is worth noting that he has had an opportunity to ride quite a lot recently.

Brian Bogers: Brian Bogers is set to make his debut with Team HRC at the Dutch Grand Prix this weekend. It is unrealistic to expect an impressive result from the premier-class rookie, who has been sidelined with a foot injury since November last year, but just lining up on a starting line is a step forward. Todd Waters has now moved onto an Assomotor machine.

Alvin Ostlund: Alvin Ostlund crashed in the waves at the Grand Prix of Latvia back in May and consequently sustained a broken ankle, hence why he has not appeared in the FIM Motocross World Championship. The SM Action Yamaha rider will return to racing at the highest level in The Netherlands but got seat time at a round of the Swedish championship last weekend.

Maxime Desprey: Maxime Desprey will make his return to the FIM Motocross World Championship this weekend, after missing the last seven rounds with an ankle injury that was sustained at a domestic event. Desprey was actually quite strong in the sand before his injury, so could potentially be a surprise this weekend.

Milko Potisek: Milko Potisek has been on this list since the third round in March but will finally jump back on track this weekend. Potisek fractured his ankle in two places at the second round in The Netherlands in March, hence why he has been absent. There have been some minor injuries as well. It has basically been a disastrous season.

Conrad Mewse: Conrad Mewse suffered a hand injury at round six of the Maxxis British Championship last month and has been missing from the world stage since then. Mewse will return in The Netherlands, hence why he is listed here, but it remains to be seen how prepared he is. Thirteenth is the spot that he occupies in the points.


Romain Febvre: Romain Febvre had a significant concussion at the Grand Prix of Turkey and is not going to race at the penultimate round. The head injury is not actually a problem, it is the broken rib that he suffered that is giving him the most trouble. There is a lot of pain that he simply cannot push past. It remains to be seen whether he will compete at the final round.

Valentin Guillod: Valentin Guillod was desperate to turn things around in the month of September, after battling against some kind of virus since his return to the FIM Motocross World Championship in May. A fall at the Grand Prix of Turkey left him with a fractured shoulder blade and in an awful position though. Guillod is not present in Assen.

Stephen Rubini: Stephen Rubini was originally poised to return at the Grand Prix of The Netherlands, but is still too beat up from that crash at Sevlievo. It not too much of a problem, as he started riding earlier this week, but he is just going to wait for the final round in Italy to make his return.

Davy Pootjes: Davy Pootjes did not break anything when he crashed at the Grand Prix of Asia, but he sustained muscle and nerve damage in his back and shoulder. This was only confirmed this week and, now that new information has emerged, he has opted out of the rest of the FIM Motocross World Championship in order to heal up.

Max Nagl: Max Nagl returned from the finger injury that he sustained in July at the Grand Prix of Bulgaria, but then required another surgery. An additional operation was successfully performed last week and he is now on the road to recovery, although it is unlikely that he will be on track at Imola. Nagl still believes that he will be fine for the MXoN.

Brian Hsu: Brian Hsu is having a rough go. Hsu was set to return at the Czech Grand Prix, after sustaining an injury in March, but dislocated his shoulder again at a domestic race and will miss the remainder of the season. It is unknown what his future holds, as he has had no noteworthy results for a handful of years now.

Benoit Paturel: Benoit Paturel never gives much away but has confirmed that he has been diagnosed with what sounds like glandular fever. The Frenchman had been attempting to identify the issue since Ottobiano in June and, unsurprisingly, this is going to rule him out of the remainder of the season. There is a chance that his deal for next year will be announced this weekend.

Arminas Jasikonis: Arminas Jasikonis has struggled since he hit the dirt at the French Grand Prix last month, hence why he left Indonesia earlier than planned and then skipped Loket and Lommel. Jasikonis is going to miss the rest of the season now, but the announcement has weirdly not been made yet. There was someone in his camp who confirmed that is the plan though.

Iker Larranaga Olano: Iker Larranaga Olano is on the road to recovery, although he will still be sidelined for quite some time. Larranaga got discharged from a German hospital two weeks after he arrived, as he had a pair of dislocated shoulders, but there is still no specific timeline on his recovery. There appears to be no doubt in his mind that he will come back stronger.

Jorge Zaragoza: Jorge Zaragoza is dealing with two torn menisci, a torn ACL and then a fractured tibia and femur. The severity of the injury was not determined until May and he then had to wait a month for the fractures to heal before he could undergo surgery. Zaragoza has done that now, but still faces a very long road to recovery.

David Herbreteau: David Herbreteau had to end his season prematurely following his home Grand Prix, as he dislocated his shoulder for the third time and had to undergo surgery. Herbreteau will focus on next year when he does eventually return to riding, but the VHR KTM team have informed him that he will not have a deal for that season.

Darian Sanayei: Darian Sanayei was always going to bow out of the season early but did so earlier than planned. The torn ACL that he said sustained in April did not hold up well at all whilst riding, hence why he is recovering from surgery in the United States and focussing on his final term in MX2. Sanayei has signed an extension with Steve Dixon for that year.

Jed Beaton: Jed Beaton was edging towards the front of the field before he had a horrific crash at Matterley Basin in May, which left him with a broken leg and ankle. Beaton is not going to return at all this year, which is not much of a shock, so his attention will turn to next year and what will be an intriguing campaign. It will not be too long before he gets back on a bike.

Vsevolod Brylyakov: Vsevolod Brylyakov has had such a rough time of it in recent years and, unfortunately, suffered another blow at the Grand Prix of Russia at the beginning of May. A torn ACL was sustained in moto two and forced him onto the sidelines for a significant period. Brylyakov must move up to the premier class next year.

Arnaud Tonus: Arnaud Tonus, who has dealt with a handful of knocks and injuries, has had a difficult year. Tonus is still recovering from the dislocated shoulder that was sustained in France in February, almost unbelievably, but is now back on a bike. Tonus has already signed an extension with Wilvo Yamaha MXGP, so is comfortable for next year.