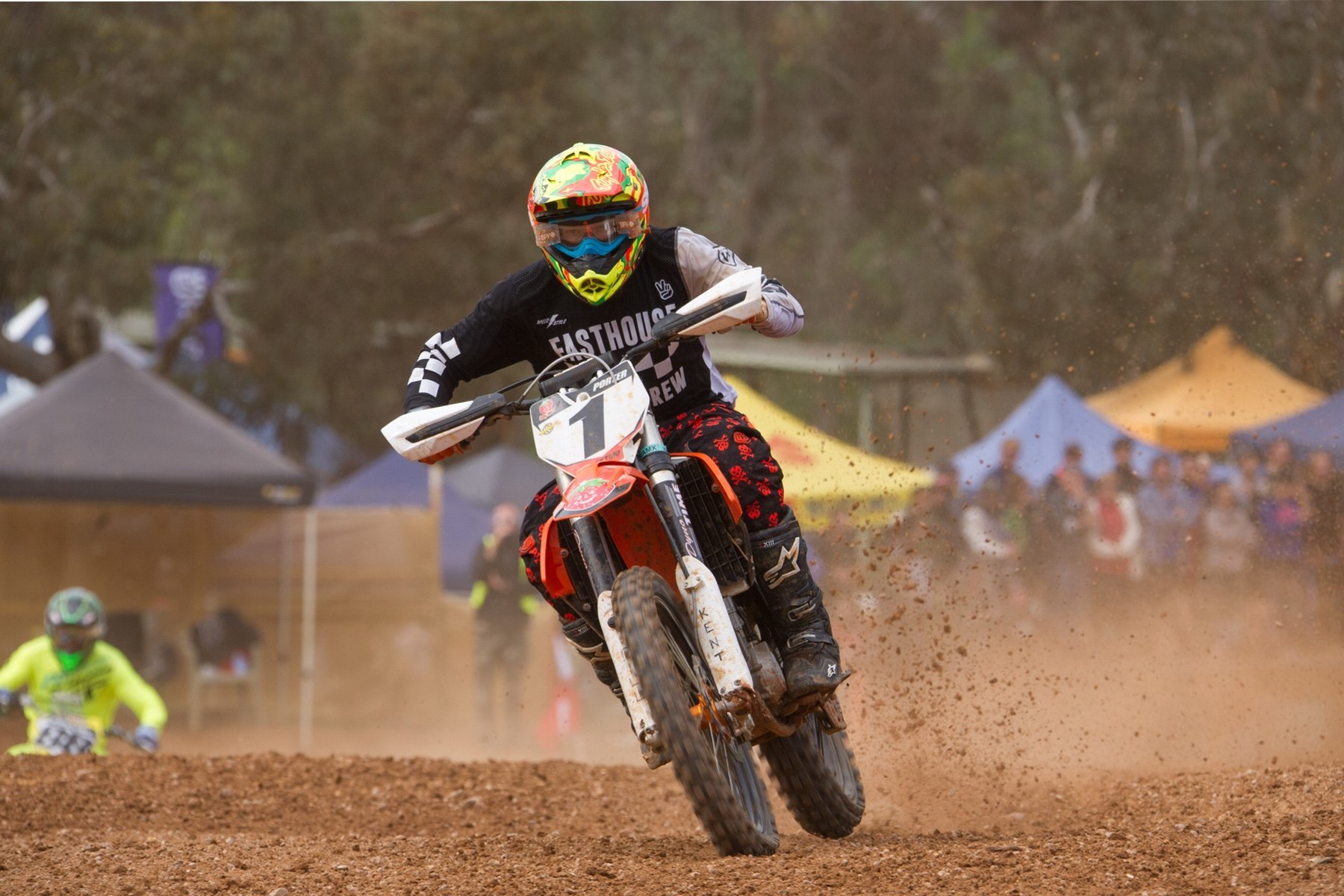 t is by far one of WA’s most picturesque and also most hard-nosed circuit’s riders face on the calendar as the Make Smoking History WAMX Senior State Championship headed to the BSA and Harley Davidson Motorcycle Club’s home track for the second state championship round.

The hardpacked and undulating facility presented various challenges to the competitors with the threat of rain holding off as the day was run under sunny and overcast skies and the 2016 State Championships became very interesting in the points chase.

Only eight competitors lined up in the class with series leader Scott Petricevich (1-1-1) again unstoppable, although challenged by second placed Ben Hothersall (2-2-2). Local rider Brendon Parnham would secure third on the day after battling with Trevor Unstead, as David Robertson, Brett Ylioff, Anthony Fiaschi and Shaun Kelly would fight out for the remaining points for the round.

With two holeshots and three race wins, Luke Gaisford maintained his brilliant best taking the round win (1-1-1). Ashley Mills picked up second in the opening moto and was a threat until the second moto where his day ended after coming off. Luke Ovens was in terrific form in this round (3-2-5) picking up second overall and a massive confidence boost for third placed Luke Capocreco (4-4-3). Michael Murphy was in fighting form racing to the lead in the second moto before the flying Gaisford would leave the field scrambling in his dust as Tyrone Robertson, Bryce Clark, Daniel Longstaff and Michael Bullock would battle in the mid pack mayhem, again ensuring that the four wheeled warriors were a crowd favorite at Round 2.

Jamie Nickless was on the gas securing the round win with a perfect scorecard. Kalgoorlie rider Ricky Ladiszlai would secure second for the day with Southern Cross member Travis Tuck picking up third for the day. Corey Ablett who podiumed at the opening round would fight hard over the day with Cody Hunt and Lilly Kent, who was flying the flags for the ladies with eight girls representing in this class.

Possibly the most exciting racing this season in the MX2, with Luke Davis (2-2-1) dialling in his starts and Josh Adams chasing him down. Adams (1-1-4) was on point to secure the round win until the last moto when he was involved in a first corner crash taking down Carson Bascombe, and Izaac Jones. Adams and Bascombe were able to re-join the race with Adams faultless in coming from position 33 to finish in fourth.

Luke Davis would take the round win by one point, and despite having his starts he believes his lack of bike time has him struggling with fitness: “Picking up the round win is great, but not the way that you want to take the overall with Josh going down. He was on fire the first two motos as usual but this is a cruel sport and consistency is key, so I’m happy with the win”.

Josh Adams would take the second step of the podium and carries the red plate as the series leader.

2011 MX 2 champ David Birch finishing in third. “It’s good to be back on the box, I am pretty happy with how today went. The last moto was probably the best I’ve been in a while , I felt strong on the bike and come in second and that gave me third for the day”.

Defending champion Dylan Heard put the round 1 horroes to bed to bounce back with John Darroch, Jack Perkusich, Aaron Anderson, Russell Scoble and Erhard Pajewski. Izzac Jones was in sensational from until the last moto crash had him taken from the track where a confirmed broken collarbone has the remainder of his season in doubt.

Nathaniel Keen (1-2-1) took the win ahead of Tyrone Ballantyne second and Tim Dunstan coming through to secure third overall for the day. Jason Ovens had his starts timed perfectly with outstanding holeshots and Jay Sumaryo, Mark Rollini, Chris Hallett and Sheldon Gill battling with Mitch Kerr and Ben Stevens for the remaining places.

When Dean Porter rocketed out of the gates in the opening moto his lead was never challenged as he would take the race win from Charlie Creech, Robbo Lovett and Craig Bolton. Robbo Lovett (2-1-1) would repay the favour securing the remaining two motos with Porter’s (1-2-7) scorecard enough to have him picking up second and Charlie Creech racing to third overall for the day.

Robbo Lovett’s results have him retaining the red plate as the series leader by eleven points over Porter, and with the next round heading to the sands of Coastal Park on Sunday July 10th, and only 38 points separating first back to fifth in the championship standings it is a close title fight in the prestigious MX1 Class.