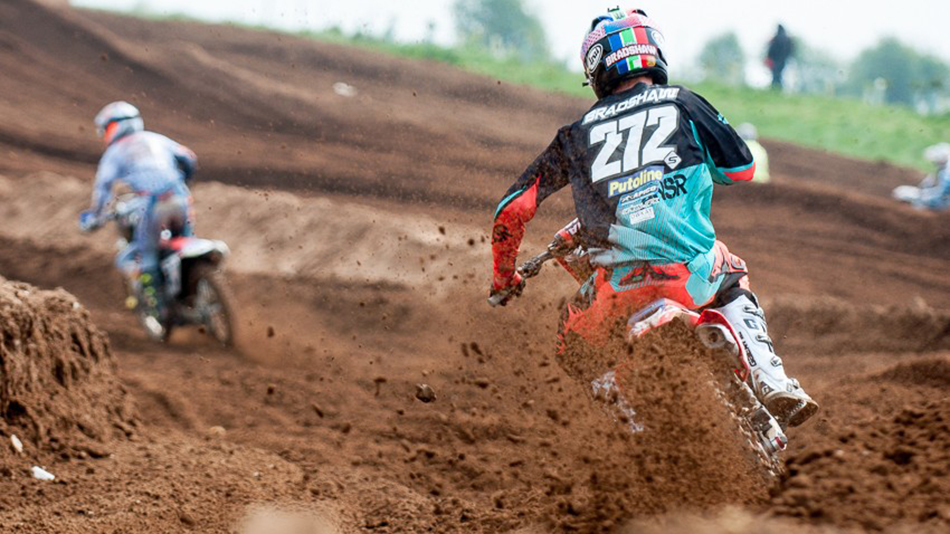 Neville Bradshaw has had a brilliant start to his 2014 season, as he currently leads the MX2 class at the MX Nationals, and he is right in the thick of the title fight in the Maxxis British Championship. We caught up with him at the end of the weekend at FatCat to get his thoughts on a few things.

MX Vice: You have to be happy with second overall, right?

Bradshaw: Yeah, definitely. Sand definitely is not my forte, so this was a track that I really struggled around. I’m pretty happy to come away with a third, a first and a second. The racing with the MX2 guys was epic all day, I’ve never had racing like that before; it was so tight! I think that because it is a practice track, a lot of guys can go quick around here. I lost one point in the championship to Bryan [Mackenzie], so I’ve still got about a twenty-eight point lead. It’s been good all weekend. I was definitely the strongest MX2 rider towards the end of the motos.

MX Vice: You say that sand isn’t your forte, but you have been very strong here, and at Lyng. So, what do you expect when you got on hard-pack?

Bradshaw: Yeah, I know, it’s weird. I’ve been saying to my team that I feel amazing on the bike, and my strengths feels really good. I’ve never felt as good as I do when we go practicing, too. Lyng is a bad track for me normally, and so is this [FatCat]. But, I was on the pace last weekend at Lyng, so I think that we can definitely surprise a few people at Foxhill, and as the season goes on I think that all of the work we put in during the winter will pay dividends again.

I just want to put my head down; this is one of the last opportunities I’m going to have to win a British Championship. I’m twenty-one points out of the lead, and this time last year we were seventy points down. I just need to be sensible, get good starts, keep working hard and just keep it going for the rest of the year really.

MX Vice: We’re two rounds into the MX Nationals now, what do you think about it? What do you like? What don’t you like?

Bradshaw: I think it’s a cool series. They have definitely stepped up and replaced the series that we lost. I like the fact that we get to race on the weekend, and the motos are long, which is good for the fitness and stuff. I’m not a big fan of racing with the 450’s – I don’t think the riders like it, and I don’t think the public get a fair race. If the race yesterday [Saturday] was a straight up MX2 race, it would have been unbelievable. It’s positive though, you know. I’m glad someone stepped up, it gives us somewhere to race and it keeps us busy.

It would be nice if they left the tracks rough in between races. Culham was one of the best races I’ve had in the last five years, with the way that the track was, because they left it rough overnight. It is good for the kids as well, because they need to learn how to ride rough tracks like they that if they aspire to go race in Europe.

MX Vice: As an MX2 rider, do you feel a little under-appreciated in these mixed races? Obviously, the winner of MX2 doesn’t get as much attention.

Bradshaw: Definitely. They see us riding around in like tenth, eleventh and twelfth, which is way down the pack. We’re going fast, you know, we could be one, two, three next week at the British Championship. I think if there is enough riders to separate the classes, a lot more people would come. No one really likes to be roosted all moto – I just got filled in all race. There is a reason why the Japanese make a 450 and a 250. This is the only place in the world where we race them together, so I don’t know. I think a step forward would be two separating the two classes.