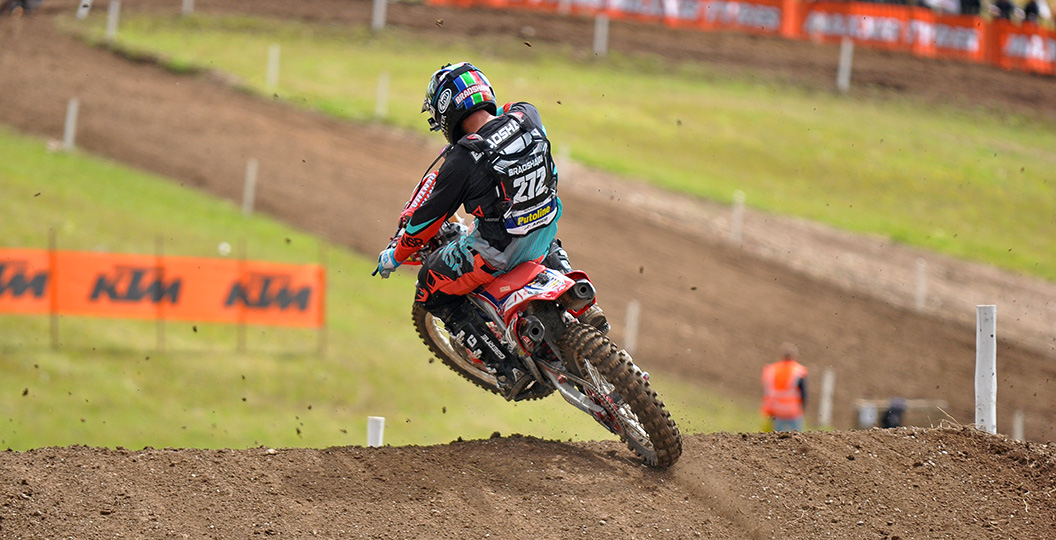 Neville Bradshaw had a difficult day at Cusses Gorse, for a few reasons, which cost him a handful of points in the championship. However, with one round remaining he still has a shot at finishing in the top three. The Putoline Apico Honda rider is also in control of the MX2 class at the MX Nationals also, of course. We caught up with Bradshaw following the seventh Maxxis British Championship round, where he revealed some big news.

MX Vice: It was a pretty so-so day for you. Obviously the bike problem in race one didn’t help, but what did you think of the day?

Neville Bradshaw: It was a tough day. In the first race I was running seventh with two laps to go and then the bike let go, so that was a bummer. I rode as hard as I could in the second race and got into sixth. I was having a good race with Bryan, and we caught up to Watson so our speed and stuff was good, but I ended up sixth so wasn’t so stoked on that. Then in the last race I again didn’t get the best start, but I came through pretty quick to fifth. Again I battled so hard with Bryan and we past Watson. Our speed is good, you know, but fifth place isn’t so great.

I’m pretty bummed on it; I lost third in the championship to Sterry because of that DNF. But we’ll move onto Foxhill and try to have a solid race there to end the year. What can you do, it was a tough day but I gave it one hundred percent in all of my motos and did all I could.

MX Vice: How many points are you down on Sterry? Could you still get third at the last round?

Neville Bradshaw: It is possible; I think it is maybe fourteen or fifteen points. So, it’s a fair amount of points, but anything can happen. Look at me, I had a DNF and I’m still not too far down. Anything can happen at the last round, we’ll just keep our heads down and do what we can between now and then and hopefully have a good weekend.

It would be nice to end my racing career with a top three in the British Championship and the MX Nationals championship. I have just got to put my head down in the next couple of weeks and really focus on coming good in the races. It’s nothing to do with my riding or bike; it’s just my starts and positioning. The top seven, eight, nine guys in the MX2 class are all the same speed, so it just comes down to track position.

MX Vice: Like you said, it seems everyone was the same speed today, especially around here, where it was quite fast. What did you think of the track?

Neville Bradshaw: I like the track – it is a fun one to ride. But, yeah, everyone was the same. You just ride as hard as you can, and they are too, and it’s the same every lap. I enjoyed it, there are a lot worse tracks that we could have gone to and it’s something different. It’s nice to come here to race and Foxhill should be good.

MX Vice: It seems everyone that I have spoken to has said the track is great fun to ride, but it’s not as good for racing. Would you agree with that?

Neville Bradshaw: Oh, yeah. You know, for actual racing and passing it’s really difficult, especially with the MX2 class, where everyone is so similar, and there are only one or two good lines around the track. It’s a fun track to ride, but for racing it’s difficult. The start was really crucial. If you look at the race going on now (the final MX1 moto) it’s just a train and you don’t really see that too often. It is what it is – we just had to crack on with it.

MX Vice: So, you just said that you are done after this year. I know that was the original plan, but is that still happening? You’re not going to be tempted back for one more season?

Neville Bradshaw: I don’t know, I’ve always said that when my best is not good enough then I would pack it in. The last moto at the MX Nationals last week was everything that I had; Bryan and I were riding awesome, but I finished third. Then that last moto today was all that I had, an awesome race and I finished fifth. I don’t want to be riding around in fourth, fifth and sixth, so I’ve got to think about it in the next couple of weeks. But this is definitely my last season as a professional and riding for a team. Whether I do it for a bit of fun next year alongside my training schools is another story, but yeah, this is my last couple of races riding for the team.