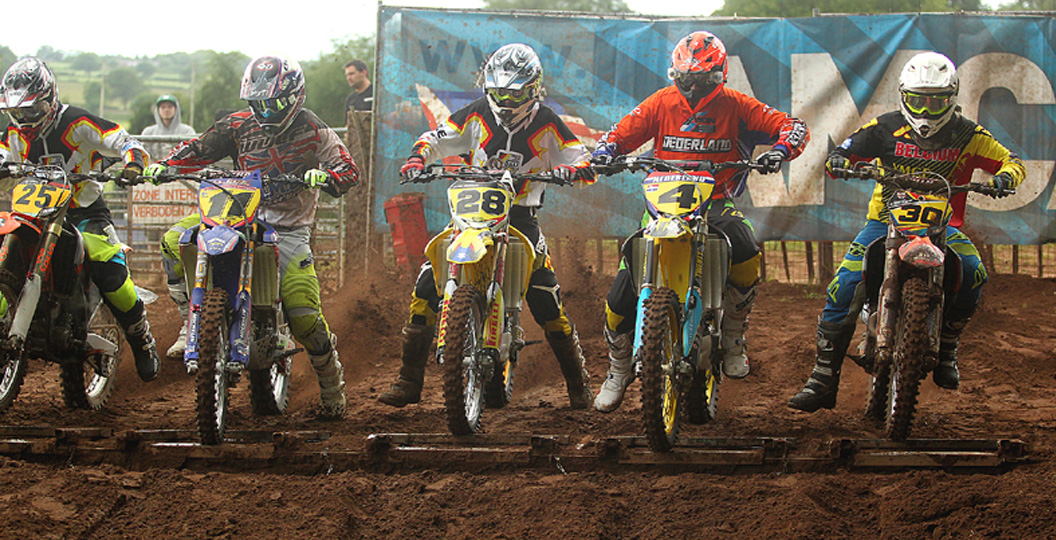 In recent seasons, Belgian riders have been the dominant force during IMBA MX1 European Championship battles and on the evidence provided during the opening round of the 2014 series at Hawkstone Park on Sunday, they could well be the country that provides the main medal winners yet again!!.Making his IMBA debut and just like his more illustrious fellow countrymen such as Everts,Smets etc,young Jilani Cambre proceeded to produce a motocross master class as he strolled to a stylish and very comfortable hat-trick of moto wins.Joining the super Belgian on the Hawkstone podium was Dutchman Paul Spierings in 2nd and 2012 IMBA Champion Vincent Collet,also of Belgium in 3rd.Doing their very best though to upset the dominance of the riders from main land Europe was a squad of seven battling Team AMCA Great Britain pilots who gave their all and so much more.And,after three exhausting battles our battered and bruised heroes were to send the Union Jack waving supporters home happy as Brad O’Leary finished top Brit with a great 4th overall and Jack Cox took a well deserved and gutsy 5th overall despite a couple of crashes.Luke Meredith would also have featured inside the final top ten overall placings but for a final moto crash,instead having to settle for 13th as Shaun Pearce took 14th, Clinton Barrs 15th,debutant Tye Barrs 20th and Richard Cannings 27th.

Following heavy overnight rain,the going on the grand old Hawkstone circuit was exceedingly heavy,but desperate to make an immediate impression,Jack Cox posted a very quick qualifying time.However just when it looked likely that he would have first pick of the starting positions,Collet turned up the heat to put in a supersonic and very late lap to thus snatch pole position away from the Midlands based youngster!!.Ominously although Cox was 2nd fastest he was the only AMCA British rider inside the top ten!!.

With all eyes on Cox for the opening IMBA MX1 clash of 2014,it was instead local Shrewsbury rider Shaun Pearce who got out first and gloriously lead the pack with another Brit O’Leary in tow.For Cox though the early exchanges were to be simply disastrous as he tasted the Shropshire sand,restarting in a lowly 21st position.At the front,the very talented Belgian lad Jilani Cambre was already on the move as he stylishly took just one lap to glide into the top slot although Pearce and O’Leary were still flying high,digging deep,and maintaining their respective 2nd and 3rd places with Clinton Barrs 6th and Luke Meredith 9th also going strong.In a tight struggle and as expected,Dutch riders Ronnie van Rooji and Paul Spiering were now right in the groove,moving up to make a pass stick on the fast starting Pearce and O’Leary.However in true British spirit,our lads kept on fighting,remained in contention and when van Rooji slipped off,O’Leary was in the right place at the right time to take advantage and now sit in 2nd.From here onwards as Cambre strolled to a massive win,O’Leary had to dig deep and use all of his vast experience to hold onto the runners-up spot despite the very close attention of Spiering as van Rooji took 4th and Collet 5th.Completing an amazing comeback,the rapid Cox somehow still got home 6th with Meredith 7th,early leader Pearce 8th,Cannings 12th,C Barrs 14th and debutant Tye Barrs 19th.

Desperate to make amends following his moto one fall,Cox made a blistering start in the second IMBA clash but just when it looked like the holeshot was nailed,Jack was brought crashing down to earth in a big collision.As the crowd gasped in horror and with Cox trapped under his bike,somehow the majority of the following pack then managed to avoid the stricken rider!!.Battered and bruised,he was soon on his feet before dusting himself down and remarkably re-joining the race.Up top,Clinton Barrs,a rider who openly does not enjoy the Hawkstone sand had made a stunning start before being overhauled by Cambre,Spiering and Jarno Verhorevoort whilst O’Leary(5th),Cannings(6th) and Meredith(7th) were all right on the gas and charging hard.Just like the opening clash,Cambre then cleared off into the distance and take the win as O’Leary produced another classy ride to be top Brit home in 5th with C Barrs 9th.After starting strongly though both Cannings and Meredith were to hit trouble in the closing stages.As Cannings crashed hard with just two laps remaining and breaking some ribs,Meredith also had to visit the medical station after discarding his goggles and getting an eyeful of sand for his troubles!!.With Pearce finishing 15th and Tye Barrs 20th that leaves just a sore Cox.Well what a truly gallant performance he produced,coming from a distant last to bag 13th!!.

At the third time of asking,Cox finally got away safely in the early exchanges of the final Hawkstone moto,quickly finding his rhythm and speed to hold 2nd spot behind the flying Cambre.Indeed in an impressive start for Team AMCA Great Britain,Meredith slotted into 3rd with O’Leary 8th and Pearce 13th.Enjoying the sand challenge,Meredith was on a right charge and even looking to overhaul Cox until dumping his KTM on exit from the Hawkstone bomb hole,dropping back to 8th.Unfortunately on the same lap,O’Leary was to also crash as his handelbars kicked back and into his stomach,forcing the Rugby rider down to 14th.With the gruelling circuit now devouring its victims,the classy Cambre though remained totally cool and collected to complete a perfect maximum score.Gaining some big points and consolation for a painful day,Cox took a great 2nd place in this final clash with Pearce the next best in 12th and followed home in a line by fellow Brits O’Leary,C Barrs and Meredith.Next up for our IMBA MX1 European title chasing lads is a trip to Werchter in Belgium where they will be looking to defeat Cambre,Collet and co in their own backyard!!.

On an absolute bumper weekend of AMCA action,Ed Briscoe warmed up very nicely for his next Championship adventure at Bevercotes by blasting to a brilliant maximum points win in the Experts Unlimited class.Other winners included Alec Everitt,Sam Alderman,Sam Hamer,Ollie Rutter and Martin Mcdermott.