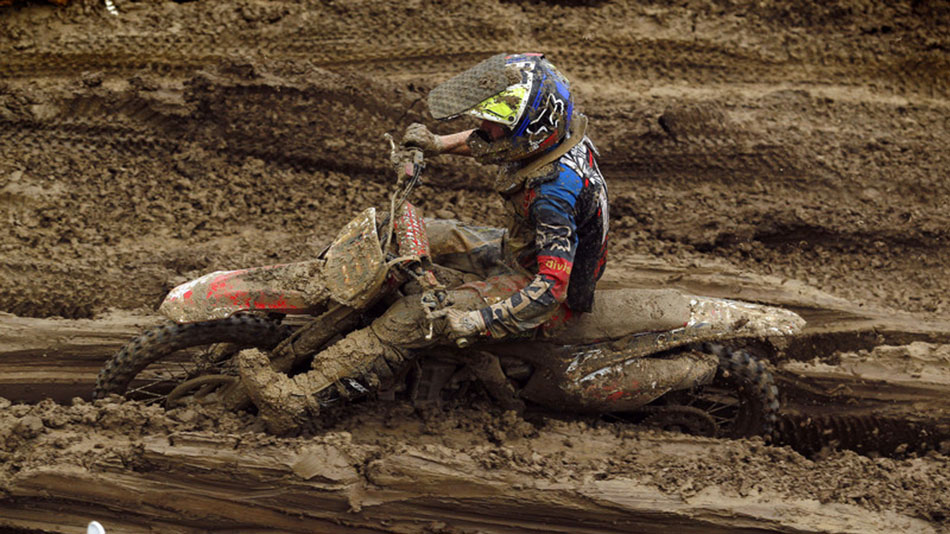 Day of unfulfilled promise for HRC!

Max was firmly within the top five after the start of each of the two races on his CRF450RW, sitting as high as third after the second start, and his confident qualifying form was very much evident. However, across both races he was involved in the accidents of others on four separate occasions.

As a result, he was forced to fight back from last in race one to finish tenth, and crossed the line tenth again in race two.

Evgeny Bobryshev didn’t fair much better either, as although he rode to seventh overall in race one, he was forced to retire from race two after crash damage to his CRF450RW.

The morning’s weather brought sun and warm temperatures for the first race, but before the start of the second the rain came in a heavy downpour that lasted for the duration of the 14 laps, transforming the hard-pack dirt surface into a slippery and heavily rutted challenge.

Max Nagl: “I had a great Saturday and was feeling good all day, and because the track was deep ruts I liked it. I came into today with a good feeling, and although my first start wasn’t great I still managed to be fifth, but then first lap [Steven] Frossard crashed in front of me in a rut and I had nowhere to go and our bikes got stuck, and then I got stuck again behind another crash, but my riding was pretty good and I passed many people back to tenth. Then in the second race in the rain I made a better start and was third, but then in the first corner after the finish line there was a deep rut and Shaun Simpson crashed in front of me and again I had no chance to move out so again I got stuck until I was almost last. Then on the last lap another rider came way fast down the second hill and just cleaned me off the track. I’m happy I didn’t get hurt. It’s never happened four times in two races that you get stuck in someone’s crash but you can do nothing, just standing there waiting until the bikes are unstuck. A terrible day for us today. There’s not so much we can do about it because it’s not about the bike or me, it was just unlucky.”

Evgeny Bobryshev: “Yesterday things were fine but still I was suffering with my back injury from Arco. In the first race I was too stiff with my back. I couldn’t have my balance on this type of track because of the deep ruts and long corners where you have to use your body a lot. Unfortunately I lost sixth position in the last lap because I was stiff and made some stupid mistakes. The second race was worse because on the first lap somebody jumped into my back and then I crash and my throttle got a bit stuck from the mud. I could still use it, but then one moment it was too stuck and I couldn’t bring it back so I jumped too far and then crashed again. My throttle was then completely broken so I have to pull out. It’s really bad for me, but I hope these next two weeks my pain gets better. I will work hard to come back in Valkenswaard in good shape with no pain.”

Keisuke Inomoto, Team HRC Team Principal: “Yesterday was a good day but today we were very unlucky with accidents for both riders. The starts were pretty good but the problem is that around 5th or 6th place in the opening laps is a dangerous position for crashes, so we must work harder to improve position in the opening laps. Max never gave up though and took some good points, and there were no injuries so now we can move our focus to next GP at Valkenswaard.”

Roger Harvey, HRC General Manager – MXGP: “A difficult, difficult weekend. Max’s win in qualifying yesterday was good and we expected that to run into today. When you have someone crash in front of you though there’s nothing you can do. Max just got tangled up with riders several times and then got taken out on the last lap of race two, which really just capped the day off. The rain came for the second race and the conditions caught a lot of people out. Bobby went down very early on. He just lost it in the slippery conditions like a lot of riders did, and then had to pit with damage to the bike. Really, the only positives are that the pace was there yesterday and we’ve shown that we can do it, and that the riders weren’t injured. We’ve just got to go away and learn what we can from it and come back next time.”