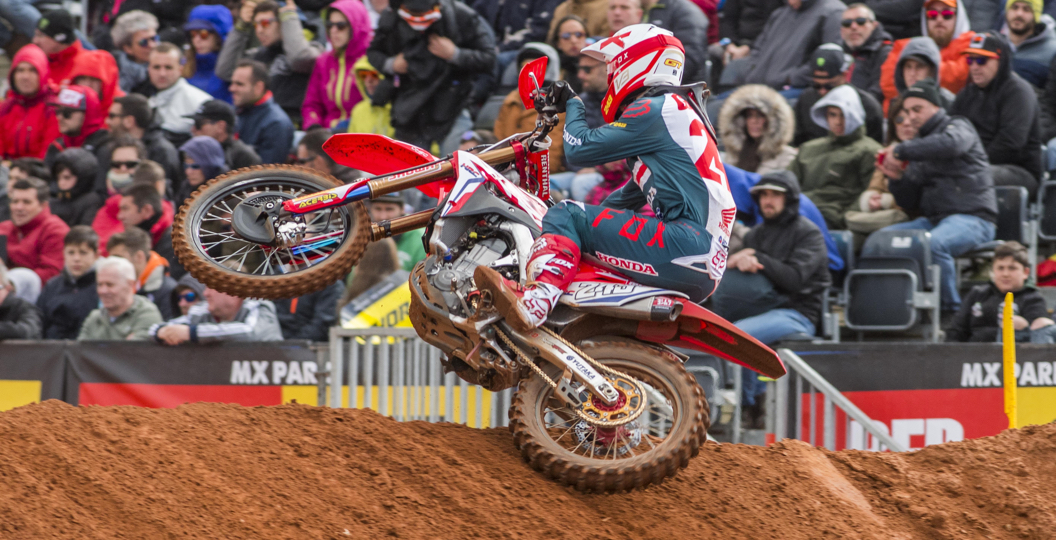 Day One: MXGP of Spain

The Spanish fans did not exactly get what they came to see on day one of the MXGP of La Comunitat Valenciana, but the qualifying heats still delivered on many different levels. The high-speed layout and choppy conditions ensured that racing was tight throughout the field, but also made it difficult for some of the elite stars to separate themselves and gain a significant amount of ground. There were many layers to the action.

Tim Gajser won in what was a convincing ride that most seem to have overlooked. The Red Bull KTM duo continue to dominate headlines, no matter where they finish, and this race followed that pattern, especially seeing as they tussled on the cusp of the top five for a lot of the race. An outing like this is exactly what Gajser needed though, as the last twelve months have been full of hiccups that have cost him momentum. Could a small victory like this help him find an extra tenth or two that is needed in order to win consistently? Perhaps, but that question is not going to be answered until tomorrow.

“It feels great to win the qualification race,” Tim Gajser said in a team statement. “I’ve been feeling really good all day; the start was really important and we got a very good one and also speed and consistency were there – despite a couple of mistakes. Overall I am really happy. The goal now is to do the same tomorrow and have fun, because when I do I’m fast! A big thank you goes to the team; today is a very important day for me and I’m happy to celebrate it by winning the qualification race.”

Although Tim Gajser and Romain Febvre were not close enough to exchange blows, they were never separated by more than a couple of seconds. There was always a sense that something could happen. The times below illustrate that point perfectly, as it is very clear how close the pair were.

It was actually rather interesting to watch the battle for the heat win unfold. The momentum will be valuable over in the HRC camp, but then it would have acted as a much-needed boost for Romain Febvre as well. Just running that pace for an entire heat and being able to see the leader cross the line is something that the latter can cling to, however, as performances like that have been few and far between over the last two years. Replicating it tomorrow will not be possible without a good start though, because of the fast layout and limited areas to pass.

Jeffrey Herlings and Antonio Cairoli learnt that the hard way today. It was not like the heavyweights had awful starts, as they ran in seventh and eighth at the end of lap one. Fourth and fifth was the best that they could do in the twenty-minute moto, however, despite the fact that they were pushing the limits and had some of the quickest lap times. A lot of riders have mentioned that they hope that not too much work will be done to the track this evening, with that in mind, so that it gets rougher and more places to pass develop.

It seemed as though Jeffrey Herlings was going to break Antonio Cairoli during the first half of the qualifying moto, because he responded to the advances that were made and established a nice bit of breathing room. The final ten minutes were not as kind to Herlings, however, because he lost a significant amount of time on the first half of the track and ended up being passed by Cairoli. Is that a momentum shift and a sign that the next couple of tracks, Pietramurata and Agueda, will favour the reigning world champion? It will certainly give his camp hope.

Sector two has been highlighted as an area where Antonio Cairoli was much better than Jeffrey Herlings, but how did the times look in the second half of the heat? Those are featured in the table below. It is quite clear that a couple of tenths were shaved off a lap and, when lap times are as close as they were today, the difference that makes is huge.

How about the fact that Jeremy Seewer is turning into a formidable contender aboard the bigger bike? There is no denying the fact that he has exceeded expectations thus far, as he tussled with Jeffrey Herlings for a handful of laps and ran inside of the top five quite comfortably. This is quickly becoming one of the greatest signings of the off-season. Evgeny Bobryshev is also deserving of some props, as he returned to the top ten and charged forwards to get there. Although he is still quite a way from the level that he was at last year, he is gradually improving and dragging the all-new BOS GP team along with him.

Another note to consider is that Shaun Simpson was stuck in third gear during the second half of the race, much to his dismay, hence why he dropped back ever so slightly towards the end. Twelfth is the position that he will start from tomorrow. What about another Yamaha pilot, Jeremy Van Horebeek? A crash restricted him to fourteenth and that happened after his hand slipped off the bars, which he claimed that had been happening all day. It is important to consider that he is extremely beat up after that crash in the second moto at Valkenswaard and will not be at his best tomorrow.

Onto the MX2 class, where there were superb battles and surprises. The results were extremely similar to what is considered normal in the end, however, as Pauls Jonass romped to yet another victory. Jorge Prado was nipping at his heels the entire way though, along with Darian Sanayei. It was an explosive battle that once again emphasised just how difficult it is to gain ground and makes passes on this Spanish circuit. There was some inconsistency, as the times below show, but the trio were never separated by more than four seconds.

Darian Sanayei was actually on his second bike during that qualifying race, as there was a small mechanical issue with his race steed, which makes his ride even more impressive. Although the machine has all of the same components, it is still different to what he rode all day and felt so comfortable on. It is also worth noting that he set the quickest lap (1:50.165) of the race right out of the gate.

The battle up front was gripping, just as one would expect by looking at those lap times, but it would not be too surprising if none of those riders win tomorrow. Thomas Kjer Olsen charged forward from a mediocre start, passed Hunter Lawrence for fourth and then closed in on the leaders with ease. A handful of riders mentioned that Olsen was flying at this circuit in the off-season and, based on what occurred today, they were not wrong. Remember, he has just a single Grand Prix victory to his name and is the closest to Pauls Jonass in the points currently. Look at how much better his times were, when stacked up against the current series leader.

Although the on-track action indicated that it was a fiery affair, as there were so many riders just seconds apart for the duration, there were not too many noteworthy points in the MX2 division. Tracks like this tend to skew things, as they keep the races close and make it difficult for riders to record runaway performances. However, at the same time, it is difficult to make moves and things can become a little stagnant. There were encouraging performances from the likes of Ben Watson, Adam Sterry, Iker Larranaga Olano and Jed Beaton though.