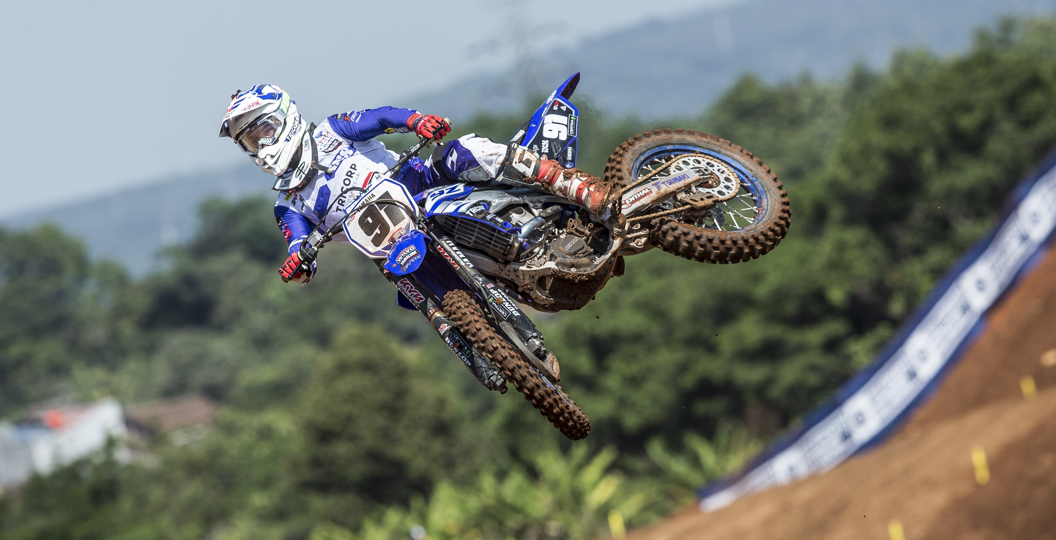 Jeffrey Herlings is slightly stronger than he was at the Grand Prix of Indonesia, seeing as he has had another week to heal, and that is reflected in the results from the opening day at the thirteenth round of the FIM Motocross World Championship. Herlings romped to another pole position, but it was far from easy and looked unlikely early on in the heat.

“I felt good,” Jeffrey Herlings said in the post-race press conference. “I still feel like I did not ride for a while. It is hard to, like I said last week, be out of it for a little break. I just do not feel like myself yet. I feel better every time that I am riding. Obviously we were not at home this week, so we could not do our normal routine, but still it was a good day. I qualified first and feel like the inside gate will be important tomorrow, even though today I took the holeshot from gate three. We will see how things go tomorrow. I think the start is really important and also the heat and how the track will be prepared.”

If a rider is dealing with an injury, then it is most likely that they will start a race strong and then drop the pace towards the end. The opposite applied to Jeffrey Herlings in the qualifying race though. It was actually Tim Gajser who possessed the most interesting at the beginning of the encounter. The lap times highlighted in the table below indicate that the tide turned on lap six, however, as he had to focus on securing second place in the final half of the race. Jeremy Seewer and Romain Febvre were nipped at his heels for the duration.

Jeremy Seewer was arguably the star of the qualifying heat. Although he has mixed it up at the front of the pack before now, this is the first time that he has been able to see the leader for the entire time and also maintained that lead pace. It was not like he had to just focus forward either, which would have helped, because Romain Febvre was crawling all over his rear wheel the entire time. The battle was most entertaining and arguably the most memorable part of the twenty-minute moto, but there was not a single pass. It seems as though there was actually a reason for that though.

“I think the track is absolutely awesome,” Herlings reflected. “Due to how wide and long the track is, I am very surprised at how there are only a few spots to pass. Basically there are not many. I thought it was such a wide track, so it would develop more lines. Maybe they could rip it way more deep overnight and water it or something to get some more lines in there and better passing positions. Tomorrow we will go for good starts and go from there. Still, I do not think that we should underestimate the amount of time that I have been off of the bike and the injury.”

Is there any truth to that? There really is. Eight of the twenty-two riders in the premier division started in the same position that they finished in and that number would have been higher, but the falls that Clement Desalle and Julien Lieber had shook things up a little. Three riders were docked positions as well. Kevin Strijbos, Julien Lieber and Tommy Searle were shuffled back ten spots after ignoring the waved yellow flags. The penalty must sting a little more for the latter, because he was handed the same punishment in the first practice session this morning. There certainly seems to be a lot of focus on this subject at Semarang.

Evgeny Bobryshev is also further down the order than normal, but that was because of a crash rather than a penalty. Bobryshev was already battled and bruised, after hitting a tree at Desertmartin, then fell and hit the same injured knee in the final turn during qualifying. Bobryshev limped off and slumped onto the side of the track, but it has now been confirmed that he sustained some serious bruises. It is unknown whether he is going to line up at the Grand of Asia tomorrow, with that in mind, so a decision will be made in the morning. Bobryshev is a fighter though and will almost certainly give it a go.

There are a lot of riders who are not at one hundred percent at the Grand Prix of Asia; Valentin Guillod is battered and bruised, because of a crash in the first practice session that was caused when he lost grip on the face of a jump. The Standing Construct KTM rider limped to thirteenth in the qualifying race on what he described as a very tough day. Todd Waters is really struggling with an illness as well and was out there to simply finish. A fourteenth was secured in the end, so he did that and it was not disastrous. Twenty-three riders will be on the starting line tomorrow.

The MX2 class is fairly similar, except some of those riders did not even make it to the starting line. Henry Jacobi struggled in the practice session and then opted to withdraw from the qualifying race. Jacobi got a virus on Tuesday and there is so much pressure inside his brain that he felt like passing out whilst hitting the big jumps, he told us exclusively. Jacobi did have some injections today and then he will see how it goes tomorrow, so his status is also up in the air. One would presume that he will ride in the warm up session first in order to determine what to do.

Thirteen Grand Prix regulars finished the qualifying race in the end and Pauls Jonass emerged on top. It was an impressive showing, as he caught and passed Jorge Prado, but there was some controversy. The pass that Jonass made occurred on a yellow flag. No penalties were handed out by the officials, however, and nothing has even really been mentioned publicly. The result is going to stand. If points were handed out in these qualifying motos, like it was proposed a couple of years ago, then there would undoubtedly be a protest floating around. This was actually his first qualifying win since the Grand Prix of Great Britain last month.

“The qualifying race went really well,” Pauls Jonass said in the post-race press conference. “I have not won a qualifying race in a while, so it was good to get a win and get to go to the gate tomorrow first. I had a not-so-good jump on the gate but managed to pass a few riders in the first corner, so was straight behind Jorge [Prado]. I tried to follow him on the first laps and then saw that he made a few mistakes, so knew that I could push a little bit more and passed him to win the race.”

After taking the holeshot and leading for half a lap, Jorge Prado busted out the downhill triple that those in his class had been struggling to master. Prado did not do it consistently after that lap, admittedly, but did pull the pin again after Pauls Jonass made the pass on him. Jago Geerts may have been the most impressive on the leap, as he got across it more often than not. There is no doubt that it is faster. The risk involved outweighed the reward for a lot of guys, but it will be interesting to see who opts to tackle when there is more on the line in the races tomorrow. The track conditions could also have a lot to do with that.

Ben Watson, Thomas Kjer Olsen, Thomas Covington and Calvin Vlaanderen chased the Red Bull KTM duo across the line and confirmed that they are indeed the six protagonists in the division. Fans can count on those guys to fill the top six positions more often than not. Covington may be the one to watch tomorrow, out of those four, as it looked like he had a lot more in the tank, but simply settled for fifth and saved something for the motos. What gave that impression? After charging after those in the top three for a lap or two, he backed it off significantly.

The third rider beneath the Kemea Yamaha awning, Anthony Rodriguez, deserves the most recognition. After struggling with an injured shoulder blade at the Grand Prix of Indonesia, he returned in a big way and charged from ninth to seventh in the heat. Although that may not seem like much of a charge, especially in comparison to some of the rides that guys have had in recent weeks, very few guys made that much progress on the one-lined track. There are obviously not too many guys to pass in the field here, seeing as the number of entries has suffered with injuries and whatnot.

When the Grand Prix contingent emerge from their hotels tomorrow, a lot of focus will immediately turn to the track and the way that it has been prepared. Most will pray for a ripped surface that will create more passing opportunities. The beating sun and temperatures that are set to soar to forty degrees should create a slick hard-pack surface in the end though.