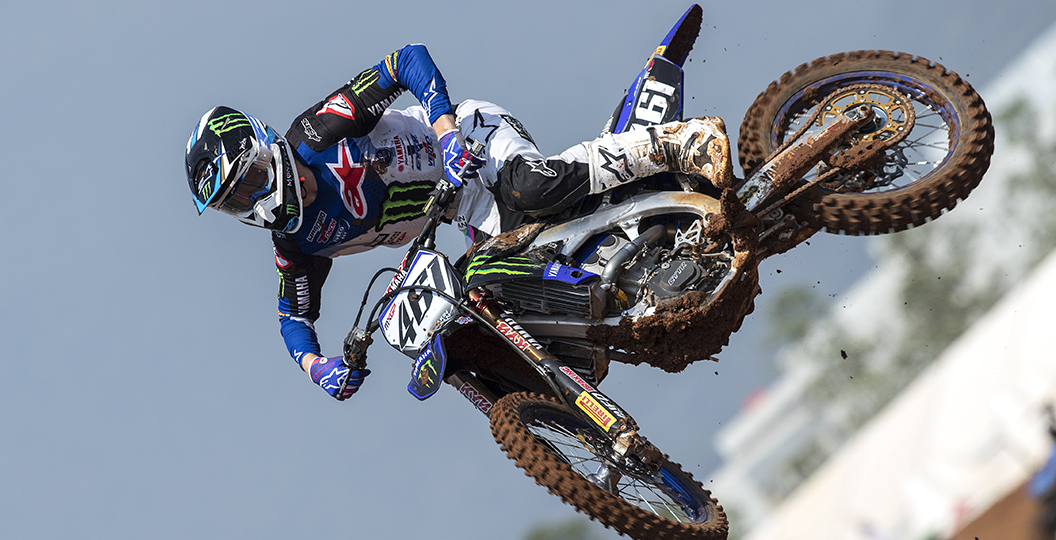 The Grand Prix contingent have not moved too far across the last seven days, as the hour-long flight from Palembang to Semarang was all that had to be completed. Semarang is hosting round twelve of the current term, the second in Indonesia, this weekend and played host to some intriguing moments on day one. It is an exciting time as it seems as though a new winner could be on the horizon.

Romain Febvre reigned supreme in the qualifying heat that did not exactly adhere to the status quo, as he disposed of Tim Gajser with ease and then entered a game of cat and mouse with Glenn Coldenhoff. Febvre claimed the win in the end, his third qualifying triumph this term and second heat win in succession (if you put his moto-two win at Palembang in the same bracket). It would truly be shocking if he does not claim a Grand Prix win for the first time since June 2016 at some point this year and, hey, it may happen tomorrow. Everything is aligned perfectly.

“I had a good start in first place and then coming into the first corner I slowed down and [Glenn] Coldenhoff moved around me,” Febvre said his positive outing. “I am satisfied about my riding. I feel good and it was not so hot today. I was second, then [Tim] Gajser passed me after I made a mistake and I got him back when he made a mistake. I felt I could push today, so I made it happen. First pick of the gate tomorrow, so I am happy. The track has been slightly changed. I like it, the layout is nice.” Today was the first time that he has reached a chequered flag first in Indonesia.

Febvre, among others, later went on to comment that the maintenance crew must pay close attention to the areas that they are watering. The common consensus today was that the areas that did not need to be watered were soaked, then the ones that were crying out for some moisture were left alone. One of those areas that was watered heavily before the qualifying heats was the take-off of the big downhill triple that sits on the exit of turn five. It is quite the stretch, even for an MXGP rider, but everyone went for it on lap one.

Everyone except Arminas Jasikonis, that is. Jasikonis opted to double the jump on the first lap, thinking that everyone else would do the same, but was then desperately trying to avoid being landed on. It was certainly a close call, as Jeremy Van Horebeek missed him by the narrowest of margins. Jonass, who was just in front of Jasikonis on the laps that followed that, then missed it on two successive laps and could have quite easily been cleaned out by the chasing pack. It is certainly worth watching the section tomorrow, as it could make a massive difference to the outcome of the race.

Speaking of Jonass, he was rather impressive after a rough outing at Palembang and sent the timing screen purple on a few occasions. Consider that he was also solid in practice, going sixth and fourth in the sessions, and maybe there is something there? A win is obviously a step too far at this point, but another podium is on the cards. It may be worth discarding those qualifying results when making predictions like that though, as plenty of riders commented that they took it easy on a track that resembled an ice rink.

Tim Gajser was one of those riders, although there may have been more to that. Gajser fell on the very last lap of time practice, in the left-hand corner before the waves, and tweaked his ankle in the incident. It was not a massive crash, but the impact did seem quite abrupt and forceful. “I was feeling okay in free and timed practice,” Gajser reflected in a team statement. “I just made a mistake in the last section of the last lap when I was going for a fast lap and I tweaked my ankle a bit. We worked on it during the break, to make it good for the qualification race, and overall I am happy with my third-place finish.”

A final rider who is worth discussing, following the qualifying heat, is Max Anstie, who was pegged by some as the man who would stop the aforementioned leader. Anstie went the wrong way with his bike set-up in the gap between time practice and the qualifying race, then paid the price for it as soon as the gate dropped on the twenty-minute stint. The good news is that the twelfth gate pick is by no means a disaster, especially on this track, so a trip to the podium is not out of the question at this point. The door is well and truly open.

Onto MX2 then, where the monstrous triple played a pivotal role once again. It did not dictate the outcome of the race, but it did prompt raised eyebrows. Prado did not pull the pin on the triple in the qualifying heat and was prompted by his team to do so, but still held out. There was a lap, around the halfway point, where he did it once, but then he did not pull it again. Was that a power move so that he can sleep tonight knowing that he has it in his back pocket if needed? Maybe. It is not inevitable that the leap will be necessary in the motos, as Tom Vialle and Jago Geerts were the only guys to make it consistently.

“It was a very good race. I felt comfortable and we will see how it goes tomorrow,” Prado said following his eighth qualifying heat win of the term. “The day started well for me. I had a good feeling all day long. I enjoyed the track, even if it was a bit rough in the start. The start was actually the key and I led all the way. I was riding very careful today. It was hot, but not like last weekend. Last weekend the racing was okay, but I feel better on this track. It is fun to ride.” Prado also went on to state that track preparation was borderline being bad.

Two riders deserve credit for the way that they performed in qualifying. Tom Vialle stepped up and proved his worth yet again, despite the fact that this is his first visit to Semarang, and Calvin Vlaanderen put on an impressive charge up through the field. The promising part about the latter is that he later claimed that he could have gone even faster, if needed, but wanted to save something for the races tomorrow. Vlaanderen is long overdue a podium and that may finally happen tomorrow. Those top-three finishers from today did seem rather hard to stop though.

That is all from day one at the Grand Prix of Asia! A recap to tide you over until gates drop tomorrow, which will be early in the day for the European readers. With a dash of luck following the MX Vice live updates is going to be an option in the motos, although connection issues continue to beset us even back at the hotel. Keep fingers crossed!