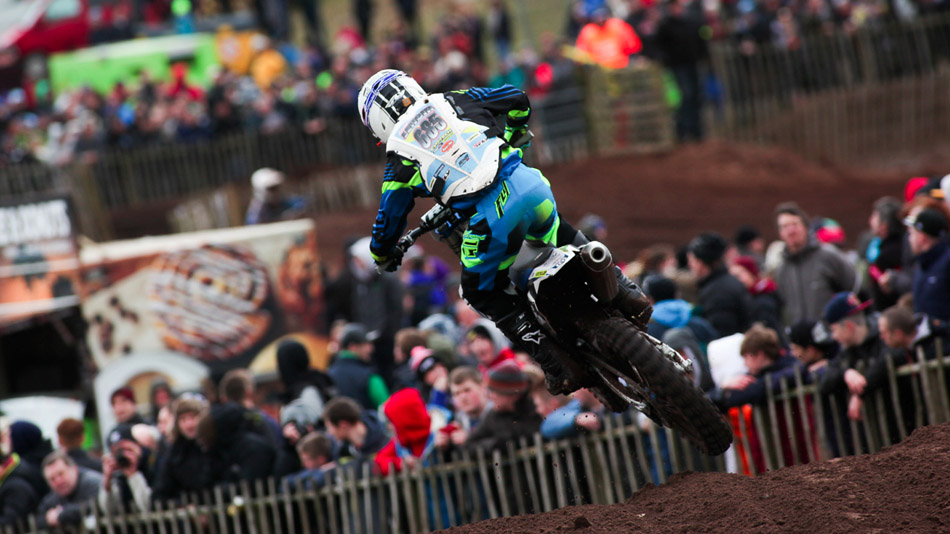 Dantec Husqvarna got its season underway by signing up to the annual Hawkstone International race in Shropshire this past weekend. Cancelled in 2013, the event proved to be extremely popular, and it was in this very colourful, albeit windy, setting that the team made its first domestic public appearance.

For the team’s two senior riders, qualifying proved to be uneventful. In the MX2 class, Steve Lenoir put in a time that put him seventh on the board, while MX1 rider Nathan Watson ended his session eleventh, despite not getting a good fast lap in.

For Lenoir, the first race was an example in consistency with a run in fifth throughout. The second race was somewhat more eventful; after finding himself in fifth again, Lenoir had a tough time picking his way around the track and dropping back as a result. The ninth place, combined with his first score of fifth, left him seventh overall on the day. The subsequent mixed-class super final ended in fourteenth after several battles with both his own class rivals, as well as some from the more powerful MX1 class.

Watson’s first race ended in seventh place after a mid-pack start that required him to battle forward throughout the thirty minutes on the track. The second race ended before it even began; whilst working his way forward from a mid-pack start, a hard crash smashed the bike up and he had to make the long walk back to the paddock. Despite this, Watson still took a sixteenth place overall on the day, which placed him in the super final, where a consistent run earned him a thirteenth place.

“Not too bad, first day back in the sand; I haven’t ridden sand in a long time, so the track was really tough. I didn’t want to crash, the track was gnarly! Had a fifth and a ninth, and fourteenth in the super final. First race went alright, the second not so good and for the last one we changed the bike a bit, I was feeling better. I just went smooth, there is no point in crashing, this is just a warmup. We’ll get better, now. That I’m back in Europe I’m going to prepare for the next race.”

“In qualifying I had a few issues and ended up eleventh; I didn’t get a good lap in. In the first race I got an average start, mid pack, got back to seventh. The second race was terrible, I had a big crash and had to DNF it because the bike was totally written off. I was a bit stiff into the super final, changed a few things and had to go out on the spare bike. I had a good start but then ended up in a bit of a pileup, I was quite a bit back, so it’s been quite an average day.”

“It’s been a positive day for the team. Both Steven and Nathan have shown good speed. Steven’s holeshot in the super final was a good reward for the team’s hard work in the engine department. Nathan’s charge through the pack in the first race to seventh was very impressive and he was very lucky to walk away without major injury after his second race crash. The team continues its pre-season races and will travel to Ernée for the first round of the French Championship this coming weekend.”