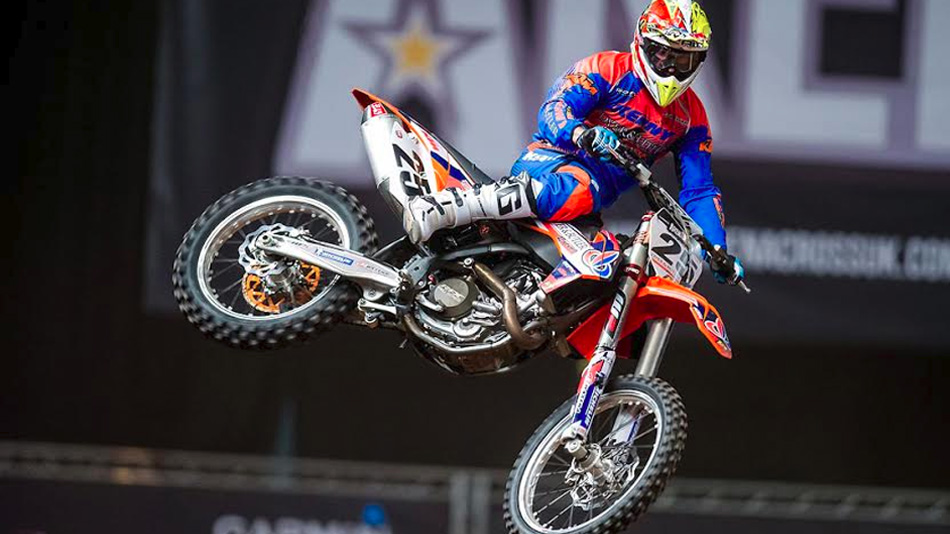 After a victorious start to the Garmin Arenacross UK Tour, Dyer and Butler KTM headed to the LG Arena for round three of the tour. Following the soft track of the opening rounds, the riders were greeted with hard packed dry circuit, which made for much closer racing.

The Birmingham venue saw Steven Clarke looking to reclaim the lead in the standings in front of his hometown fans. During the practice and qualifying sessions both Steven Clarke and Jamie Law produced some solid lap times as they got used to the track conditions and layout.

The evening started with the Heat Races and in both heats there was drama for both Clarke and Law. In Clarke’s first heat of the evening, the KTM rider took the holeshot and early race lead until a crash with two laps to go dropped him to fourth place at the flag. More drama struck Clarke in his second heat when he was running in second place before crashing and slipping back to 9th place. In Law’s two heat races, his 9th and 5th place finishes were not enough to transfer direct to the Main Event.

Unfortunately both riders had to face the dreaded LCQ to try and secure one of the two vital transfer spots. As the gate dropped Clarke started in second behind Brad Anderson, and quickly passed the Honda rider for the win. Meanwhile Law started in the top 5 and quickly moved into third place, but ran out of time to make a move on Anderson and missed the Main Event.

In the Main Event Clarke had to deal with the outside gates and had to work hard to recover from a crash on the first corner, after entering the first turn in fourth, Clarke was taken down by another rider and spent the whole race recovering to finish in 9th place and finish the evening 3rd in the Championship.

Steven Clarke – Tonight has been a rough night for me as I had crashes in both my heat races and then had to go to the LCQ. In the Main Event I was 4th going into the first corner and then I was taken out by another rider. It’s not what I wanted to happen, but I’m glad to get a few points. I’m still in one piece and ready to put some solid moves next weekend at Liverpool to.

Jamie Law – I’ve struggled all night with my starts for some reason and finished 9th and 5th in my two heats. That meant I had to go to the LCQ and I finished in 3rd and missed out on the Main Event. I’m looking forward to Liverpool next week and getting back into the Main Event.

Richard Clarke (Team Coordinator) – Both riders did their best on the night and are fit, healthy and ready to go again in Liverpool. Both Steven and Jamie also remain in the top ten in points with a 3rd and 10th place. At this stage of the Championship it by no means is the Championship won or lost. We look forward to seeing the Dyer and Butler KTM’s back up front next week.