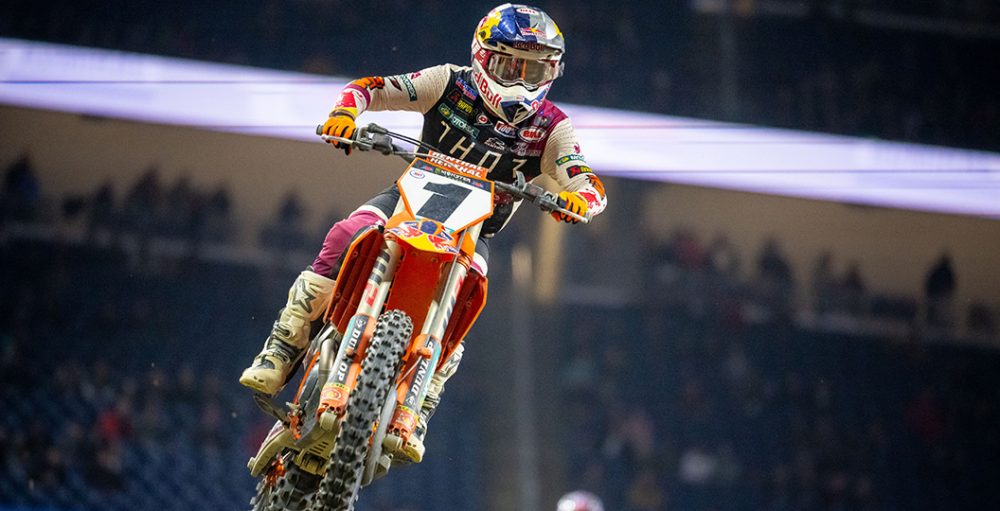 Although initial scans at the Detroit Supercross were clear, Cooper Webb has revealed that he did indeed sustain injuries in the crash with Chase Sexton. Webb confirmed that he has fractured a metacarpal and has got a bone contusion on his shoulder in a short but punchy statement. Webb will race at this weekend’s round of the 2022 Monster Energy Supercross series, Indianapolis, in an attempt to claw his way back into the top three in 450SX.

“Quick update for you guys. Ended up with a bone contusion to the shoulder and fracture of the second metacarpal. Overall I got off easy. I get paid to race, so I’ll see you in Indy.”

Chaos unfolded in the 450SX main in Detroit, Michigan, on Saturday night, as Chase Sexton landed on Cooper Webb and both riders crawled to the side of the track in obvious pain. Incredibly, Webb remounted his KTM 450 SX-F and circulated for a couple of laps with just one arm on the handlebars. Eventually, however, he accepted his fate and opted to head to the Alpinestars medics for further evaluation. The Red Bull KTM Factory Racing  team provided this update shortly after the main event.

“It’s fair to say that Cooper was pretty banged up when he was landed on. Upon initial observation by the doctor here at the track of his shoulder and hand, it doesn’t appear that anything is broken, but he plans to have further evaluation and x-rays when he returns home to Florida on Monday.”

Webb already faced a mighty deficit in the premier-class standings entering round ten of 2022 Monster Energy Supercross, but now trails by fifty-six points with just seven rounds remaining. Webb is, shockingly, yet to claim a race victory in his title defence. If he is able to race in Indianapolis this coming weekend, despite this big setback,