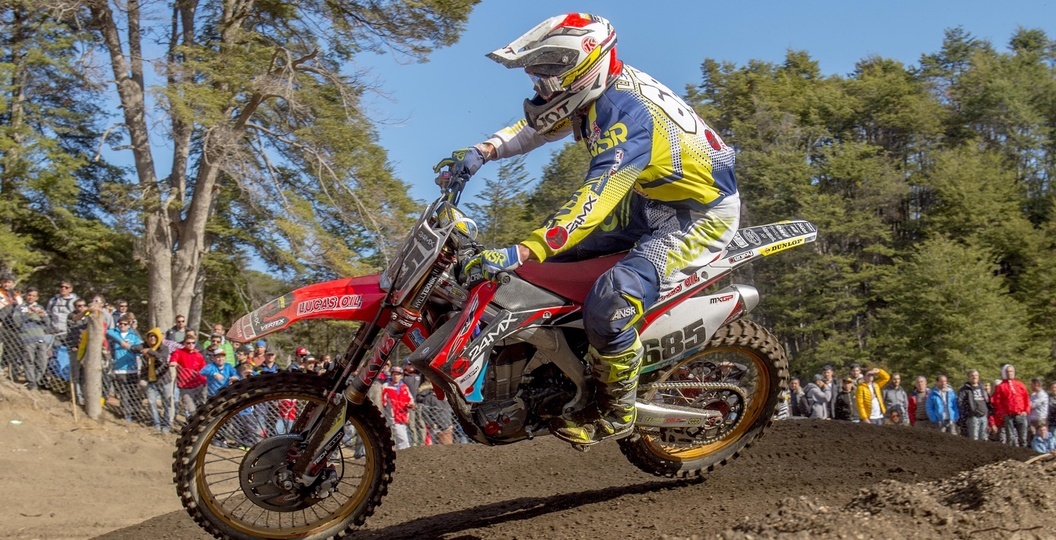 Steven Lenoir took his 24MX Lucas Oil Honda CRF450R to 14th yesterday at the MXGP of Argentina in Villa la Angostura. The Frenchman claimed respectively 15th and 14th place finishes in the motos.

The fourth round of 18 in the FIM Motocross World Championship took place in the scenic setting of Patagonia, close to the Chilean border. For replacement rider Steven Lenoir it was his first ever visit to the Neuquén track. Wide, flowing and with many passing opportunities the circuit is a favourite among fans and the MXGP rider collective. What sets the track even more apart is the unique fine dirt, typical for the volcanic features of the location, with a harder base below.

Never one to be intimidated by exterior circumstances Steven focused on getting to grips with the track on Saturday. Improving his bike set-up all day long the British MX2 champ placed a solid 15th in the qualifying race.

In front of a busy and excited crowd race day started well for Lenoir. He recorded the 14th time during warmup. After a mid-pack start in the first sprint Steven was passed by Febvre and Strijbos early on. It took a while for the 24-year old Frenchman to find his rhythm. Still he managed to come back to 15th by the chequered flag. Race two seemed to replicate the first outing. Another start in the middle of the field was followed by an hectic opening lap. True to form Lenoir put in a gritty performance. He passed Butron, Lupino and Yamamoto to chase Milko Potisek for most of the race. Effectively the 24MX Lucas Oil Honda rider had been clawing his way back to MP32 since colliding mid-air with him in the early stages. Steven had managed only just to stay on the bike but lost valuable positions in the process. Both Lenoir and Potisek displayed similar speed in the second half of the race. However in the end the latter edged out his countryman with 1,5 seconds.

Although Steven went into the GP one of the least experienced riders at the highest level he once again showed what he’s made of. His 14th place MGXP overall finish was also a career-best for the determined Parisian. Next weekend the 24MX Lucas Oil Honda team will take part in round 5 of the series, taking place in Léon, Mexico.

Steven Lenoir: “The first race was difficult. I had some arm-pump and was not feeling so good with the bike. I finished fifteenth, but I didn’t have the feeling that I was looking for. Everything was so much better in the second race. It was difficult; I came through the pack and slammed into [Milko] Potisek in the air. I don’t know how we stayed on! I couldn’t jump though, so I lost some positions. I went back after him, got cross-rutted on a big jump and lost another position. I passed Lupino again and was right there at the end, but I didn’t have enough to stick a pass on Potisek. Overall it has been okay though.”