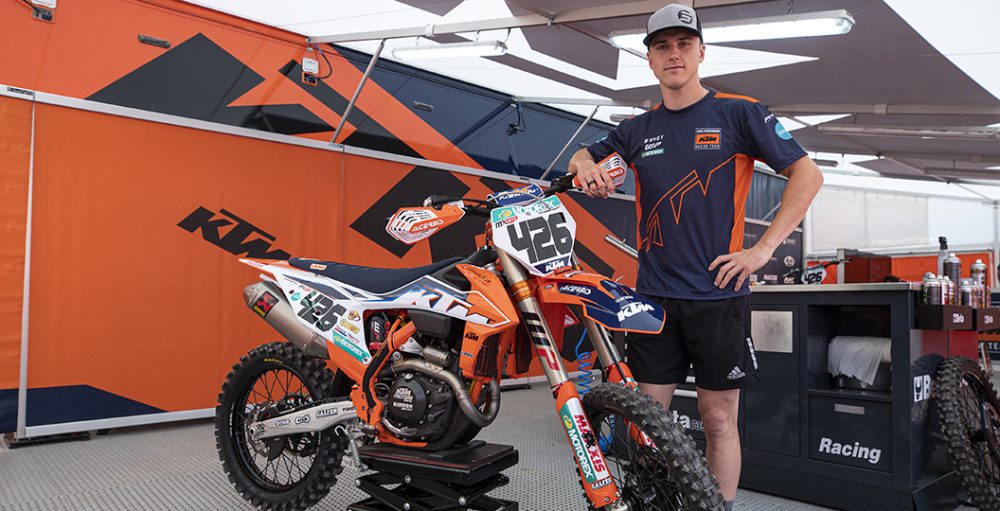 It has been heavily rumoured since May, before a broken collarbone sidelined him, but Conrad Mewse has finally joined DIGA Procross KTM as a fill-in rider for the injured Thomas Olsen. This means that Mewse’s MX2 career has effectively drawn to a close; the deal is for the remaining seven stops of the 2022 FIM Motocross World Championship and he will age out of the MX2 division when the campaign draws to a close. Therefore, a chance to prove himself to potential employers is invaluable. Official communication from the DIGA Procross squad can be found below.

After a serious crash in the qualifying race at the MXGP of Latvia in Kegums in April, DIGA Procross KTM Racing athlete Thomas Kjer Olsen is on the road to recovery. Due to the severity of the injury and lengthy rehabilitation, TKO will not be able to take part in any more races this year. Team manager Justin Amian decided, after much deliberation, to give British rider Conrad Mewse the opportunity to compete in the MXGP category on the DIGA Procross KTM Racing 450 SX-F.

Conrad Mewse, who has already shown his skills several times in the MX2 World Championship and until recently competed with his own team, will compete for DIGA Procross KTM in the MXGP class from the MXGP of the Czech Republic until the end of the season. The 23-year-old Briton has done a number of tests on KTM 450 SX-F over the last few weeks to prepare himself as well as possible for the upcoming tasks.

Justin Amian: “We have been considering for a long time whether to sign a replacement for Thomas Kjer Olsen for the rest of the season. With Conrad Mewse, we were able to win over a young and talented athlete and are looking forward to working together.”

Conrad Mewse: “I’m excited to take on a new challenge with the DIGA Procross KTM racing team this weekend in Loket. I have kindly been given a great opportunity to ride a very strong bike for such a professional team for the remaining GPs of 2022. I can’t thank Anthony at Stebbings for allowing me to take this opportunity as well as all my other personal sponsors for their loyalty and support. Many thanks to Justin Amian and all parties involved for believing in me.”