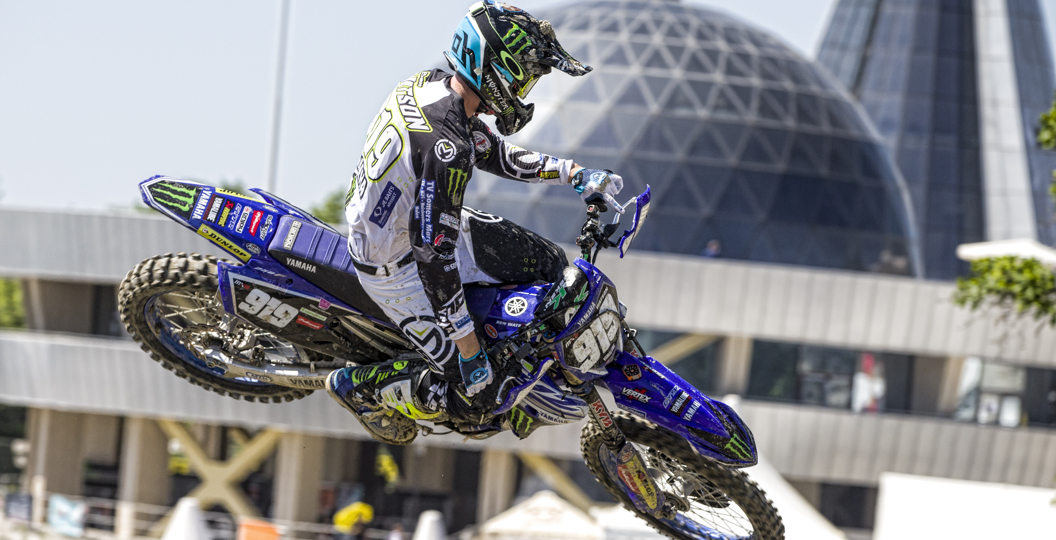 The MXGP and MX2 podium finishers faced the media on Tuesday evening, following successful outings at the Grand Prix of Russia. The comments that Clement Desalle, Jeffrey Herlings, Antonio Cairoli, Pauls Jonass, Jorge Prado and Ben Watson made can be read below. There are no MX Vice podcasts this week, unfortunately, due to some issues.

Clement Desalle: “I feel good, you know, today was a really good day for me. Yesterday I was already feeling great, but the track was really fast and times were tight. I wanted to do the GP step by step and finished with a really good day today. I am really happy with it and my riding. To finally put the green bike in the first position with my team, it is really nice. I was really happy with the first moto, like I said, and the win. I had a good start, which was really important, and could ride some good lines in the beginning. At the end of the moto they came back a little bit, but I was focussed on myself and could win the first heat of the year.

“The second one my start was also great. Jeffrey was fast, but I could keep riding with him and went to the end in second place. I kept focussed until the end and won the first GP. It is a really good feeling, but we will work for a few more.

“I was not really thinking about this [the victory in Russia last year]. Every day is different. It was great to know that I had a good result last year and a good feeling on this track, but I go into every track with the same thing in my mind. I know that a lot of things have to be there on the days that you win a GP. I won last year, okay, so there were positive things, but it was not really on my mind. I want to win every heat that I start. Anyway, I am really happy about today.”

Jeffrey Herlings: “Well, everybody knows the story about how I got here. Once I got to the track it was good. I was good in time practice, second, and won the qualifying heat. I took three good starts, which is important for me and I feel like we are getting better on that. We have more control. In the first moto we got third, which messed up the overall, but came back swinging in the second moto and took a holeshot. I rode good with no mistakes.

“Tracks like this are definitely not my favourite. For a Dutch guy, who has been growing up in the sand and never saw a hard-pack until the age of twelve or thirteen, it is still one of the toughest tracks. It is concrete. I am happy to go to Riga, Latvia, as it is one of my favourite tracks on the calendar. I always enjoy going there.

“We did a good job for the championship, but it does not mean a thing. It is still a long championship, with fourteen races to go, but we did good things. I am really looking forward to the next race and I want to congratulate Clement [Desalle] on a great race – he was super strong. It was the first time that someone has gotten between me and Tony for first and second this year.”

Antonio Cairoli: “Yeah, actually, I am quite okay with the weekend. I know that this track is not my favourite at all. I really struggled a lot all weekend, even with my speed, and I was quite far from the fast guys in time practice. It is not easy to start the race when you are slow. I know that the race is different for me though and that I can keep the pace. In the first moto I had a good start and kept a good second place. Clement [Desalle] was very fast in the beginning and pulled a gap. We came a little bit closer in the end, which was good.

“The start was okay in the second moto, but then I made some mistakes on the first laps. I dropped to fourth. I was following the group in front, but at that point I made a little mistake in one corner and crashed. I lost some time and Romain [Febvre] passed me. I know that this is a very difficult track to pass on, so in the end we only came out in fifth. It is not what we expected, but it is good that we came out on the podium. This was my goal for the season, to be on the podium all of the time, and this we did. It is okay.

“I know Jeffrey [Herlings] is always very fast, especially in the beginning of the race and also the end. It was a very aggressive ride, but this is motocross. It was okay. Nobody crashed, so it was good like this. It is always good to have good and clean rides. We are looking forward to more battles like this. It is also good that Clement [Desalle] is now getting back to form and can be in the mix. It is good for the championship, so I am happy about this comeback.”

Pauls Jonass: “Yeah, I really wanted to have two good races going into my home GP. I had two good starts, so that was pretty good, and then in the second race I got the holeshot and managed to pull a little gap in the first lap. Maybe I relaxed a little too much, so Jorge [Prado] got close to me. We were next to each other with a few corners to go! I am really happy and looking forward to my home GP.

“The season started really, really good for me. Winning the first six motos was great. Maybe I got too much confidence and started to feel too comfortable? I lost a little bit of focus going to the races. I trained hard, for sure, but in the races you have to be focussed all of the time. I was really bummed about those two races, but after Portugal I went back to Belgium and put some hard work in with physical training and riding. It paid off, as in Italy and Portugal my intensity was not there. I just did not feel like myself. Today I feel like I am back, so I am really happy about that. We will keep working and keep focussed.”

Jorge Prado: “Yeah, the weekend was great. I got a holeshot in the first moto, but Pauls [Jonass] passed me really quick. I was behind him the whole moto. With five minutes to go I made a small mistake with some lappers and he made a big gap, so I could not do anything. I got a bit of wheel spin after the gate in the second moto, so I started second and started pushing really hard.

“I improved my lap times at the end of the moto and kept pushing, so on the last lap I gave it my all. I got really close to Pauls in the last sector and tried to make a pass with two turns to go, but it was quite difficult. I am happy with two second places and second overall on a track that is not normally my favourite. It is really difficult for me, because it is really hard, so I am really happy.”

Ben Watson: “Yeah, I honestly have no words. I came here and it is not a track for me, really, as the hard ground is not something that you find where I live. I gave it everything that I had and did not actually realise I was on the podium, so I came off the track and was gutted. I thought I was fourth again. The points go down to a difference of one once you are out of the top four. I came off the track and my team boss was there – I was just speechless. I just cannot thank the whole team, Kemea Yamaha, for giving me this opportunity. I have had a tough couple of years, but they looked at my potential and gave me this opportunity. To finally give something back to them is a feeling that I cannot explain.

“Leading up to this race, everyone was saying that the podium was mine. Everybody was on about the podium. Now, to get it over with and focus on my riding one hundred percent… Like I said, this track is not for me. I cannot wait to get to Latvia, into some sand, and I would love to show everybody something at my home GP.”