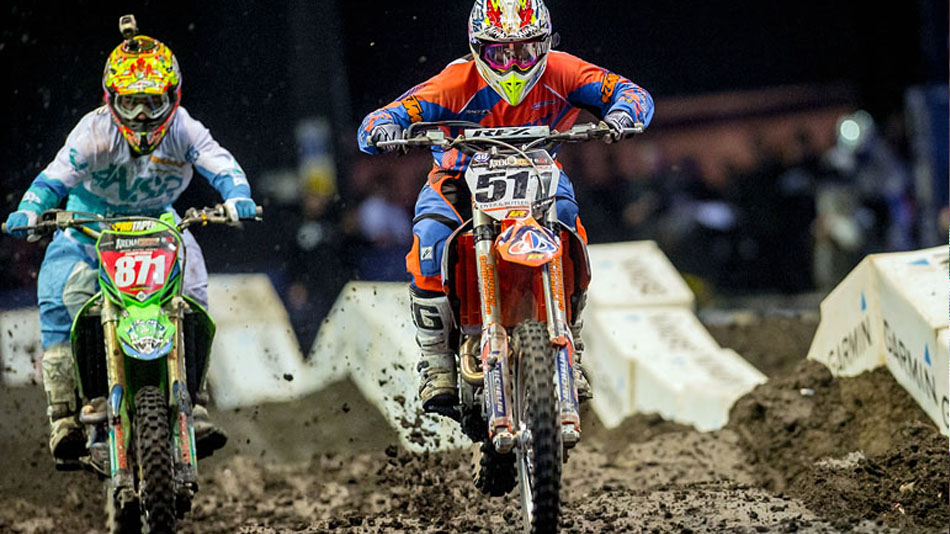 Clarke victorious in Newcastle for Dyer and Butler KTM

On Sunday the Dyer and Butler KTM team made the trip to the north east and Newcastle’s Metro Radio Arena for the fifth round of the Garmin Arenacross UK tour. After a troubled weekend in Liverpool, both Steven Clarke and Jamie Law were looking to improve this week.

Sunday morning’s practice and qualifying saw the team suffer some indifferent results on a very technical track. Steven Clarke felt much more comfortable on the Newcastle track and finished third fastest, unfortunately Jamie suffered a heavy crash on the triple and finished in 21st. After the qualifying session Jamie decided the attempt the main show and see how the races went.

The opening heat of the night saw Steven and Jamie line up together, as the gate drop Steven fired into the lead. Unfortunately Jamie got boxed in on the start and worked his way into 9th place at the end of the first lap and was pushing forward until a crash in the whoops end his race. At the front Clarke was riding strong to take a comfortable race win to erase the bad memories of last week. Following the crash, Jamie decided to withdraw from the remainder of the event with a small injury picked up in practice.

The second heat race saw Clarke grab another holeshot and lead the race early on, until he came under pressure from Coulon in second. The pair battled hard every lap until Coulon made a move for the lead. As the race went on the finish line triple became harder to jump and after a couple of sketchy moment, Clarke settled for second place and a transfer to the main event.

Before the Main event, Steven had to compete in the Head to Head races and won his race against Loic Rombaut. In the second round Clarke faced Fabien Izoird but unfortunately was beaten and forced into the runner up final, which he won to claim two championship points.

The final race of the afternoon was the Main Event and with third place gate pick, Clarke was able to get the jump on the rest of the field. Steven produced a few quick laps at the start of the race to open a gap over the rest of the field. As the race continued Clarke was able to pound out the laps and even a mid race mistake couldn’t stop Clarke from taking his second win of the season in spectacular fashion by crashing on the finish line triple.

After his second win of the tour Clarke has moved into fourth place and sits just four points behind McCoy in second place, while Jamie Law sits 12th in the points as the tour moves onto Sheffield next Saturday night.

Steven Clarke “tonight has been really good, I won the first heat race and then settled for second in the second one. I got two extra points from the Head to Heads which is a shame I couldn’t win that too. In the Main I rode smart and made the least mistakes, well until after the chequered flag had already been waved. The track was brutal and luckily it didn’t catch me out tonight and I got the win so I’m pumped”

Jamie Law “it was really tough, the track was a bit soft and the layout was really technical. I had a little injury from practice but it’s nothing major and I’m in one piece and ready to ride another day”

Paul Hobbs (team manager) “it’s been a fantastic weekend, I’m really pleased with things although it is a shame about Jamie’s injury. Tonight Steven rode really well and deserved to win in the end and I’m looking forward to next weekend now”