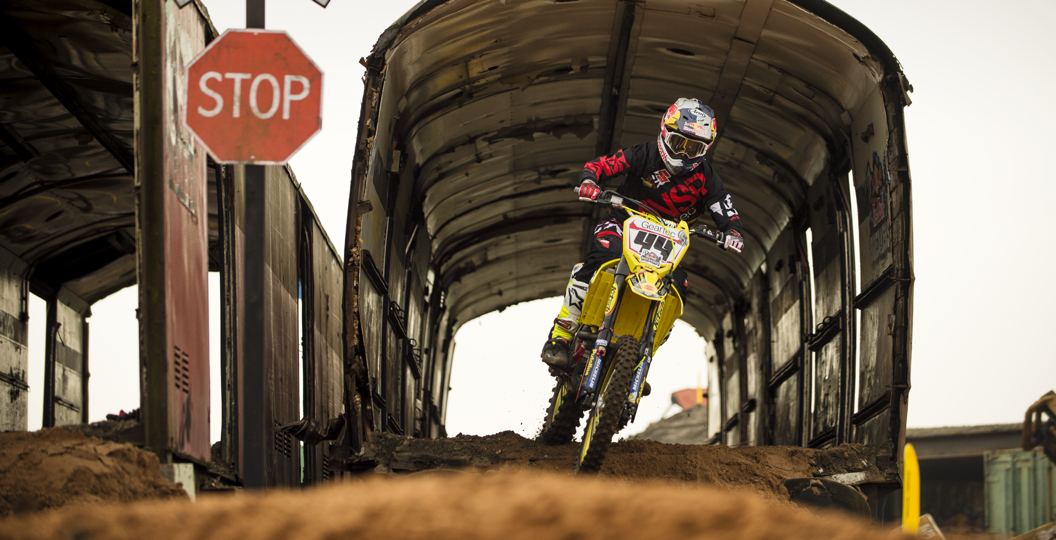 The Red Bull Breakers is something both unique and unorthodox, but it worked. That was the common consensus at the inaugural event on Saturday, which had Elliott Banks-Browne (the brains behind the operation) on cloud nine. This is just the start, however, and Breakers could turn into something so much bigger.

MX Vice: It has been a long time coming and is a bit of a dream come true for you, but the first Red Bull Breakers is in the books! Thoughts?

Elliott Banks-Browne: I honestly don’t know what to say – it has just been surreal really. All this week it just hasn’t seemed real. We have dreamt of doing this, but we just never expected it to turn out as amazing as it has. You never ever, ever see racing like we have had today. Everyone has been able to pass and everyone has had so much fun – that is all we wanted to achieve with this one.

There are not many spectators here, but we just wanted to give the riders a chance to come and have a laugh for once. It has been awesome – I couldn’t have done it without everyone’s help. It has been a long process and I can’t take all the credit. I came up with an idea, then everyone chucked their ideas around at Red Bull. Ben, Jake and a lot of people have made it happen.

I have had such a good week with the guys building the track and it was awesome to win it as well. I would have been pretty gutted if I didn’t win the first one; it just repays Red Bull for all their hard work and the money they have put in. No expense has been spared to make this what it is. It seemed like a success, so hopefully Ben and Red Bull will let me do it again.

This was your concept two years ago, but how much has it changed from the original idea?

It’s not too different. The original thing was to do it in a scrapyard, but I thought it was going to be very difficult to make it look like a scrapyard. I think we have done that though! The concept was the dual lane system. I didn’t want a head-to-head race where everyone could hit each other – I broke my leg doing that and it finished my season. When I said head-to-head I was like ‘there’s no way I’m having any contact.’ It is the end of the year, I just wanted it to be a laugh and I think it has been for everyone.

It has been a long time in the making. When I first came up with the idea I didn’t think it would ever happen, it seemed so wild; Ben was pumped when I first put it to him though. He went to Austria with it and they were pumped as well. It’s been awesome – it feels like it’s a success.

If it does come back is there anything you would change, like track design or format?

Yeah, there are a few different track designs and maybe the format could be changed. I’ll speak to all the riders – I want to listen to what they have to say. Maybe the practice and qualifying went a bit too long? Everyone enjoyed the racing more, so maybe we’ll stretch that out a bit longer? There are little things we could change, but I think it worked pretty well. There will maybe be some different things in the track, but the actual concept worked amazingly.

Like I said, I have never seen racing like it. We were all hiding behind a fence trying to see who was going to win! It was awesome; I’m pumped and so happy with that.

This is something you want to stay heavily involved with then, you don’t want to drift away and let other people take the reigns?

No, not at all! I have been so involved with it since Monday. I have made sure that every little part of that track has been put there for a reason. I wouldn’t want anyone else to do it. I cannot fault anyone who has worked on this project – everyone has put hard work in and made the difference. I can’t take all the credit.

Is this something that you plan on moving? I guess you could take it around the country…

Maybe, we’ll have to have a think. This is an amazing place for it; we were given an amazing opportunity. It could go other places or even different countries. It is just the concept of the split lane – it doesn’t matter how we dress it. I think we can take that idea to bigger and better places!

I guess that is the beauty of it, you can pick it up and take it to other places. You’re not as restricted as you would be with a normal track…

Yeah, this is in the middle of Rotherham. You drive in, drive out and you’re not in the middle of a dirty field. I think this sort of racing can go to great places. It could even be a series – the sky is the limit. We’ll keep working on it and see where we can take it.