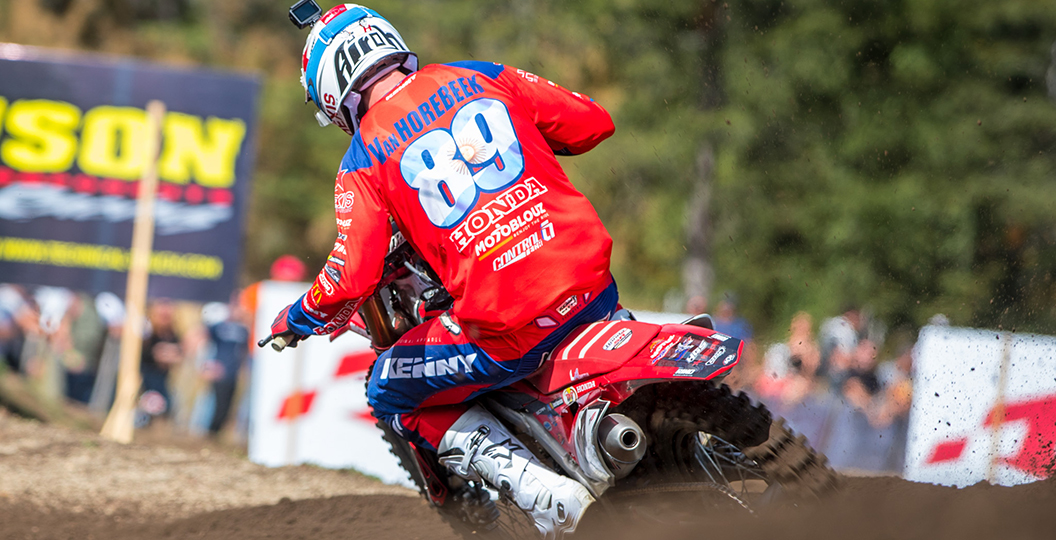 Jeremy Van Horebeek was undoubtedly the biggest surprise at round one of the 2019 FIM Motocross World Championship, the Grand Prix of Patagonia-Argentina, as he came in underprepared on a privateer Honda and still landed on the premier-class podium. Questions were then raised about the quality of the CRF450R between his legs, so it seemed necessary to gather answers in the form of this MX Vice interview from Neuquen.

MX Vice: Obviously two months ago you did not even think you would be here. To land on the podium, run up front and prove that you still have the pace to achieve whatever you want… This must be a mind-blowing experience and one of the most special performances of your career.

Jeremy Van Horebeek: Yeah, it is one of the most special days of my life. I did many podiums and stuff. This one is out of the blue though. It is one of the favourites. Until two weeks ago we did not know what to do, because after Le Touquet we spoke about whether it was possible. We did not have the budget. Josse Sallefranque, the team manager, started phoning sponsors and we found the budget to do the whole season, so we said let’s do this journey. I did not have the best preparation. I rode with the bike a lot for Le Touquet, but it is different. The high intensity was tough for me today and yesterday. I was a bit lucky today, but we finally pulled it together. It is one of the most beautiful days of my life, so I am happy. I am stoked.

Training for a beach race is completely different and there is a lot of sand riding. I am sure that even in the gym it is a bit different. Did you continue to kind of keep an eye on motocross just in case something like this came up? Did you occasionally go and ride a hard-pack track or anything like that?

No, not at all. The only thing that I did before Le Touquet was I started to do physical training just a little bit, then I got the news from him. Le Touquet was a lot of endurance. We did two or three hours a day of riding, but the intensity was twenty heart rates more. Le Touquet is easier compared to this one. Even if it is longer, it is easier, and then after Le Touquet I did a few days of riding and then everything had to go in the crate. No testing, nothing. We had factory suspension from KYB, but still all of that is not on point. Today it was good, but I was still not in the comfort. I had to be careful, so I think we can only make steps forward now if we keep working. It is good.

You have got that factory suspension. Are there any other trick parts on your bike? Did Honda help you out at all or have you just got a stock engine?

It is A-kit suspension from factory. It is not like the real factory one, but it is good enough. We buy parts from Pro Circuit, just a little bit of parts, but my engine is not special at all. I am actually a bit soft in my third gear, so we have to work on this a little bit. It is not a big deal. It is crazy. The factory teams, they put so much money into those bikes. I think my bike is not even half the price of the factory one. What can I say? It is wonderful. I hope we can keep going and going. It will be a wonderful season.

With rides like this, are you hoping to put pressure on Honda to help you out a bit more? Is that the goal, to just get more and more help as the season goes on?

The problem is, we have only got support from Honda France. We asked Honda Europe and they did not want to do anything. They had an offer for me to ride the English Championship, but that is not what I want. It is a bit strange that they did not want to help me out. Even after today, if they want to start to help me, I will still just be with my team manager and stay here. What he did for me is so nice and so respectful. Maybe it will open some doors, but anyway we have to see. We’ll see.

Not to go too much into it, but obviously as a factory rider you were paid a lot of money and had a lot of benefits. Being in this privateer set-up, are you sacrificing a lot in that respect?

Yeah, a little bit. Motocross is my heart. It does not matter. I am not the money guy, but you just have to have a kind of respect for the risks we are taking. You cannot go riding for €100,000. If you do results like that, you cannot. It is ridiculous. I do not care what they say about it. If you see guys like [Gautier] Paulin, they make a lot of money. It is not that they are much better. Some days they will be better, but some days they will be worse. I think we are kind of a similar level. I do not understand the system, but anyway it is what it is. I am thankful for everybody who helped me and everybody who is part of this. We keep going.

I guess that is one thing: Finding motivation is not hard at all, because just to show everyone who did not want to help you out or gave up on you that you can still do it must be pretty sweet.

Yeah, I am motivated, but it is not that I am super motivated. I am just doing my job and what I love. For sure, I want to be in front of those factory riders. I know I can do it. I know some people already think we made a mistake, but at the end of the day we have to stay safe and enjoy this moment. Keep working too, because it is a tough season. Today was a wonderful day, but it does not mean that England will be as good. You can have bad days, crashes and everything. We will stay focused with feet on the ground and keep working.

Keeping with that theme, going back to Europe, is there anything that you feel like you need to work on with the bike or even yourself, seeing as you were not ready to come here?

Yeah. I have a lot of work to do. My endurance is really good, but my intensity is not good enough. We did not work for it. Normally you spend three weeks in Spain or Italy doing sprints and motos. I was in France, in the sand, and just doing endurance, like long motos at an easy pace. That is definitely one point. We have to work on the bike too, because you cannot make a bike in two weeks. Even if I was on the podium, I had some struggles on the track. We keep working on this and we will see what happens.

Just one more quick thing: You did not have a factory motor and, like you said, it is not special. Did you struggle with power anywhere out there? Your starts were good, but then I guess you needed a lot of power to get through the waves alongside the factory guys?

At this point, the only thing that I think is like my third gear is not as strong as it should be. That is where I think those factory engines have the difference. If they are in third gear, they make more meters. That is the only thing.