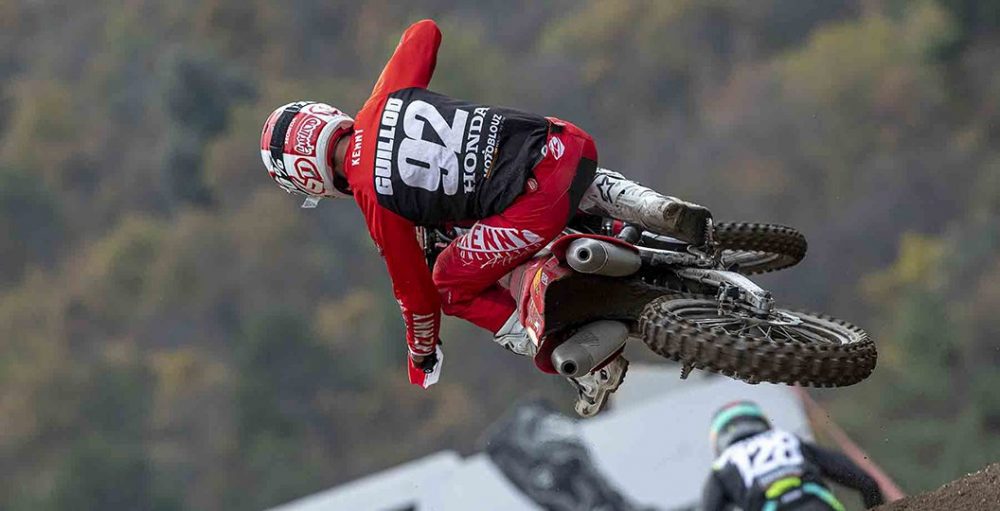 Valentin Guillod has endured a tough couple of years, including one where he didn’t even make it into the Grand Prix paddock. A return to top-flight racing this year was thwarted by a mysterious stomach virus, which held him back through August and September, but he still did enough to earn a good ride for the upcoming FIM Motocross World Championship. Guillod is excited at the prospect of returning to blue machinery and settling into familiar surroundings, so has his sights set firmly on the top ten.

MX Vice: That stomach virus that would not go away really made the season just gone an up-and-down one for you, so talk us through that problem and how hard it was to manage in the races.

Valentin Guillod: I trained really hard during lockdown, to be in shape and fit for racing. We arrived at Kegums and I was struggling so much! It started the weekend before at the French championship – I had big struggles and didn’t understand why. I did the Dutch race at Arnhem the week before and it went quite well. I had two ninths, good rhythm and I was quite happy. It got worse and worse afterwards until it was impossible to ride at Kegums. I was trying so hard to push for one point and it wasn’t where I wanted to be.

The second race was even worse, then the third race was even worse again. It was just not where I wanted to be. I went home before Faenza, but it ended up being even worse there. Hard-pack tracks are where I am strong, but I was even worse there than I was at Kegums. I had to pull out of moto two after fifteen minutes, because I was just so dead. There was a Swiss Championship round after Kegums, actually, and I really struggled a lot there. I was struggling to finish the race, which is only twenty-five minutes there.

The track was flat too – there were no ruts or anything like that. It was not physical at all. I was dying, even between the two races. I knew there was something wrong at that time. I did just one round at Faenza, then did a lot of tests and checks to see what was wrong. We finally found the problem off the back of that. I started doing treatment, which was making it better. It got better with every ride I did from then on. I got back into the top fifteen, then I was in the top twelve in Spain and then I had some top ten finishes in Trentino.

It did get better towards the end, like you said, especially with you being in the top ten in Trentino. Were you happy with those results or do you feel like you can go further than that?

I know that I can be stronger than that! From the beginning of July, when those problems started, I was not training anymore. I was tired and had no energy. I was not training between the races either, even after I started the treatment. If I was able to train and keep my physical level in a good place, then I know I could be a lot better. I showed that I could be in the top ten though. I am just sad about the last race, because I crashed and hit my head. I proved to myself that the problem was not just me though – it was coming from something inside of me. I was still able to be in the top ten, even when I was not in the best shape. I know that if I can work without any problems then I can find my real level.

Did you feel any extra pressure coming into the last season, seeing as you were back in MXGP? Did you want to prove that you belong in MXGP on a full-time basis?

I did not feel pressure from myself, but I really put one hundred percent into my training and everything to do the best results possible. It was not pressure, but it was motivation.

I know you were talking to a few teams for next year, including some that wanted you to pay for a ride. You must be happy with where you ended up? I feel like this is the best place that you have been since Standing Construct.

I am really happy to be a part of this team, with some good people. There are good people involved who have a lot of experience. I also have a good teammate, which is great. I don’t have to pay to ride either, which is a big point. When you are able to do top ten in MXGP, then I do not think it is fair or right that you have to pay to race the year after. I am really proud to be a part of this team. I have to say that I am really thankful to the people who invested in this difficult time. It is really cool to see Swiss sponsors, like Hostettler and iXS gear. Tissot, a Swiss watch, has supported me for many years too and they got involved in the team. It is really cool.

Yeah, I think that I will get the good suspension too and access to the racing service from KYB. I think we have some good parts on the bike – that is great.

It turns out that you had eye surgery in December too. How did that come about? What did the surgery include?

Yeah, so for like ten years I have been putting contact lenses in my eyes. I was not seeing that far ahead. I said that now is the time to get that surgery and it went well. I did it on December 16 and had to stay on the couch for some days, but now I am ready to do some sport again. I will be able to be back on the bike around January 15.

What do you expect from the new season with such good support from Hostettler Yamaha? I guess that you want to pick up from where you left off in Trentino and go from there.

I want to do a good winter of training, first of all. We have three months to be ready for it. I think that my goal for the beginning of the season will be to race between tenth and fifteenth, and then I will try to improve from there. I would like to improve race after race and improve consistently from there. We will see. I think I have everything in my hands to do it. There are good people in the team, we have good parts and we have a good bike. Yamaha remember some great times with me too! I will do everything that I can to be back at that level.

I think that it could be a bit complicated in the first months; April, May and June. I think that the calendar is going to change, because of COVID. I hope that they don’t change too much though and that we can continue racing. It was not easy to know when we had to be ready last year. It was going to be May at first, then June and then they said it would definitely be July. It was actually the beginning of August that we went racing. I think that it will be the same as that this year, but I hope that they do not change things too much and we can keep racing.

I feel like your past is forgotten about sometimes. Maybe it is because you were not in MXGP for a year, but I feel like people forget how good you were in MX2 and on the Kemea 450F as well.

Yeah, it is true. I don’t know. It is a bit strange that people forget me like this. Sometimes I am invisible – people don’t see that I am here. When I did one MXGP round last year, I was thirteenth twice. I was on a standard bike and nobody noticed. That has happened with many things in my life. I was the European champion in 2013 and won in every condition; sand, mud and everything. I raced the Motocross of Nations that year too and was in front of [Ken] Roczen and [Ryan] Dungey, but then I had no ride. I don’t know. Maybe it’s me? It is like this. I have to deal with it, but I will do everything to show that I do not give up and am not done.