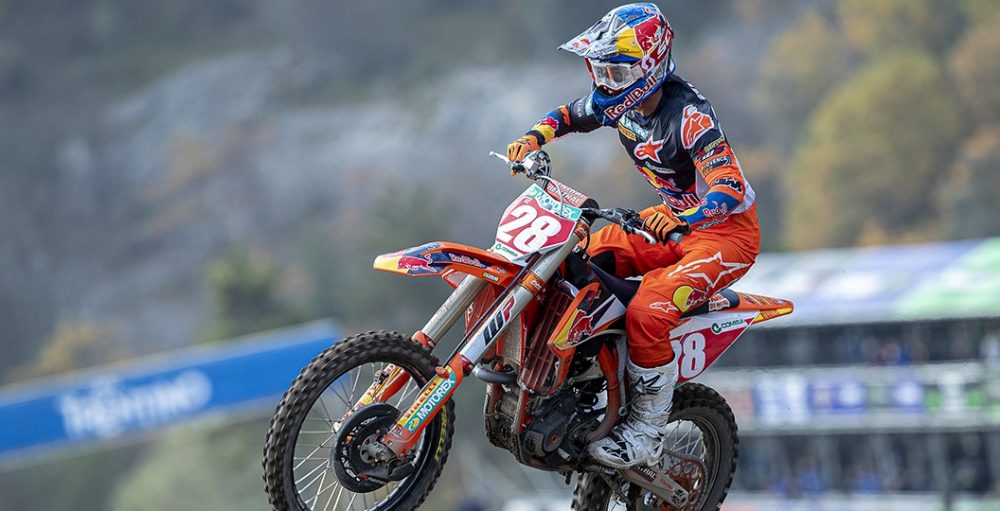 A new MX2 champion was crowned at the penultimate round of the 2020 FIM Motocross World Championship, the Grand Prix of Pietramurata, as Tom Vialle did more than enough to take the gold plate. It was an eventful day for Vialle though, with positives and then a freak issue in the second moto. It was not all smooth sailing! Vialle is candid about that in this exclusive MX Vice interview, which was first published as a post-race podcast right after the event.

MX Vice: Brilliant day for you. You got the title. It’s been a long time coming and no surprise to anyone. You have been the best guy all year. How much of a relief was it for you just to get that done, get your hands on the number-one plate and say you are the champ?

Tom Vialle: Yeah. It was an incredible day. I had a penalty this morning, so I started from last. I made a holeshot and the moto was really nice. To be world champion… It has already been two years and I have made so much effort with my family. We moved to Belgium and everything. It’s really a big achievement. It’s fantastic for me, my family, the team KTM and everybody. It’s just a great day.

Let’s go back to the start of the day. You did get that penalty. Were you surprised when you found out about it? How come you only had one fast lap?

I made one lap already that was really, really good. I said, “I don’t need to ride anymore, because I feel really good on the track.” I didn’t know! For me, it’s a little bit bullshit. It’s okay. I just had to let other people pass, because otherwise I was going to block them on their fast lap. I just did something that was safe for me and for the other riders, but then they put penalty. It’s okay.

You had the last gate pick, but I knew you could get the holeshot as soon as I saw where you were on the line. I guess you thought the same?

Yeah. It was actually quite far and the start is not so long. If it was like Faenza, for example, then it would have been easier. The start is quite short here. I did not put the bike in fourth gear. It’s really short! I made a very good jump out of the gate. I knew I could start good, but maybe not first. I made a fantastic start. In the second moto, I missed it a little bit and somebody hit me. They hit my shifter and I was stuck in second gear. I could not ride with it – that was really unlucky.

Were you stressing out on the start of the first moto? It would have been nice to get it done in moto one, but if you didn’t get it done then you were going to do it in moto two. Were you stressed at all or actually quite calm?

I was really angry that they put me in last and I said, “I’m going to take the holeshot.” It was really nice. It was not easy, because afterwards I was really angry when I knew I got a penalty. I said, “Okay, now I want to win the first moto directly.” I was actually more angry than if they didn’t give me the penalty.

You didn’t actually crash in the second moto then? Someone just hit you? You were upright the whole time?

Yeah, didn’t crash. I felt somebody touch me and it put my shifter under the bike. I couldn’t move. I was in second gear. I couldn’t move the gears, so that was really unlucky. I think this happens only one time in your life. That was really unlucky, because I really wanted to win the overall. I was feeling good. I was, I think, right around sixth position, so it was not so bad. That’s it. It’s like that.

You were in pit lane for two laps. I can’t believe you went back out and finished the moto! There was no real result on the line, so how come you actually went for it the whole second moto? The job was done at that point.

I know, but they changed it and I start to ride. I like to ride and that’s more important. I really enjoy to ride, like a lot. My speed was good too. Actually I was riding almost like Jago [Geerts], so I was more frustrated by that. To be last and riding like first is though, but it’s like that. Sunday is a new opportunity.

You are the champion now. This is a moment you have dreamt of your entire life. Does it feel like everything you dreamt it would be?

Yeah, for sure. Since I was small I looked at all the races, watched on the TV and saw all the champions. I said, “I want to be one day like that.” This day happened. Just fantastic! You know so many times I went to train since I was a little boy, so it’s amazing.