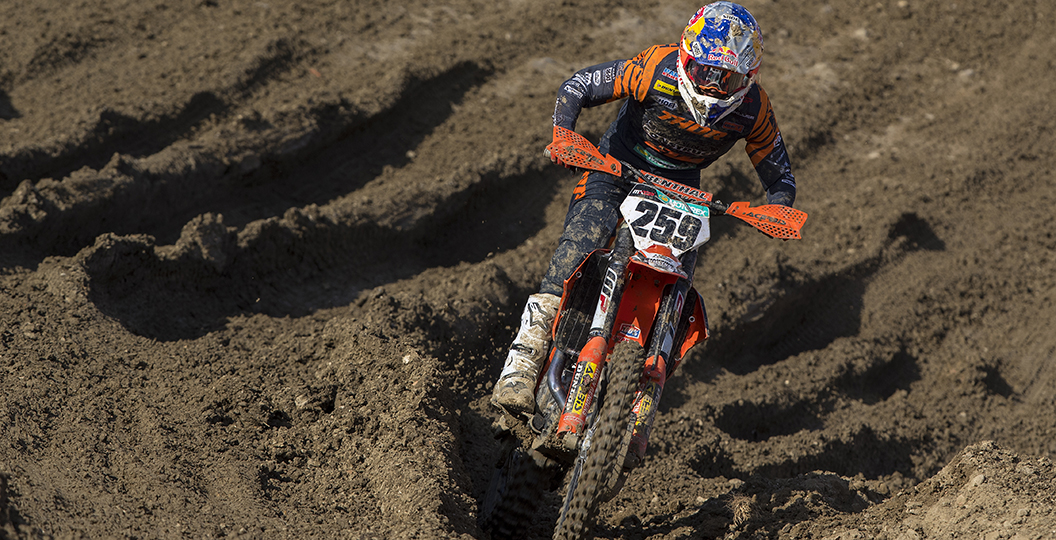 Tim Mathys was not even in the Grand Prix paddock two years ago, yet now he is running a full-factory team and leading GasGas into the FIM Motocross World Championship for the first time. The Standing Construct team was hand selected to run GasGas machines next year, which is obviously a massive deal. How did that come about? MX Vice editor Lewis Phillips caught up with Mathys to find out what went into the decision to become Standing Construct GasGas Factory Racing.

MX Vice: The news is out! Standing Construct will be switching to GasGas in 2020. When did discussions about this first start? Did everything come together quite quickly in the end?

Tim Mathys: Just after the Motocross of Nations I was contacted by the KTM Motorsports department to inform me that Mr. [Stefan] Pierer had bought GasGas and that they had planned to field a GasGas MXGP team in 2020 to promote the bikes, which will be in the shops around the middle of next year. They asked if we were interested in becoming the factory team and running this programme.

We know how professional the KTM factory is when working and the fact that they have the same focus as our team, that being to always give one hundred percent to get the best possible results. We were convinced pretty quickly. In the beginning we were debating whether to also run the MX2 programme but when we made the planning we came to the conclusion that adding a third rider – and on top of that in another category – meant too much extra work, organisation and budget. We decided together to put the focus on MXGP.

Aside from the colour of the bikes, how much of a change will this be? Will you have less control over the technical side now and have to rely on the factory more than ever?

Of course there will a lot of changes, with us being a full-factory team now. We have made some good agreements, which will allow us to keep working like we did last year. We are allowed to keep developing and testing in house, but of course with respect towards the factory in Austria and with very good communication about everything.

It is all very exciting on paper, but did you have any hesitations about taking advantage of the GasGas opportunity? Did you have any worries or just jump straight in?

Robert Jonas, Vice President of Motorsports Off-Road, had a very clear plan from the very first contact, explaining everything very detailed and in a clear way. We immediately knew how they saw the collaboration working, which we liked a lot. We have experienced how good it is to work with the Austrian guys in the past and also in this new collaboration everything was very professional from the beginning. The bike will be based on the KTM platform and will be equipped with WP suspension, which guarantees that we will have the best possible bike to work with again.

Does this open up new opportunities for the team? For instance, had this come together in August would you have had a better shot at being able to re-sign Max Anstie for 2020?

Becoming a factory team changes a lot of things, amongst them the way of being funded and getting the budget together. With the increase of interest from sponsors, the team’s budget gets bigger and that maybe would have allowed us to give Max the proposal that he deserved.

Now the dust has settled, would you care to explain why you were unable to keep Anstie on? It’s time to stop everyone’s crazy rumours and reports. This was just business, huh?

Business is a big word but a rider like Max absolutely deserves a decent paid ride. Unfortunately, we were not able to get this extra budget together and we had to let him go. You know it was a very difficult decision for me personally. I like Max a lot – he is a very nice guy and not the type of guy who is looking for excuses when things do not go like everyone hoped. He always first looks in the mirror before complaining about something.

I really would have liked to keep him in the team but unfortunately, because of a lot of pure bad luck, his results were not like most of our sponsors had hoped. I then had the choice: Either put a bunch of my own personal money into the team to be able to keep Max or put my emotions aside and try to behave like a manager has to and like I do in the construction company. That meant that I had to tell Max that I could not keep him.

Glenn Coldenhoff had a phenomenal end to the season. Glenn credited a lot of the turnaround to some bike changes that were made at the end of July, but could you expand on that?

To me the most important thing was that we never put pressure on Glenn – we gave him all the time he needed to come back from his severe injury. I know Glenn and I know that he isn’t the kind of guy who you need to push to train and live like a professional athlete should. Glenn wants it more then anyone else and does everything he can – sometimes even a little too much – to be the best prepared he can. Step by step he got his confidence back and when we changed a few minor things on the bike just before Lommel that was the little thing he needed to get back to his MXoN-winning level.

You have run a team for quite some time now. Does becoming a factory team and having a potential Grand Prix winner under your tent make it feel like all of the hard work was worth it? You have made it now, in a sense.

You are as good as your last result, so with Glenn having won the MXoN at Assen at this moment we are happy [laughs]. We know very well that after the first round of MXGP next year things can be very different so we are again working as hard and are as focused as we can be to be prepared. Of course getting the results we had from August on was a big reward for our crew. They worked so hard for it, so when it finally paid off that was a great feeling. We hope to be able to experience it again in 2020.

What do you think it would take for Glenn to start the season in the same way that he ended this season? If you look at his past then he typically ends stronger than he starts. Is there anything that can be done to address that?

Like always Glenn – and by the way also Ivo [Monticelli] – is training hard and doing everything he needs to do to be ready when the season starts. We hope he won’t have the bad luck he had this past winter and stays healthy. We realise that it will be very difficult to get on the box again, as there are going to be a lot of fit riders who will be behind the gate. The goal for Glenn is again to get close to the top five and for Ivo to be in the top ten. I am convinced both can do even better, but like I already said we don’t put pressure on them as we believe that works in the opposite way.