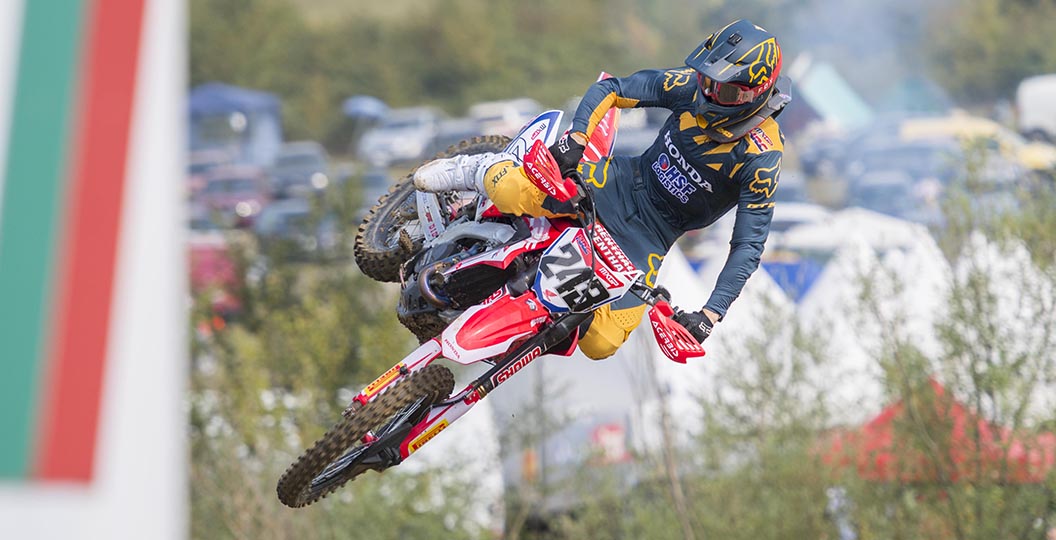 Fans across the globe have high expectations of Tim Gajser, a two-time world champion, so he has not been getting the credit that he deserves this season. Gajser is arguably the best of the rest behind the Red Bull KTM duo though, despite the fact that he got a late start after that horrific jaw injury.

MX Vice: Solid weekend for you. Solid speed all weekend, practice sessions, races and everything. It was another step forward in your progress back to your championship-winning self.

Tim Gajser: Yeah, sure. I am quite happy with the weekend and how the weekend went. I was feeling comfortable on the track. I like that track, so it was good to come after four years again back here. Speed was good already from yesterday. Free practice, timed practice and also the qualification race was good. Today I took two good starts as well. First race I was second and the second one I was third. Second overall. It is good to be back on the podium. Overall, it was a good weekend.

Obviously, you were one of the few guys who got to battle with and stay close to Jeffrey [Herlings] this weekend. When you are staying with him through the opening laps of a race, like in the qualifying race or even moto one, and then he just drops the hammer and lowers his lap times randomly, does that mess with your head a little bit? Obviously through the first three laps you are thinking that things are okay and then he goes. Does that catch you off-guard or surprise you?

Actually, he is so good. I think he is taking time, checking out the lines and everything. In the first race and also yesterday in qualifying I made a couple of mistakes, so I lost the contact with him. When he saw that he gained a little bit and I was not following him anymore, for sure I think he put the hammer down and put the fast laps together. I was kind of struggling. But yes, that is how it is.

I guess if you were right on his rear wheel and then he dropped his lap times, it would be easier for you to follow his lines and then he would carry you a little bit? That is obviously the ideal situation, but like you said, it did not work out.

Yeah, sure. Like I said, I made a couple of mistakes. I lost the rhythm. I lost the touch with him and he was gone. Overall, was good. Definitely he was really fast. The track was quite sketchy today, also yesterday. It was really hard-pack and when they put the water on, it was like ice. I think many riders had problems. I saw in MX2 when I was watching, many crashes were there. The track was sketchy, but I am glad that we finished the GP in Bulgaria in one piece and we are heading now to Turkey. Last three GPs, so the plan and the goal is to finish the season strong. Try to be in the podium and that is it.

In conditions like this, are you trying to make sure that you do not go over your limit so that you stay healthy and consistent? Obviously when you were winning a championship, you did some crazy stuff and sometimes you pulled it off. Sometimes, like Assen, you ended up in a wall.

Sure. When you get older and older, the more experience you have you kind of learn when to push and when to not push. I still feel that I am not one hundred percent. I still feel that something is missing. I just need to figure out what. With the races it was this weekend, I think that is where I can be every weekend. I have a good speed. I can be in the podium. That is the goal now, like I said, to try to be consistent and try to finish the season strong. For next season, try to have a good off-season. With Honda we make a lot of testing. We are improving with the bike and with everything. I am really happy how all the team and everybody is working hard. Together we are growing back.

I guess that is the thing. When there are loads of races like this, it is hard to catch up and get yourself back to one hundred percent. What you need is for the season to end, then start fresh in the off-season and get that solid time under your belt so you can come into next year ready. We have seen it with so many guys. It is just impossible to play catch-up.

Sure. The plan is I will not do ‘Nations this year. Actually, for Slovenia, we are a quite small country and it is quite far for us. I am quite happy, because I want to take all the metal stuff out of my jaw. I have quite many screws inside and some plates. That is the goal after this season is done and after the last GP. We are going to do a couple of tests. I think I can race Sugo, Japanese championship, then I am going to make a surgery operation and try to be ready to start testing and start preparing myself at the end of November to be ready for next season.

I guess that is also the reason why you are not doing Monster Energy Cup again this year. I am sure you would love to, but it just is not going to work out.

Sure. We were planning to do Monster Cup again, but that is how it is. Sometimes everything does not go in the plan. I think the health is really important and to be ready for next season.

I know we are kind of going off-topic now, but you have always talked about America a lot. Even then, mentioning Monster Cup, your face lit up. Do you know about your future yet? I have heard rumors, as always, that talks are happening. Do you know if you are fully committed to MXGP for the next ten years or is it all just up in the air like always?

No, we will see. Definitely next year I am going to stay here in GPs, but for the future still the dreams are to go there. Try to do supercross, because that is what I am dreaming about.