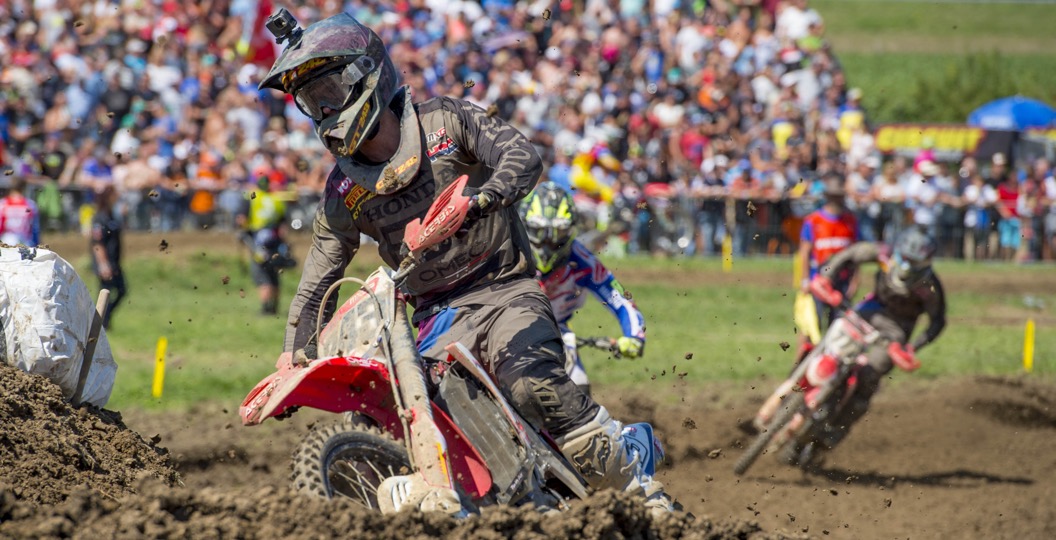 Tim Gajser has flown under the radar since he crashed out at the Monster Energy Cup, for whatever reason, so this seemed like an ideal time to track him down for a catch up and tackle a variety of topics. There was a lot to discuss, as his early exit from the MEC meant that he did not get an opportunity to break his experience down in front of the media.

MX Vice: You are in Italy at the moment, so just explain what you have going on there.

Tim Gajser: We have the new bikes and Honda is making a launch so that all of the media and staff can ride the bikes. I am also here. It is good! I just tried the CRF250RW and I have not ridden that bike since 2015, so it was really fun to ride again. We were just having a little bit of fun. That is what we are doing now.

When you get back on a 250F, does it feel like going home? Do you still enjoy riding it or are you just more of a 450F guy now?

Yeah, the bike is really enjoyable. It is less powerful, easy to handle and you can throw big scrubs. It is nice to ride!

Obviously you have been quite busy since the ‘Nations, as you did the Monster Energy Cup. Just talk about that experience and what you thought of how it went.

Yeah, you know, Monster Cup was actually good. I was really enjoying it. It was something new to me. I had good speed, it was not that bad, but I just had a little bad luck in the first moto. I was running in third place, made a couple of mistakes and then crashed in that rhythm section. I had a lot of pain in my stomach, so we decided to not race the next two main events. We did not want to risk anything. It was a nice experience and I still really enjoyed it. I just really want to do that in the future.

That crash and everything that happened has not put you off then? You still want to get over to the USA as soon as possible, right?

How was it testing in California the week before? Obviously the track in Las Vegas was a little faster than normal, whereas that was a proper supercross track.

Yeah, it was really good! I actually did not test a lot on the supercross track. From the ‘Nations to the Monster Energy Cup I had like one weekend off, so I just spent two days in Corona on the Honda test track. I got used to it a little bit. I would say that you need to train a little bit more to get used to the jump characteristics and stuff. It is a completely different world going from motocross to supercross.

Was it easier than you thought though? Once you got onto the track for the first time, did you pick it all up quicker than you expected to?

Yeah, I got into it really quickly. Before I left for America, my Dad made some whoops on my track and some rhythm sections. I did like two days of riding there, just to get used to it before I went to America. I could start immediately on the whoops and stuff like that. Immediately, yeah, I did the first couple of laps on the track and then I started riding normal.

Did you make any progress with determining when you are going to head to America full-time, whilst spending time with the Honda guys over there?

I will still spend next year in MXGP – that is for sure. My dream is to move to America, like I said, and I am quite sure that I will go there one day. I cannot say when exactly though.

When you were testing in California, did you find that your settings were really off compared to the American riders? Did anyone try to offer you advice?

For sure. I would say that that us Europeans know how to test a bike and suspension for motocross. I would say that the American riders are much better at doing that for supercross though. They ride more supercross and they are focussed on that. For sure it was different, when we went to test for supercross, and we were struggling a little bit. They really know how to test the bike. Anyway, we made a bike that I was comfortable on and I quite enjoyed it.

Switching gears to your season as a whole. Obviously we spoke a lot through the season, but what do you think of it now that it is firmly in the past?

It was not the season we wanted, but that is sport and that is motocross. I got injured and then it was really tough. I had to miss a couple of GPs, then I lost momentum and when I came back it was really tough. I learned something new. Getting injured made me even stronger, as I never quit and I never gave up. We have started working for next year and I am sure that we will be strong.

There was a lot of pressure on you at this point last year, because you had just won the championship, so do you feel more relaxed now?

Actually this year I did not feel so much pressure. The crashes just happened, but I do not know why. Maybe I was expecting too much from myself and was pushing a little bit too much? Sometimes it was over the limit and when you go over the limit you crash. I learnt that for next season and I know how to manage it.

Is there one thing that you are hoping to improve on the bike through the off-season?

Yeah, for sure. Every year we try to improve as well. We have been testing for two weeks in Italy and I am already quite happy. We have made quite a lot of changes on the bike and I feel comfortable when I ride it. You know, I am really confident. We will try to work hard on my body too, so that I am fit and ready for the season.

Finally, I have to ask. There have been some wild rumours going around that you will race at Anaheim 1 in a few weeks. That is not going to happen though, is it?

No! Definitely not this year. They are just… I don’t know, I never said that.