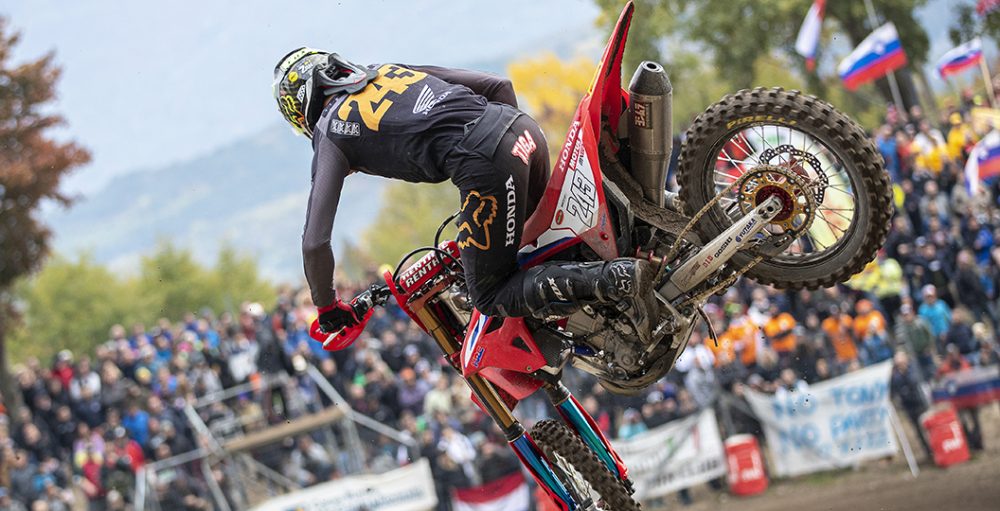 Tim Gajser faced a 27-point deficit to the red plate at this time last week, but he is now just a single point behind the series leader. Not a bad turnaround, right? It is all to play for now, of course, as it is effectively a winner takes all scenario. A worthy champion will be crowned in one week, following the two events at Mantova (those being the Grand Prix of Lombardia and Grand Prix of Citta di Mantova).

Gajser discusses the intense scenario in this exclusive MX Vice interview from the recent Grand Prix of Garda. The fact that his start need to improve is dissected, as is his choice to stay away from the scoop tyre. Interestingly, he also admitted that this is a super stressful fight and something that he struggles to stop thinking about. This interview was first posted as a post-race podcast on the MX Vice network.

MX Vice: A very good day for you, especially with that second moto. That has kind of been the story of your Trentino trip, actually, because the second moto has always been better than the first. Is there anything to that?

Tim Gajser: Yeah, exactly. I have been struggling a bit with the first motos the last couple of weeks, not just here in Arco. The second ones are always good with better starts and better riding. Now we have seven days to try to work on these things!

I may have been more impressed with your first moto, purely because you were quite aggressive with the guys. You did not get pushed around – I felt like you were the first guy to put your foot down and go, “I want this championship. I am not making it easy.“

Yeah, but I mean I am a clean rider. I do not want to play dirty, T-bone someone or take someone out. It is a championship though and, on a track like this, it is not easy to pass. It was not easy to pass. You have to be a little bit more aggressive, but even the passes that I made were nothing too crazy. It was just showing them a wheel.

The things that you should do! This is a motocross race and that is just fine.

Yes, exactly. Exactly. I did get a little arm pump in the first moto, so I did not really ride like I expect from myself. Anyway, we salvaged some points and finished fourth behind Jeffrey [Herlings]. We did not lose that much. I was definitely happy with the second one – that is how that I feel I should ride. I was more relaxed and had a good start, which helped a lot. I made quick passes in the beginning and rode my own lines to have a good race.

What was the mood when you came in from the first moto? Were you frustrated? Did you make any bike changes to help with the arm pump?

No, I did not make any changes on the bike. I knew that I just had to relax myself. It was kind of like I rode too tight. I always had someone behind me in the first moto too, so I could not open the door. I could not really ride my lines. It was a struggle all the moto – that was definitely frustrating. I know that I can do better. I was in front of both of them, Jeffrey and also [Romain] Febvre. They passed me after. I was definitely a bit disappointed with the first one, but the second one was good.

I guess the first time that you relaxed today was four laps into the second moto when your mechanic put plus five on the board and you were like, “I have got a clear track and no one is trying to hit me from behind. This is nice.”

I mean, yeah. It was definitely a good feeling. I could use my own lines then. I even made quite a big gap by the end. It was around 15 seconds halfway into the race! It was comfortable. I could back it off in the end – I did not need to risk that much on the last couple of laps. The track was getting really sketchy and slippery in some places. These are the races I like, yeah [laughs].

I remember you talking about starts back at Maggiora – you were saying that you were studying film and all that stuff. I do not feel like your starts are bad, but they are not amazing either. Have you got any ideas on what you need to do there?

We are working a lot on the starts. They are just a little bit inconsistent. They are not bad; I had one good start and then one was kind of average. We will definitely put a lot of focus on the starts this week. We all know that Mantova has a quite similar start to here. It is not just one perfect gate pick… You can kind of start from inside or outside. Like I have said many times, I think the starts are going to be really crucial and really important. We are all fast and it is not easy to pass. We are going to work on the starts and try to improve them. I feel that it is getting better and better. Still, something is missing.

Have you been using a scoop tyre at all?

That seems to be the move at the moment. Anyone who gets a holeshot is putting a scoop tyre on out there!

I saw that many, many guys were riding with scoops today.

Jeremy [Seewer] did it last Sunday, [Antonio] Cairoli did it on Wednesday and then everyone did it today.

Yeah. I felt that they have a little bit off an advantage on the starts – they always rip so it is quite soft on the starts. Around the track, you have to use the berms with a scoop and find dirt to lean somewhere. It is quite difficult to just turn without the rut. It is really slippery. It turned out to be a good choice for some of them. I did not want to risk going to the scoop. I tried in free practice this morning.

Oh, so you did give it a go to see what it felt like?

Everyone was trying. I said, “Okay. I will try for two laps just to see how it feels.” I came back to the MX32, the normal one that I use with Pirelli. It was good.

This is a big championship. There is a lot happening. How is it mentally? Are you stressed? Are you enjoying it? Your last two titles have been a bit boring. Is the competitive side of you enjoying this? How are you feeling upstairs?

I would say that it is definitely stressful. We all know that everything is going to be done in 10 days. There are three points separating three of us again. It is not easy, but from my point of view I just try to put that on the side. It is not easy like I said. The goal is still to go to the races to have fun, ride like I know how and try to put the championship on the side. It is easier to say than to do. You always have it in the back of your mind, the championship. When you go to bed you are also thinking about it. I think it is the same for everyone. We all want that championship – we are all going to give our best. The best guy is going to win in the end, like I have said many times.

What is the plan for this week? Are you going to ride like normal? Is there anything specific that you want to work on?

Yeah, I am going to ride. We now go to a sand, hard-pack track.

Yeah, weird. It is quite similar to Kegums. You have a little bit of sand on top, a couple of centimetres, and then underneath it is quite hard. The braking bumps are quite normal, hard pack braking bumps. We are going to work on the starts, like I said, do some motos and that is it.