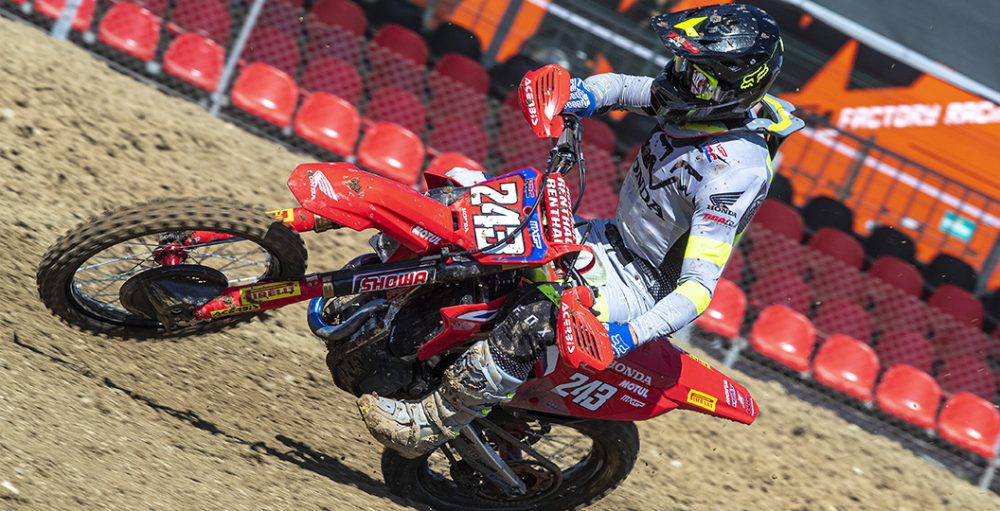 Tim Gajser did not win either of the FIM Motocross World Championship rounds in Turkey, yet the jaunt across to Afyonkarahisar was a success for the four-time world champ. Gajser won two of the motos there – the same as Jeffrey Herlings – and extended his series lead to 28 points. An impressive trip, especially considering it started in a worrying fashion. The way in which he rode in the first moto at Sunday’s Grand Prix of Turkey was not very encouraging at all.

Gajser managed to pick himself up, rebound and come out swinging within the space of two hours. Only a true champion possesses that quality. That’s discussed at length in this exclusive chat from the Grand Prix of Afyon, as well as the pressure of leading such a competitive title fight. Gajser is really quite open and honest. A pleasant surprise! This interview was originally posted as an MX Vice post-race podcast, presented by FLY Racing, on Apple Podcasts and Spotify.

MX Vice: Two rounds gone and no Grand Prix wins, but I feel like you have been impressive. The first moto on Sunday may have been your worst race in years, but the way that you rebounded and picked yourself up was very impressive. It was the same today as well, as you came out in the second moto and clawed back the points that you lost in the first.

Tim Gajser: Yeah, it was okay. I am quite happy. Of course, a bit disappointed and especially with today when I got passed like two or three corners before the end by Tony [Cairoli]. I was a bit disappointed with that. Overall though, I am quite happy. We took solid points and I have been consistent. Like you said, I was struggling in the first moto on Sunday and also got a little bit of arm pump after having a break and not racing for a month. I was a bit rusty. I needed one race to get into the rhythm. On both days, the second motos were really good. I felt really good on the track and made passes. It was a good trip.

Yeah, I knew. They were writing it on the board when the gap was four seconds and then three. The last couple of laps were like one second and a half. When Romain [Febvre] made a mistake, we both went in the same line. It was like a split line there. We both… Romain went, Jeffrey [Herlings] went and then I followed them. I think Tony went on the other side, the inside, because when Romain crashed we both slowed down a little bit. Tony came really close to me; I was going wide, doing a triple on the next jump, going wide again and carrying the speed into the waves. Yeah, I opened the door and Tony was there. I would do the same. It was my mistake to open the door, you know? Especially just a couple of corners from the end!

You took the lead in the second moto and what was really impressive is that you set the fastest lap of the race over and over. I think you did that five or six times. I guess that was the plan though, so that you would not have to deal with Jeffrey on your ass the whole time.

Yeah, I knew that I had to pass Jorge once I passed Jeffrey. It is easy to get stuck behind him and into his pace, and then it is difficult to defend and attack at the same point. I attacked Jorge immediately. Once I passed him, I made a really hard push for like four or five laps. I saw that Jeffrey followed me almost immediately once I passed Jorge, like a lap later he passed him. The gap was from like two to three seconds for the next five laps, because we were both pushing, but then I saw that he slowed down a little bit. I could also breathe a little bit then with three laps to go or something like that. I could just bring it home.

I guess you knew that you had to get around Prado quickly, because that is kind of what happened in moto one on Sunday. You got stuck behind Glenn [Coldenhoff] and then that knocked you out of your rhythm. You got stuck in his pace and just could not get out of it.

Yeah, exactly. That is what happened in the first moto on Sunday. I could not really pass him. I mean, there was a way to pass him. Everybody was just coming and passing him! I was just there and could not really make a pass. When I did pass him, he passed me back! I made a mistake and he passed me back. I started to ride a little bit too aggressive and hold the bike too tight – I got a little bit of arm pump in that first moto. That was game over. When you get arm pump, it is difficult to push. That was the case.

Coming into this double header, everyone thought you would be amazing here. It is fast, hard-pack and jumpy. It is Russia without the hills, you could say. You have never won a Grand Prix here, but it is kind of your track on paper. Do you feel that way?

Honestly, no. Okay, I like it. I like almost all of the tracks – you have to like them! The track is baked and really hard with bumps, like acceleration bumps, especially in the second motos. The bike cannot really follow and it is kind of difficult. It is not really enjoyable to ride. Anyway, I was struggling here in the past. Even in 2018 and then in 2019, when it was the race after I became the world champion. I felt okay this year. I felt good from the beginning. I had some issues. I mean, some problems and mistakes that I made. Overall, I am quite happy with the trip that we made to Turkey.

You said that the pressure was on your mind before Latvia, but the win there helped you relax. I think the two races here were almost bigger for you than Latvia. I feel like they were so positive across the board, especially how you rebounded on Sunday. You must be leaving here and thinking, “I have got this thing under control, as much as I can. I have got a good grip on this thing. Everyone knows how fast I am, I can pass Jeffrey and I can pass Jorge.” I feel like these two rounds ticked a lot of boxes for you.

Yeah, exactly. It is good for my mental side, because I know that I did my homework during the summer break. I was training hard and trying to improve on some things where we were struggling. One of them was starts. Starts are still not there, but we are working on it to be in the top three or something like that. Not seventh or eighth. You have to come through the pack then and risk so much more. It is not easy to pass the guys and especially, like I have said many times, the top five or six. We are riding almost the same pace. It’s difficult to make a difference. The feeling is definitely good. I have got some confidence back. I got a moto win on Sunday [for the first time] after Great Britain, so it had been a while. It had been a couple of months that I did not win a moto. I won the Grands Prix without winning a moto.

That must be a weird feeling.

It was a weird feeling, definitely. Now, this was definitely a good confidence booster and I am ready to go for the second half.