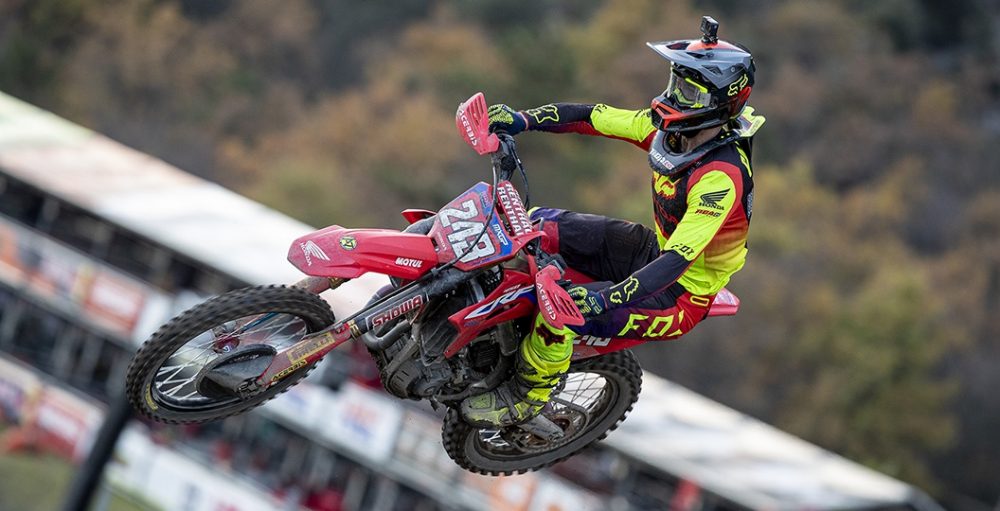 Tim Gajser is a four-time world champion, now that the 2020 MXGP title is firmly in his grasp. Gajser claimed his crown before the Grand Prix of Garda-Trentino, the last event of the FIM Motocross World Championship, but still pushed to the very end, as he took his fifth overall victory of the year and became the winningest guy in the premier. It was a great way to wrap up a phenomenal season, as Gajser states in the exclusive MX Vice interview below.

MX Vice: First of all, you won the world title. Brilliant! That is a good thing. You grabbed a couple of Grand Prix wins this week too. You have now had the most overall wins laps led, moto wins and podiums this season. I think that covers your season as a whole, because you have been insanely dominant in the last month. That has kind of continued here.

Tim Gajser: Yeah, exactly. Like you said, it has been just an incredible season for us. I won the world title already on Wednesday. Today, ending the season with a Grand Prix win, was just amazing. The beginning of the season was basically really good. In March I really started good. I was feeling great and then there was a long break. When we came back in Latvia and then at Faenza, plus the first two rounds at Mantova, I was struggling. I was missing that consistency. I was just doing one moto good and then the other would be so-so.

Once I won my first Grand Prix at Mantova, everything started to click. I was just getting better. I got a little bit confidence back. I started to believe that I could do it again. I start to win motos and overalls from then on. I was more consistent. We were working a lot on the starts too. Overall, looking back, it was a great season. It was a weird one, let’s say, with the COVID-19 and everything, but it was a nice one in the end.

One quick thing about today. You and [Romain] Febvre had amazing battles and he was ridiculously good in sector three. I know the mechanics put it on your board every lap. Firstly, you did good and actually upped your times to almost match him. Do you have any idea what he was doing on that part of the track though? You were faster everywhere else.

Yeah. It was kind of like I was struggling there at all three GPs, so let’s say all of the week. I always lost the most time there, even when we were doing our laps in qualification. All of the other sectors were the same, but I lost one second and half or something like that in sector three. When he passed me in the first moto, I could follow him. I could always hear that I was faster on the other parts of the track.

When we came to the downhill, and then went back up and down, he always came really close to me. I followed him. I watched where he was going. I picked his lines, because he had good lines, and then I could match his time. I think we were quite similar in the third one too. Anyway, it was a nice battle. Romain was really fast. We both had good, solid starts in the top five and could battle from the beginning. It was a good last GP of the year.

Your season as a whole is actually quite confusing to look at. You were amazing at Matterley Basin and Valkenswaard. You and Jeffrey [Herlings] were clearly on another level. Then, like you said, we came back and you were in the mix with [Antonio] Cairoli and [Jeremy Seewer]. Now, again, you are back to the Tim from the start of the year, who separated from everyone else. Was it really just winning that first overall in Mantova and getting the monkey off your back?

Yeah. I think it was the overall win. When I won at Mantova, that was like the turning point in the year. Before that I had many moto wins. I think before that race I had won seven or eight motos but had not won the overall. That’s what I said. I was not consistent. One moto I would get a good start and have a good moto, then I would have a bad start in the other one. Like we all said many times, it was really difficult to pass. When we came back after that long break, everyone was in shape. Everybody was fast.

Everybody recovered from the injuries that they had at the beginning of the season and that is why it was really intense. The starts were really important too. Even if you start in the top seven, that’s normally a good start. You would just want to be in the top ten and work from there, but now it was difficult. It was difficult to pass the guys. Even some tracks didn’t really allow a lot of passing opportunities, especially Faenza. I remember it was kind of like one-lined. The racing was really intense. I remember that there, many riders, were within one second on one lap.

It is funny, because people can go so deep trying to find a reason. It really was as simple as you just needed to win an overall and get the monkey off your back. Even thinking about it now, you won… Before then, I think Imola last year was your last win. You waited fourteen months.

No, you didn’t! You won the title at Imola.

Lommel was the last one, so that was basically August.

Fourteen months you had to wait for your next overall win. I can imagine that did start to play with your head and you were like, “What the hell is going on?”

Yeah, exactly. We had a long break too of course and didn’t race during the summer. When we came back in Latvia, from the beginning I didn’t like the one-day schedule. It was something new to everyone, but I prefer two days to get more track time and adjust the bike a bit more. That was kind of new. I always got arm pump in the first motos at the beginning. If I remember correct, the first three rounds at Kegums and then even at Faenza I had arm pump in the first moto.

After that was better, because I got one moto under my belt on the same track. I was kind of struggling but afterwards I could really relax, like after I got the first overall win at Mantova. After that everything started to click. Everything kind of went back to normal and to the right direction. From then on, like we said, everything started to click. I was scoring good starts. Starts were really what I was struggling with, also in the beginning.

Looking back at your season now, it is still very crazy to look at your results and see Lommel was your strongest week of the year. Even now, we’re two weeks on, it should have settled in by now. 2020 was a weird year with COVID and everything. That may be the biggest story even more than COVID.

Yeah. Lommel was really… Even myself, I was surprised with how well I was riding and the consistency that we had there. I won two GPs and I was second one time. Going to Lommel, I knew that Jorge [Prado] was living there. Tony lived there in the past too and was always fast on the sand. That’s why I put a lot of effort into training on the sand during the winter. It pays off. We can see that I was really relaxed on the track. I really enjoyed riding at Lommel this year. That’s definitely good for the future and was kind of like the weakest point, where I was struggling the most. I’m really happy and glad that I feel comfortable going racing in the sand now.

You are jumping straight into testing for next year this week, at this track actually. Is there one thing that you know you need to work on or improve? Do you already have things in your head?

Like I said many times, I’m really happy with the bike. We are planning to try some different things, like always. Engineers in Japan, they are working full-time always to get the bike even better. It’s so impressive. They bring something new and then you say, “How can they do even better?” They always came with something new and that is even better. Like you said, we are starting to test on Tuesday. We basically have just one day off and then already start on the new season.