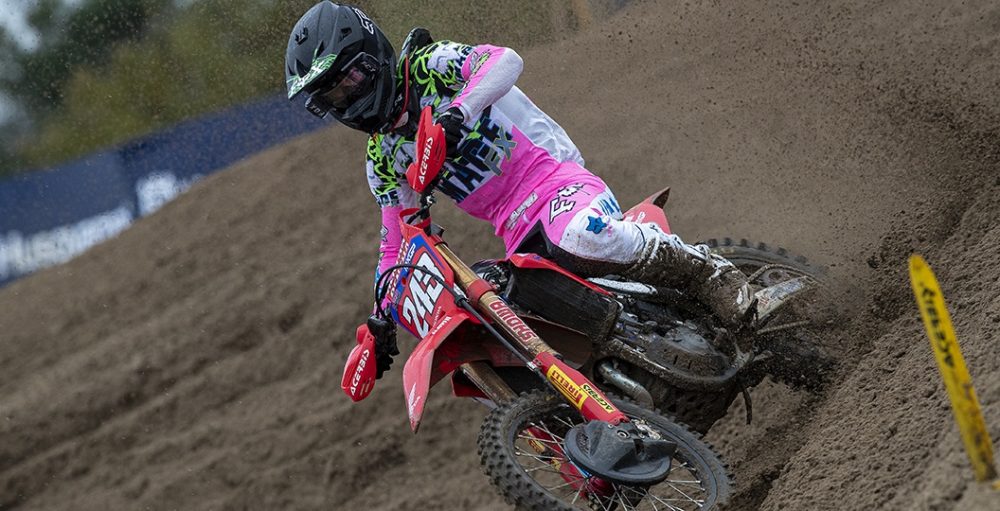 Tim Gajser has never been considered a contender in the sand. In fact, races at tracks like Valkenswaard and Lommel have often been a black spot on his record. That has changed now though; Gajser won four out of six motos, two of the rounds and extended his series lead by 50 points. It does not get much better than that for the Team HRC star! Gajser talks about all of that, as well as the run towards the chequered flag in Italy, in this exclusive MX Vice interview.

MX Vice: I genuinely do not know what to say, because you seem to be a sand king now. I don’t really understand how this has happened! Before it was a struggle for you to win in the sand. Now you can crash and still win! A perfect day. You are just in a great place at the moment.

Tim Gajser: Yeah, I’m super happy about how things are going at the moment. Like I have said many times this week, and it’s weird to say, but I really enjoyed it. I’ve also really enjoyed the whole week, all three races here. The more that the track was rough the more I was enjoying it, because I could take a lot of time from the other guys and do things differently. I had a lot of fun out there. I think that’s a big plus and a big key to success, to have a good race. Even today, with two holeshots, it was easier, because I did not get roosted. I threw it away immediately on the first lap of the second moto. I had to work really hard during the moto to come back to first place and even win with a comfortable lead. I’m super happy.

I know you said that you have always been quite good in the sand, but you got psyched out coming here. Had I told you a week ago that you would be very dominant all week, and easily the best guy in the sand, would you have believed me? Did you actually believe you were capable of doing this or have you even surprised yourself?

I surprised myself a little bit, but I knew that I was getting better in the sand. We really focused a lot on the testing  and how to set the bike up this year, with a completely new Honda that we have now had all year. I was feeling that I could do well, but did not know that basically I would be the fastest on the track every time we went out there. That’s definitely a good feeling.

I remember asking you this in Valkenswaard, but we will do it again. Does the new bike have anything to do with your sand improvement? Does that make it easier for you to handle out there? Does the bike get any of the credit?

I would say the bike is definitely way better than it was last year. We made a huge step forward. I was working really hard during the winter, improving myself where I thought that I was not the best. We’re always like that. You always try to find the weak points and work on the weak points, as a racer, and definitely sand was one of it. We work really hard together with the team. I’m super happy that everything is paying off, all the hard work.

I would say that you are better than ever right now. Take the Tim from 2019, who did win at Lommel, and make a comparison. I feel like you are far, far, far better than that. Do you think the same?

I would say yes, especially with how I feel on the bike. With the bike I feel really comfortable at the moment. I would definitely agree with you.

I think you have got a 74-point lead now, around there. I know we are allowed limited fans in Trentino. Are they all going to be Slovenian? I could see that.

We are living in a weird world at the moment, with COVID and everything. I don’t know. We will see if they are even going to allow people from Slovenia to come to Italy, because with the borders we have a lot of problems. Even me, I’m not going back to Slovenia. I’m gong straight to Italy on Tuesday, because of that. We will see. I think a thousand people are allowed on the track. We will see. I hope to have some fans there, yes.