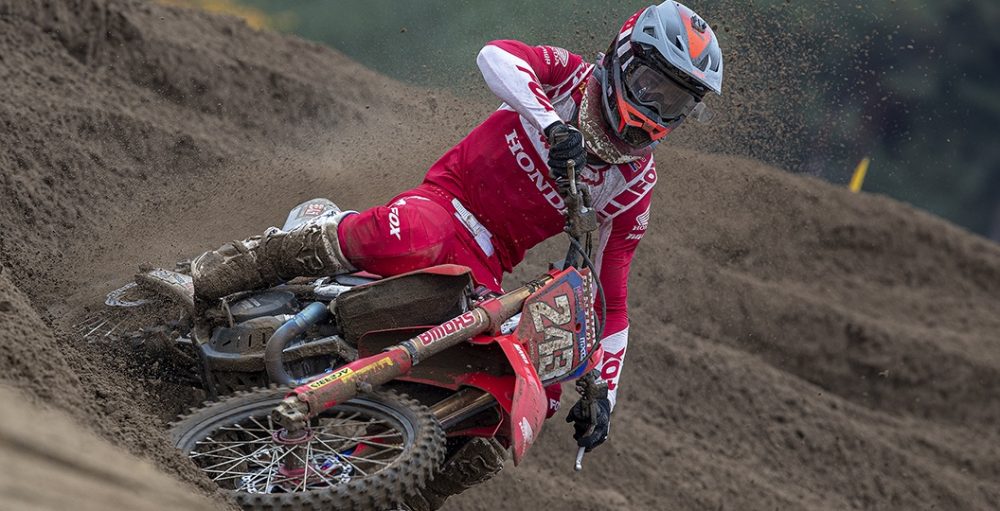 Tim Gajser was not exactly tipped to dominate at the Monster Energy MXGP of Flanders, yet that is exactly what he did. Gajser was incredibly impressive, en route to his second overall win in the bottomless sand, and doubled his series lead! 48 points is his advantage with just five rounds to go, so things look very good for the Team HRC camp. MX Vice editor Lewis Phillips caught up with Gajser after Lommel 1 to discuss his transformation in the sand.

MX Vice: I know your win here last year meant a lot to you, but that was with a 2-2 scorecard. I’d imagine this win, with a 2-1 that could have easily been a dominant 1-1, is a big one for you, huh?

Tim Gajser: Yeah, it could have been. I made a mistake in the first moto and crashed. I finished second and then I was feeling great on the bike in the second moto – I was just feeling really relaxed. I’m super glad that finally I’m getting that feeling in the races too. I usually have that in practice, but whenever the race at Lommel came I kind of like get psyched [out] and am not relaxed at all. Now, I’m super happy. Finally, everything came together and I won my second overall of the year.

Do you not actually think you have gotten better in the sand in the last year or so then? Have you always been this good? It just has not shown at the races, I guess?

Yeah! The last couple of years we definitely did a lot of improvements, especially in the sand. I would say that this winter (and the last winter) I made the biggest difference that I have made. We trained a lot this winter as well, basically through all the winter I was just riding sand tracks. It has definitely worked.

I’m guessing that even with your win last year, coming into here today, that was in the back of your mind. You won last year, so why not it today? That must have given you a boost.

Yeah, exactly. It’s not easy though. We all know that the track in the race is going to be really tough here at Lommel, so you really have to be on top of your game. You just need the starts too. We all know that the starts are really crucial this year – they are really important. I managed to take two solid starts. I came in the lead quite quickly in both motos. Like I said, the first one I threw it away and finished second. I made a comfortable lead in the second one and then controlled the race.

Oh! Speaking of your starts, I have no idea how you did not get the holeshot in that first race. That might be the most perfect start I’ve ever seen you do. Literally, I could not believe what I was seeing.

Yeah. I thought also that I got it [laughs]!

Then from nowhere, [Dylan] Walsh just came from outside and carried so much momentum. I was second, but still I was happy with it.

It’s definitely a different track compared to last year, especially because we are here in the cold. Before we were here in August and during the summer, so the weather was way hotter. The track was drier as well. It was like dry sand, like beach sand. Today it was quite dark, quite heavy and heavy for the bikes too. Even the bumps and the ruts were different compared to the normal Lommel. Anyway, it was quite rough.

Yeah, that is good. I did not even check how much the points lead is at the moment, because I just want to go out there and have fun. I want to enjoy it and leave my best every time I’m out there. Still, we have five GPs to go before the end. I hope that we are going to enjoy it a lot.