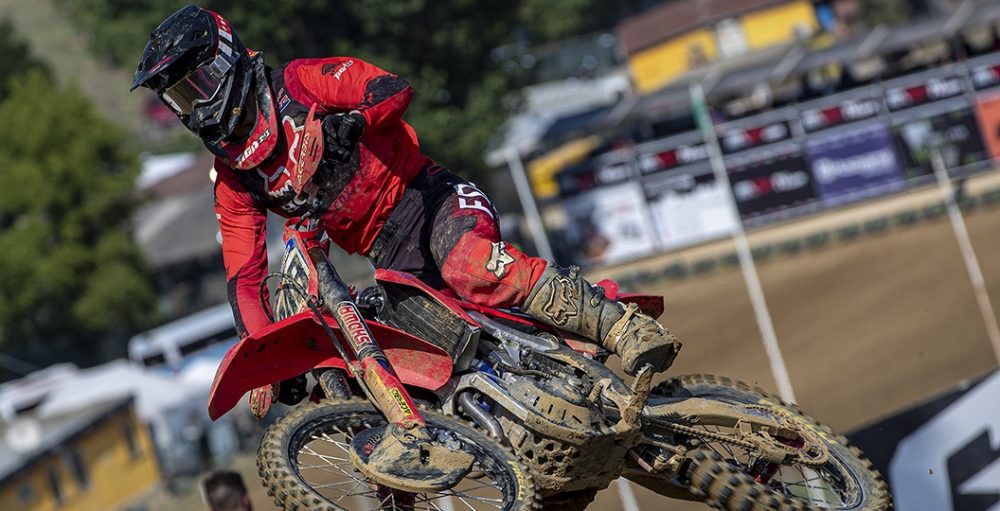 Tim Gajser enters the Faenza triple header facing a deficit of 46 points to the championship leader, but leaves just seven behind. It was a productive week on Italian soil! Gajser reflects on that, as well as some mistakes that were made along the way, in this exclusive MX Vice interview from Sunday evening. This interview was originally posted as an MX Vice post-race podcast, presented by FLY Racing, which is available on iTunes and Spotify.

Tim Gajser: Yeah, exactly. I’m quite happy with the whole day, let’s say. Had a little crash in the first moto on the first lap that cost me a couple of positions, but I climbed back to fifth. In the second moto I got a solid start – top five or something like that. I made quick passes in the beginning and then a little gap, like four seconds and controlled the race. The start was key on this track. If you could pull the start inside the top five then you had a chance to win it. Overall, quite happy.

With that little crash in the first moto, you obviously went for a pass on Tony [Cairoli] quite early on. Do you regret trying it there? I don’t think many passes were made there all week. I think you may have been the only one who tried it!

I saw the opportunity – he didn’t go defensive. He left me door open. I think he heard me and that I was coming on the inside. Then in the last second he closed the door and we came together. I crashed and he just drove forward. If I could turn the time back now, I wouldn’t do that.

It’s funny. You were only like tenth when you got back up but I was like, “Oh my god. I don’t know how he’s going to make passes around here.” To be fair, you passed people quickly and they were tough guys like [Clement] Desalle and [Gautier] Paulin. I was thinking that you were going to spend the whole race looking at the back of their jerseys.

Even me! Especially when I came behind Paulin, because I remember first GP here last Sunday. I couldn’t pass him. It was really difficult to pass him. I made quick passes and then towards the end I pass [Alessandro] Lupino, so finished in fifth. In the second moto, I would say that maybe today was not so tough to pass the guys. Even in the second moto I did not have a great start. I was there. I managed to make quick passes in the first couple of laps and then I was in the lead. The track was, let’s say, more open today. You could change the lines – you could use some outside lines and they were fast enough.

A lot of riders tonight have actually started to talk about how tough [Jorge] Prado is to pass. Normally all anyone wants to talk about is Desalle and Paulin. Now people are saying Prado as well, because he has holeshot so much that he just knows how to control the race. Do you feel he’s quite difficult to get around? Obviously, you did it quickly in the second moto.

Yeah. Prado is known as a good starter. I think this year every time the start is really important. If you take a holeshot and if you have a clean track in front of you, you can just ride your lines. Nobody roosts you. You can ride like you know. That definitely helps him a lot. Like I said, in this track this week let’s say that it was not easy to pass anyone. It was quite tough. I think you need to be a little bit more aggressive.

Obviously this is the second time we have done the triple header. When we did it in Latvia, everyone was just happy to be racing. Now that we have done it for a second time, was this harder on you than Latvia was? I think it was a bit hotter here as well. Did you feel it more this week?

I really was quite okay. Yes, we raced three races and three GP’s in one week. It’s just a one-day format so it’s not so… Okay, it’s physical. We ride for 35 minutes twice, but for Latvia I would say it was a little bit better. They always changed the track a little bit or at least some jumps. Here all three GP’s the track was basically the same. They did some doubles on the inside, but barely nothing. It was difficult because of the layout and everything, of course. It was difficult to make big changes. In the end, when you do six motos on the same track it’s kind of boring in the end. It was the same for everyone.

You have only got one weekend off heading into Mantova. Do you think that triple header will be tougher, because there is less time to recover from this one? I guess the track could be a bit better. They have got more room to make changes there, so that’s good.

Yeah, exactly. We have enough time to recover. It’s one weekend off. Mantova, with the layout, I think they will be able to do some changes between first and second and then the second and third GP. I’m really looking forward.