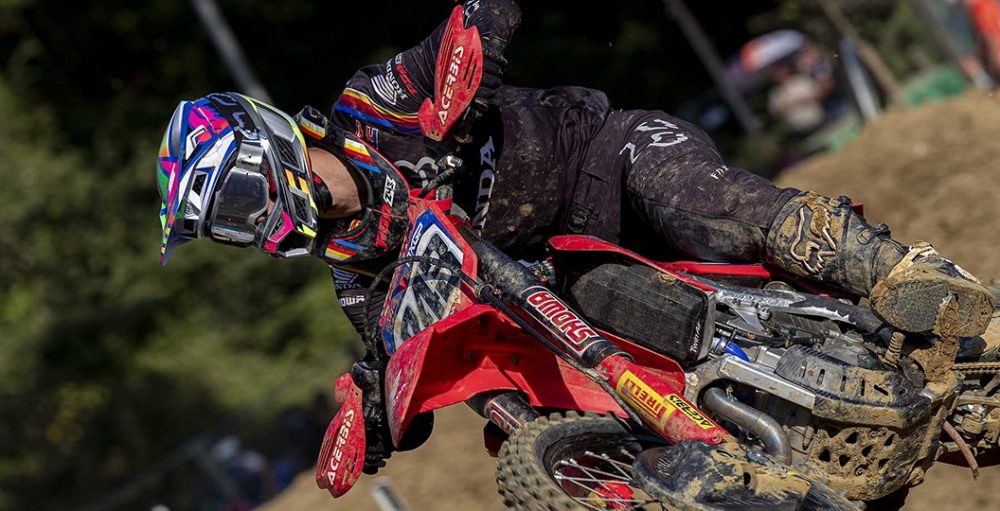 Tim Gajser had endured a tricky couple of events in the 2020 FIM Motocross World Championship, but got things back on track at the Grand Prix of Citta di Faenza on Wednesday. Gajser won a moto, finished second overall and took 41 points out of the deficit that he faces to the current championship leader in MXGP. What did Gajser make of everything that transpired at Faenza 2? An exclusive MX Vice interview, which was originally posted as a FLY Racing post-race podcast, is below.

MX Vice: A really good day for you. Better than Sunday. Although, actually, we’ll start with this. I had a lot of people messaging me saying, “What happened to Tim on Sunday?” You rode really, really well. You just didn’t have the starts, but I think you had the second-fastest lap time in the second race. You were the fastest on track in both motos at points. First of all, your speed’s been good all week. You just need a good start around here.

Tim Gajser: Yeah, exactly. The last couple of rounds have been a struggle. We have had a lot of bad luck. I did many mistakes and many crashes. Speed was good, like you said, on Sunday, but I just did not get a start. I was always in the corner. They closed me down and then I was back in the pack, so it wasn’t easy to come back. Today I managed to take two solid starts, both times in the top six. I think I was fourth and fifth, something like that. In the first moto immediately after a couple of laps I lost my goggles though.

Actually the strap just broke and the goggles fell off. I was like… I didn’t know what to do, because the track was really not the one to ride without goggles. The roost was big! It was painful, but I managed to somehow finish in fifth place. In the second one I knew that I had to take a good start. Again, I think I also ran fifth from that. Made quick passes in the beginning, in the first couple of corners, and then I was behind [Jorge] Prado and pushing him.

It was not easy to pass him, but he made a mistake. I was in the lead and made a little gap, around four or five seconds, and then I controlled the race. I’m really happy that I was in front, that I was where I think I belong in the second moto and hopefully in the future. I think the start’s getting crucial. It’s really important to have a good start, especially on this kind of track where the pace of everyone is really together. We are all within one second, the top seven or something like that. I’m happy with the day, let’s say.

Actually, that reminded me. Your starts were bad on Sunday, but typically I think you are quite a good starter. From what I remember, your starts in Latvia were quite good. At the beginning of the season they were quite good. What’s changed? How come they have suddenly got a bit average?

I just didn’t get the good jump off the gate on Sunday. In both motos I made a little mistake. When you are on the clutch with the fingers, when you relieve the clutch. You make that little mistake there, then they close you in and  you are behind. You cannot do anything. Let’s say that maybe I was not focused enough, so I was working on that and really focussing on the start today. I wanted to get a good start and do consistent laps, then not make mistakes. That was the plan for today.

I guess with the quick passes in the second race, you just knew how easily you could have got stuck behind people like in every other moto. You just wanted to get to the front and get out of there.

Yeah, exactly. That’s what I want any moto. Sometimes it’s really difficult when you have a bad start, especially if you start behind someone like [Clement] Desalle. Even him, I remember on Sunday that I couldn’t pass him. I was faster, but I could not pass him. He takes all the inside lines. I just couldn’t. It’s important to try some new lines. With the passing you have to be really a little bit more aggressive here on these kinds of tracks, where the passing is not so easy.

With the bad luck to Jeffrey [Herlings], the whole championship has tightened up a little bit now. That makes up for the bad luck that you had in Latvia and stuff. It sucks for that to happen to Jeffrey, but now this is almost like a fresh start. You can just focus on not having those little issues that you have had.

Yeah. I don’t want to gain the points or stuff like that when someone is injured. That’s motocross. A little mistake and something can go wrong. It’s the sport. It can happen to everyone. I just wish a quick recovery to Jeffrey. I don’t know exactly what happened. I didn’t even know that he crashed! Just wish him to be back on the bike soon and at the races with us, so we can have good battles.

Yeah, exactly. It’s a hard sport. It’s never easy. Just you always have to pick up yourself and go forward. That’s the key everywhere, in all sports.

Speaking of going forward, we have got one more race at Faenza. Is there one thing that you’d like to improve with bike set-up or anything? Anything you are struggling with that you would like to fix?

I am quite happy with the bike. Even when after Sunday we were a bit disappointed with everything, I did not change anything. The bike was good! It was just me. I have to take a good start. That’s what it all takes. Basically I didn’t change, not even a little bit the bike, from Sunday to today. Even for next Sunday I’m going to continue like that.