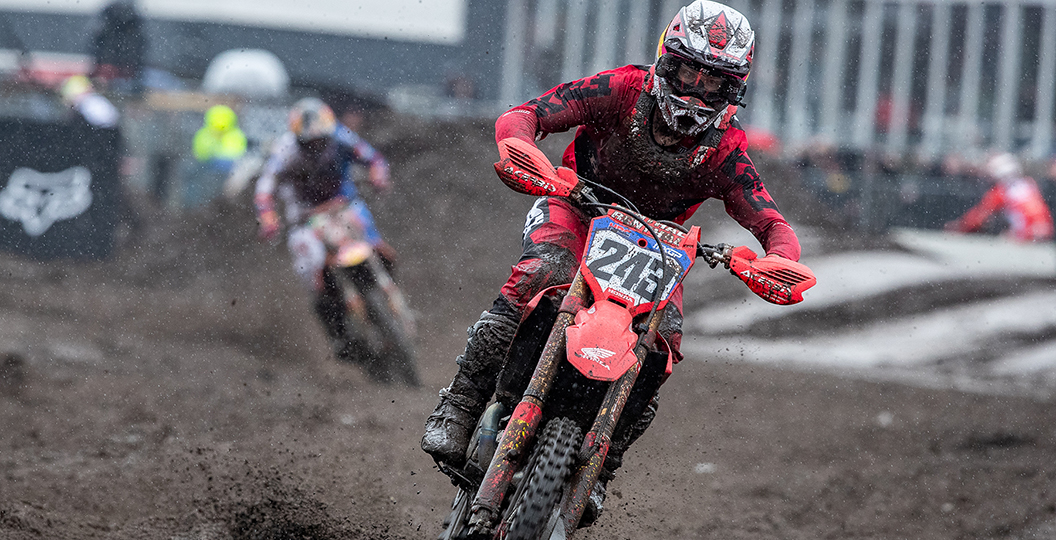 Tim Gajser has had some memorable moments at the historic sand circuit of Valkenswaard, but very few of them have been positive. Until now, that is! Gajser hit new heights at the Grand Prix of The Netherlands and challenged Jeffrey Herlings for the overall win at a place where he has rarely been challenged. What made the difference? MX Vice editor Lewis Phillips caught up with the reigning world champion following the podium celebrations on Sunday evening.

MX Vice: It is fair to say that Valkenswaard has kicked your ass over the years. I do not know what has happened in the last twelve months, but you seem to have mastered the thing. Not only were you good today, you ran the same speed as [Jeffrey] Herlings and tied on points with him. A perfect weekend, I would say.

Yeah. Actually, it was not perfect…

Yeah. With today, I am super happy. I could not ask for better points or a better race. I did not have the best gate pick, so that made my life a bit tougher from the start. I managed to make two solid starts and quick passes at the beginning, which was really important to not get stuck behind the guys and fall into their rhythm. Super happy with the first one. I rode a perfect race. In the second one I made a little mistake at the end. It was really easy to make a mistake, because there were so many soft spots. Even with the goggles on the second lap, I did not really see a lot through my lens. I kind of struggled all of the moto. I could ride with the same speed as Jeffrey though, so I was happy.

I do not understand how you got those starts from the outside. Maybe a miracle happens once, okay, but to do it twice? The first one you fully sent it into the first corner…

Yeah. Already from yesterday I was thinking about the starts, because I know that Valkenswaard is one of the tracks where you really have to make a good quali race to have a good gate pick, because the first couple of gates are the best – they are straight on the first corner. I was really putting a lot of focus on the starts to really make two perfect starts, and I managed to do that, so I am super happy.

During the winter we really train and test a lot in the sand. Basically, I was just riding sand and not even hard-pack. Super happy with how we set the bike up. The bike was really working nice. Definitely that helps a lot. Even the speed was really good. I am super happy. I could not ask for better. Did not surprise me, because even in the training I was very fast. I was trying to bring that training rhythm to the race, and it happened this weekend. I am super happy.

I think it is fair to say that, including the second moto last week, this is the best you have ever been. Forget about all the overalls wins and titles you have had. I genuinely believe you are riding better than ever right now.

I totally agree with you. I am feeling so good on the new Honda and in great shape. The season is still really long, but we begin the season on a really high note. I will really give my best to continue like that during all of the GPs.

Sure. Honda did an amazing job with the new bike, also the whole team. We were really putting hard work in and testing a lot when we tested during the winter, training a lot to make the bike like I want. We managed to make an amazing bike in the end.

If I told you at the start of the year that you would tie on points with Jeffrey here and not lose any points, you would have taken that. It is early to talk points, championship and everything, but this is a good thing.

Of course. Especially here in Valkenswaard, because in the past I kind of struggled. Always something happens here. This year was just amazing. It is good.